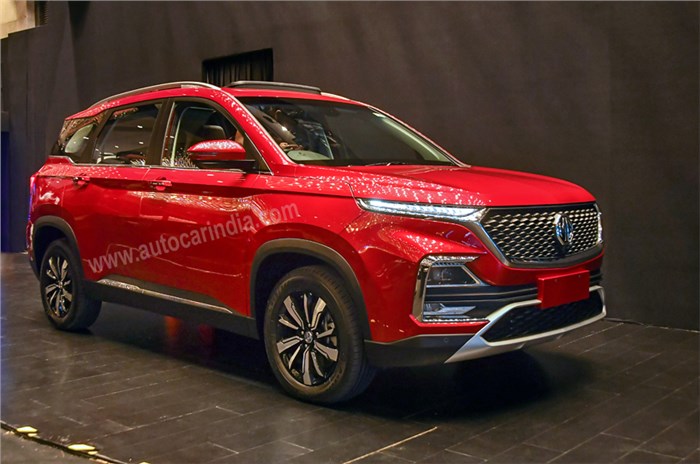 After all the spy pictures and leaked documents, the MG Hector's India reveal has finally taken place today. You've seen it pretty much from all angles courtesy the spy shots and even gotten to know plenty about its connected infotainment system. Now, it's time to take a deep dive into the MG Hector's details.

At 4,655mm, the MG Hector is longer than the Tata Harrier and Mahindra XUV500 and the first thing that hits you about it is its sheer size. This is a big SUV, and while it isn't as wide as the Harrier or as tall as the XUV500, it has the longest wheelbase – 2,750mm. The Hector's boot can carry up to 587 litres of luggage. The design could polarise opinions, as many will view it as a bit too heavily influenced by China (and the Hector is indeed identical to the Baojun 530 in many ways) but there are a number of neat design touches, including the slim LED DRLs placed above the projector headlights, the chrome-encased, matte-finished 'star-rider' grille, the blacked-out pillars and the prominent creases on the bonnet. That said, the MG Hector's 17-inch wheels – wrapped in 215/60-section tyres – look a tad small on an SUV of this size, an issue accentuated by the black finish on the wheel rims.

On the inside, the clean-looking dash houses the centrepiece of the MG Hector – its 10.4-inch, portrait-oriented touchscreen. Named the iSmart, this touchscreen houses a host of connectivity features, powered by an embedded Airtel SIM card. There's faux leather on the seats, dash and door panels, and what you'll also notice is the sheer space inside the MG Hector's cabin. It's a five-seater (also available as a seven-seater abroad), there's tons of space for the front and rear passenger, and the airy feeling on the inside is further heightened by the SUV's massive panoramic sunroof.

Last night, we told you there will be a total of 13 versions of the MG Hector. MG is aiming to give the Hector a wide price bracket, and so, will offer it in four trim levels – Style, Super, Smart and Sharp.

The entry point to MG Hector ownership will be the Style variant, which misses out on a number of features, including the portrait-oriented 10.4-inch touchscreen infotainment system. It’s also likely to get steel wheels and wheel covers, unlike the Smart and Sharp models, which will come with 17-inch alloy wheels. That said, the light-on-features Style variant will allow MG to price the Hector aggressively.

Sitting a notch above the Style variant will be the Super trim, which gets the large touchscreen unit with Apple CarPlay and Android Auto, cruise control, LED tail-lamps, a reverse camera and more. Above that is the Smart, which will get MG's much-hyped iSmart connectivity suite, power-adjustable and foldable ORVMs, a six-way power adjustable driver's seat, push-button start with keyless entry and faux-leather upholstery.

As for the range-topping MG Hector Sharp’s features, the list includes a 360-degree around-view camera, a four-way power adjustable co-driver’s seat, a massive panoramic sunroof, heated ORVMs, rain-sensing wipers, automatic headlights and mood lighting with eight colours. As has been revealed already, the Hector’s iSmart connectivity feature suite – accessed via the 10.4-inch touchscreen infotainment system and available only on the Smart and Sharp trim levels – will include AI-powered voice assist, pre-loaded apps and the ability to receive over-the-air updates.

In terms of safety features, the MG Hector gets two airbags, ABS with EBD, ESP, traction control, rear parking sensors and disc brakes on all four wheels as standard; the Smart variant gets four airbags while the Sharp gets six airbags.

The MG Hector’s engine options include a 1.5-litre turbo-petrol engine producing 143hp and 250Nm of torque, and a 2.0-litre, FCA-sourced diesel making 170hp and 350Nm of torque. As it stands, both engines are BS4-compliant only. While a 6-speed manual will be available with both engines, the turbo-petrol also gets the option of a 6-speed dual-clutch automatic gearbox. Also on offer will be a 48V mild-hybrid petrol variant (with the 6-speed manual gearbox only) which is said to be 12 percent more fuel efficient than the petrol-only variant. The mild-hybrid system will also provide up to 20Nm of additional torque at low speeds to help counter turbo lag and allow improved acceleration in stop-start city traffic. The MG Hector's fuel efficiency is rated at 13.96kpl for the petrol and dual-clutch auto, 14.16kpl for the petrol-manual and 17.41kpl for the diesel version. There is no AWD system on offer with the Hector.

It has now been confirmed that the MG Hector's India launch will take place in June 2019, and when it does go on sale, the MG Hector’s price is expected to be in the Rs 15-20 lakh range (ex-showroom), which will see it go up against the likes of the Tata Harrier and the Jeep Compass. MG Motor will have 50 dealers – with up to 120 touch points – across India to begin with at the time the Hector launches.