The upcoming MG Hector seems like a compelling package. But how does it compare with its closest Indian market rivals on paper? 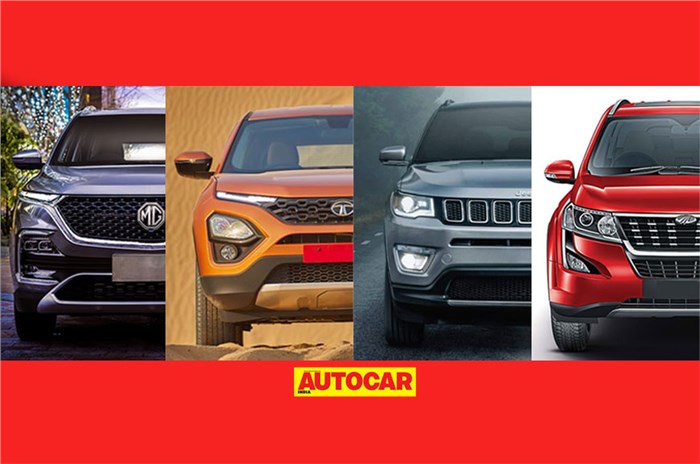 The MG Hector has received its official unveil in India and the SUV sure has got a lot of people talking. It’s got the size and specifications to interest Indian SUV buyers.

While we’ll only drive the Hector sometime next month, we’re curious to know how MG's SUV stacks up against rivals such as the Tata Harrier, Jeep Compass and Mahindra XUV500 on size, power, fuel economy et al. Read on for the details.

In terms of dimensions, all SUVs here are similar in size. However, it’s the Hector that it the longest of the lot; both in terms of overall length and wheelbase. The MG also has the largest boot at 587 litres; but the least ground clearance at 192mm. The Tata Harrier is the widest, while the XUV500 is the tallest – and the latter is the only one to come with the flexibility of seven seats, which explains why it's got the least boot space. The Compass is the smallest SUV in this quartet but it does have the highest ground clearance, something that off-road enthusiasts would appreciate.

The upcoming MG Hector will be available with petrol and diesel engine options. The diesel engine on offer is a Fiat-sourced, 2.0-litre unit and happens to be the same (albeit differently tuned) unit that powers the Compass and the Harrier too. In the MG, the motor makes 170hp and 350Nm while in the Jeep it produces a marginally higher 173hp and 350Nm. In the Tata Harrier, the 2.0-litre motor is in a lower 140hp/350Nm state of tune. All three SUVs come paired with a 6-speed manual gearbox only. Meanwhile, the XUV500 is powered by a 2.2-litre unit that produces 155hp and 360Nm of torque; the latter figure being the highest in this comparison. The diesel Mahindra is also the only one with the option of an automatic gearbox (a 6-speed torque converter unit) – a feature that all the others miss out on. In terms of fuel efficiency, the MG Hector sits on top of the pile despite being said pile's second-best power output. Interestingly, the Mahindra XUV500, in both manual and automatic forms, is the least efficient of the four SUVs. The front-wheel drive Compass diesel comes in a close second to the MG Hector in terms of fuel efficiency.

In terms of petrol engines, the Hector is powered by a 1.5-litre turbocharged unit that puts out 143hp and 250Nm of torque. Gearbox options include a 6-speed manual and a 6-speed dual-clutch automatic. The MG will also be offered with a 48V mild-hybrid petrol variant (with the 6-speed manual gearbox only) which is claimed to be 12 percent more fuel efficient than the petrol-only variant. Additionally, the mild-hybrid system will also provide up to 20Nm of additional torque at low speeds to help counter turbo lag and allow improved acceleration in stop-start city traffic.

The Compass has the smallest petrol engine here in terms of displacement (1.4 litres) but, it does produce the most power (163hp). The Jeep’s turbo-petrol motor can be had with either a 6-speed manual or a 7-speed dual-clutch automatic gearbox. The XUV500 petrol is powered by a 2.2-litre unit that produces less power (140hp) but more torque (320Nm) than the MG and comes coupled with a 6-speed torque converter automatic gearbox only. The Harrier does not get the option of a petrol engine for now but, Tata is expected to introduce a new 1.6-litre turbocharged unit in the SUV sometime next year. Fuel efficiency-wise, the Hector petrol-manual is claimed to deliver 14.16kpl while the automatic is rated at 13.96kpl. The Compass is slightly more fuel efficient, with the manual rated at 14.3kpl and the automatic returning 14.1kpl.

So there you have it. The MG Hector is well-matched with its competitors in terms of dimensions and engines. However, we will reserve our final judgment till the price is revealed and we’ve gotten behind the wheel – only then will we be able to confirm if the Hector is truly a viable alternative to the Harrier, the Compass and the XUV500.