The Hector will one-up rivals by offering petrol, diesel and petrol-hybrid engine options; dual-clutch auto ‘box only on offer with the petrol motor. 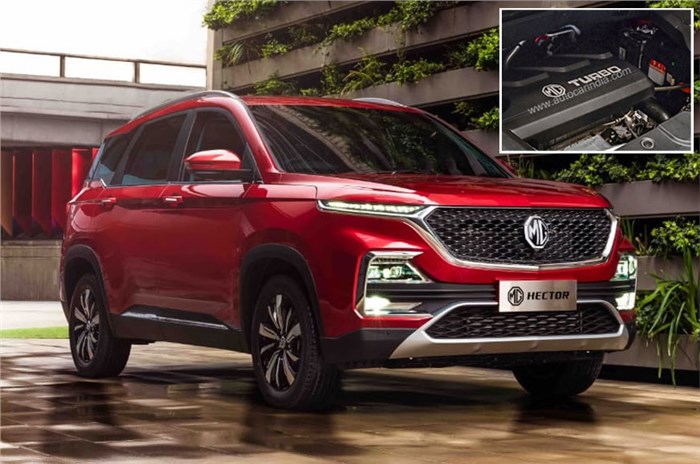 After months of drip-feeding teasers and details, MG Motor’s first model for India has been officially revealed, confirming that the Hector SUV will come with four engine-gearbox setups. The petrol engine can be had in combination with three combinations – with a 6-speed manual, with a 6-speed dual-clutch automatic and with a mild-hybrid and 6-speed manual. On the other hand, the diesel is offered with just a 6-speed manual transmission. The petrol and the diesel engines are both, BS4-compliant, for now.

Based on its drivetrain, size and expected price, the MG Hector will rival the likes of the Tata Harrier, Jeep Compass and Mahindra XUV500. On paper, it seems like the Hector sits between its rivals.

While the Jeep Compass has the most powerful petrol engine, the Mahindra XUV500’s larger-displacement petrol motor has the most torque. The Harrier misses out by not offering a petrol option, for now. In terms of gearbox options, both the Hector and Compass get manual and more sophisticated dual-clutch automatic units while the XUV500 petrol makes do with a single torque convertor. With the Hector, MG has introduced a segment-first – namely a mild-hybrid option for the petrol. The 48V mild-hybrid system assists the petrol motor in a number of ways, including adding 20Nm of torque when the turbo is off-boost, improving fuel efficiency by a claimed 12 percent and reducing emmissions by a claimed 11 percent.

When it comes to the diesel engines these SUVs are equipped with, the Hector, Harrier and Compass all have FCA’s 2.0-litre four-cylinder turbocharged motor, albeit in different states of tune. It will be interesting to see how this translates to on-road performance and overall refinement. Like with the petrol engines, the XUV500’s larger-capacity motor makes the most torque, although the Compass has the most outright power. The Tata Harrier has the lowest overall output figures by a 15hp margin, even though its torque figure is the same as the Compass and Hector’s.

However, the Tata Harrier does debut a segment-first – its diesel engine comes with three drive modes that adjust throttle response and affect fuel efficiency. The Tata also has a terrain response mode that alters the ESP settings.

While all the SUVs have a 6-speed manual as standard, the Mahindra is the only one to come with a diesel-automatic combination. In addition, the diesel versions of the XUV500 and Compass get optional all-wheel drive, although it is the Compass that is the most capable off-roader, with its four-mode terrain response system.

MG Motor India will announce Hector prices in June 2019, though based on our estimates the Hector is expected to carry a base price tag of Rs 15 lakh, with the top-spec version going for about Rs 20 lakh. This means that the Tata Harrier and XUV500 diesel will undercut the Hector on price – which, in turn, will mean that the Hector will directly go up against the Jeep Compass. A comparison of its features, dimensions, a proper road test and an on-road comparison will be necessary before coming to a verdict; but based on the engines, gearboxes and expected price point of the SUV, the MG Hector seems like a very viable alternative to its competition.