Ahead of its official reveal on May 15, leaked documents confirm four trim levels for the MG Hector; 1.5-litre petrol and 2.0-litre diesel engines to be on offer. 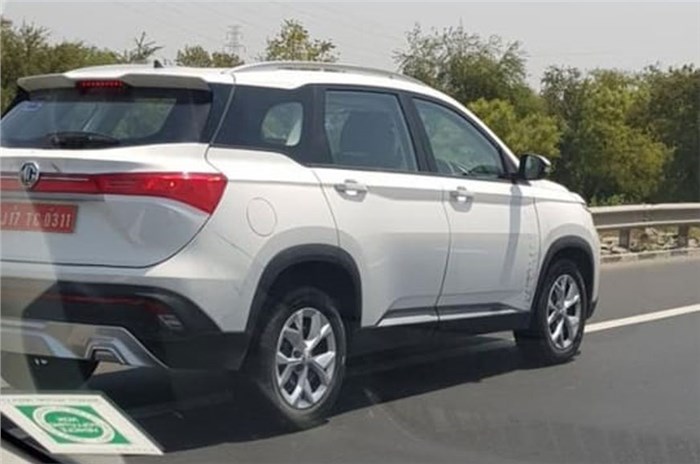 With less than a day to go for the official reveal, leaked documents confirm the MG Hector's specifications, engine and gearbox options, and also that there will be 13 versions on offer. MG is aiming to give the Hector a wide price bracket, and so, will offer it in four trim levels – Style, Super, Smart and Sharp.

The entry point to MG Hector ownership will be the Style variant, which misses out on a number of features, including the portrait-oriented 10.4-inch touchscreen infotainment system. It’s also likely the Hector will get steel wheels and wheel covers, except for the Smart and Sharp models, which will come with 17-inch alloy wheels. That said, the light-on-features Style variant will mean MG can price the Hector aggressively. Sitting a notch above the Style variant will be the Super, which gets the large touchscreen unit with Apple CarPlay and Android Auto, cruise control, LED tail-lamps, a reverse camera and more. Above that is the Smart variant, which will get MG's much-hyped iSmart connectivity suite, power-adjustable and foldable outside mirrors, a six-way power adjustable driver's seat push-button start with keyless entry and faux leather upholstery.

As for the range-topping MG Hector Sharp’s features, the list includes a 360-degree camera, a four-way power adjustable co-driver’s seat, a massive panoramic sunroof, heated outside mirrors, rain-sensing wipers, automatic headlights and mood lighting with eight colour options. As has been revealed already, the Hector’s iSmart connectivity feature suite – accessed via the 10.4-inch touchscreen infotainment system and available only on the Smart and Sharp trim levels – will include AI-powered Voice Assist, pre-loaded apps and the ability to receive over-the-air updates.

In terms of safety features, the MG Hector gets two airbags, ABS with EBD, ESP, traction control, rear parking sensors and disc brakes on all four wheels as standard, the Smart variant gets four airbags, while the Sharp gets six.

The MG Hector’s engine options are now confirmed to include a 1.5-litre turbo-petrol producing 143hp and 250Nm of torque, and a 2.0-litre, FCA-sourced diesel unit making 170hp and 350Nm of torque. While a 6-speed manual will be available with both engines, the turbo-petrol also gets the option of a 6-speed dual-clutch automatic gearbox. Also part of the range will be a 48-volt mild-hybrid petrol variant that is said to be 12 percent more fuel efficient than the petrol-only variant, and the mild-hybrid system will also provide up to 20Nm of additional torque at low speeds to help counter turbo lag and allow improved acceleration in stop-start city traffic. The MG Hector's fuel efficiency is rated at 13.96kpl for the petrol and dual-clutch auto version, 14.16kpl for the petrol-manual and 17.41kpl for the diesel version.

It is now officially confirmed that MG will launch the Hector by June 2019, and when it does go on sale, the Hector’s price is expected to be in the Rs 15-20 lakh range (ex-showroom), which will see it take on the Tata Harrier and Jeep Compass. MG will have 50 dealers – with up to 120 touchpoints – across India by the time the Hector goes on sale.