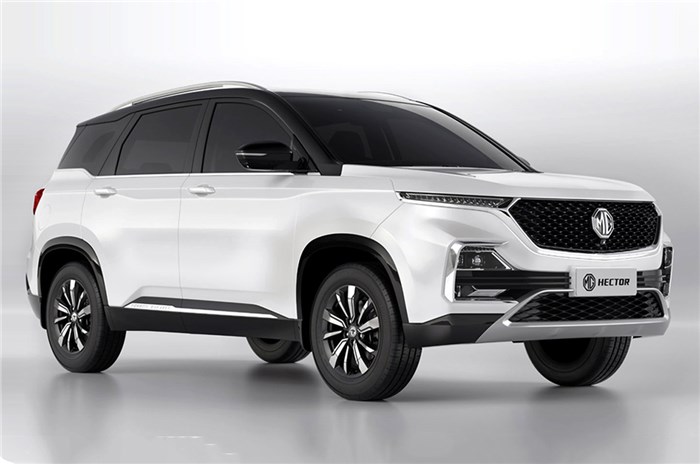 The MG Hector dual tone – Hector Dual Delight as it’s officially named – has been launched, with prices starting from Rs 16.84 lakh (ex-showroom). As we previously reported, the dual-tone colour options are available solely with the fully-loaded Hector Sharp.

What are the changes the Hector dual tone?

Simply put, it’s just the contrast-coloured roof and wing mirrors that sets the dual tone apart from the standard MG Hector Sharp. The Dual Delight model gets a blacked out roof, A-pillar and wing mirrors and that’s about the extent of changes.

As with the regular Hector Sharp, you get the stylised diamond cut alloy wheels and plenty of chrome accents across the exterior. Inside too, there are no changes to the cabin.

Being based on the Hector Sharp, there is a long list of equipment, including a 10.4-inch touchscreen with MG’s i-Smart connected car tech, LED headlights, auto headlamps and wipers, powered front seats (hybrid only gets a powered driver seat), six airbags, ESC, traction control and more.

However, keep in mind that the dual tone option is only available with two colours – Glaze Red and Candy White.

What are the engine options?

How much extra do you pay?

The dual tone paint option will set you back by Rs 20,000 over the standard Hector Sharp. The petrol-hybrid is priced at Rs 16.84 lakh while the petrol DCT and diesel are priced at Rs 17.76 lakh and Rs 18.09 lakh, respectively.

What are its rivals?

The MG Hector sits in the popular mid-size SUV segment and rivals the popular Hyundai Creta and Kia Seltos, Nissan Kicks and the Tata Harrier, all of which are available with dual-tone exterior finishes.

What is to come for MG?

So far in 2020, MG has launched two new products in the market, including the all-electric ZS EV and the Hector’s 7-seat sibling, the Hector Plus. Another launch lined up for the year is the premium full-size seven-seat SUV, the Gloster.

Come to 2021, MG is expected to launch the standard petrol ZS SUV in India, with a Maruti Ertiga rival and a larger MPV to rival the Kia Carnival also on the cards.

All prices, ex-showroom, India, except Kerala