The Sonet manages to post higher mileage figures than its sibling, the Hyundai Venue. 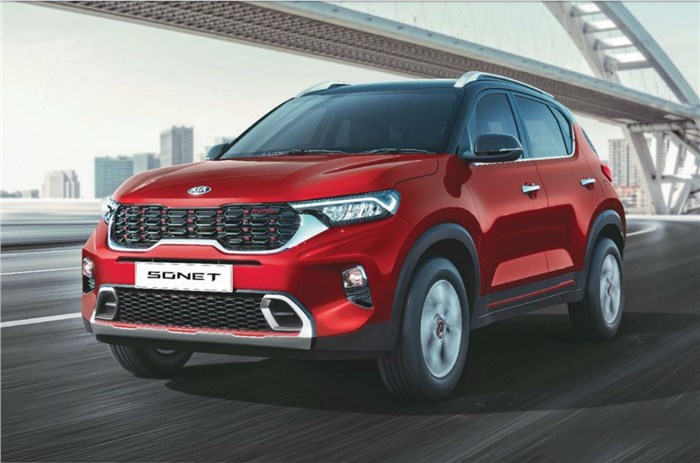 The Kia Sonet made its debut in production form earlier this month. While the price announcement of the sub-four-metre SUV has been lined up for next month, we’ve already reported on the Sonet’s powertrain details as well as the features you can expect from each variant. And now, we’ve got our hands on the official mileage figures of the upcoming Kia.

Read on to know how frugal the Sonet is and how it compares to the competition.

The Sonet gets three engines and as many as five gearbox options to choose from. The entry-level 83hp, 1.2-litre naturally aspirated petrol engine, solely mated to a 5-speed manual transmission, has an ARAI-rated fuel economy of 18.4kpl. The 120hp, 1.0-litre turbo-petrol unit offers the choice between a 6-speed iMT (intelligent manual transmission) and a 7-speed DCT automatic. The former, essentially a clutchless manual setup, is rated at 18.2kpl, while the latter has a claimed mileage of 18.3kpl.

There is also a 1.5-litre diesel mill on offer, in two states of tune. The engine puts out 100hp when allied to a 6-speed manual and returns a fuel efficiency figure of 24.1kpl. For the 6-speed torque-converter auto gearbox, Kia has provided the diesel with a variable geometry turbocharger that bumps up the power output to 115hp (the same as the Kia Seltos and Hyundai Creta), but sees a drop in fuel efficiency to 19kpl.

Kia has calibrated the Sonet to return a better mileage than the Hyundai Venue with which it shares its running gear. Kia’s 1.2 petrol is 1.1kpl more efficient than its Hyundai counterpart, while the 1.0 turbo-petrol DCT setup also performs better by 0.3kpl in the Sonet compared to the Venue.

Stacked up against rivals, the Sonet comes out on top as the most efficient petrol-manual SUV, and narrowly concedes the top spot in the petrol-auto segment to the Maruti Suzuki Vitara Brezza automatic which, at 18.76kpl, is the most fuel efficient compact SUV in the petrol category, thanks to its mild-hybrid tech.

Coming to diesels, the Sonet manual not only manages to outshine its Hyundai sibling by 0.8kpl, but also takes the title of the most efficient sub-four-metre SUV. However, owing to a torque-converter transmission and higher power output, the Sonet diesel-auto is down on the Nexon AMT by as much as 3.4kpl.

In addition to the kit we’ve come to expect from a car of this segment, the Sonet is set to arrive with first-in-class features like a 10.25-inch touchscreen, Bose sound system and front ventilated seats. With class-leading equipment and a segment-first diesel-torque converter automatic setup, the Kia Sonet will be priced on the higher side of the compact SUV category. Expect prices to be in the Rs 7-13 lakh range (estimated, ex-showroom) when Kia’s third model for India launches next month.