How does the just-launched Kia Seltos compare to the in-demand MG Hector in terms of variant line-up, features and price? We break it down for you. 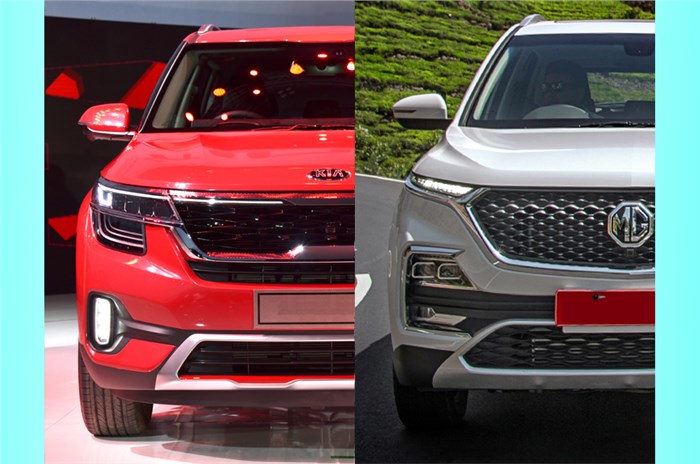 Marking the debut of their respective brands, the MG Hector and Kia Seltos have arrived with a bang. The latter has just been launched, with prices ranging from Rs 9.69 lakh to Rs 15.99 lakh, and while it has amassed over 32,000 bookings already, the Seltos has another thing going for it – MG has temporarily closed bookings for the Hector, which means plenty of midsize SUV buyers will now be keen to know if they can pick up a Seltos instead. Hence, we decided to compare the equivalent variants of the Hector and Seltos to see how they stack up in terms of features and price. Before we jump into it, it's important to highlight the fact that not only is the Hector a size larger than the Seltos, but also has a considerably more powerful diesel engine – the differences were pointed out in when we lined-up the Kia Seltos alongside its rivals, on paper.

At Rs 12.18 lakh, the base Style variant of the Hector petrol costs Rs 2.48 lakh more than the base HTE variant of the Kia Seltos petrol, while the Seltos HTE diesel undercuts the Hector Style diesel by a massive Rs 3.19 lakh. In terms of equipment, base variants of both SUVs offer a decent amount of kit –as standard, they come with a four-speaker audio system, two airbags, ABS, rear parking sensors, and the Seltos even comes with projector headlights, rear AC vents and steering-mounted audio controls. ABS, ESP and traction control are available with both SUVs, but the Hector also packs in disc brakes for all-four wheels as standard, while the Seltos HTE petrol gets drum brakes at the rear (Seltos HTE diesel gets disc brakes on all-four wheels).

Sitting above the Style, is the Hector Super variant (Rs 12.98-14.18 lakh). It packs in a massive 10.4-inch portrait-oriented touchscreen infotainment system with Android Auto and Apple CarPlay, reverse camera, front parking sensors, LED head- and tail-lights, alloy wheels, cruise control and steering-mounted audio controls. What’s more, the petrol Super costs only Rs 80,000 more than the Style (Rs 1 lakh more in the case of the diesel Super). The equivalent Seltos variant is the HTK (Rs 9.99-11.19 lakh), which brings an 8.0-inch touchscreen infotainment system with Apple CarPlay and Android Auto, reverse camera, projector fog lamps, a six-speaker Arkamys sound system and electrically-adjustable ORVMs. All this, for a mere Rs 30,000 more than the HTE petrol! That said, the difference between the diesel HTK and HTE is a more significant Rs 1.2 lakh. Also available is a HTK+, which, for Rs 1-1.2 lakh, adds 16-inch alloy wheels, cruise control, rear wiper/washer and defogger, smart key with push button start and auto-folding wing mirrors.

Next up in the Hector range is the Smart variant (Rs 14.68-15.48 lakh), which gets you most of the goodies, including four airbags, a tyre pressure monitor, iSmart connected car tech powered by an Airtel e-SIM, leather seats, six-way power-adjustable driver’s seat, push-start button, power-folding ORVMs and an eight-speaker Infinity audio system. To counter this, Kia has the HTX variant (Rs 12.79-13.79 lakh), which gets LED headlights and DRLs, auto climate control, telescopic adjust for the steering wheel, 17-inch alloys, 10.25-inch touchscreen infotainment system with UVO Connect, an air purifier, black-and-beige leather upholstery and a tyre pressure monitor.

Kia has a sportier version of the Seltos in the form of the GT Line, which is only available with the 1.4-litre turbo-petrol engine for the time being (the differences between the Seltos Tech Line and GT Line were elaborated on here). This range starts with the GTK at Rs 13.49 lakh, which is significantly lower than the Hector Smart Hybrid’s Rs 14.68 lakh price tag. It gets telescopic steering wheel adjustment, 17-inch alloy wheels, sporty alloy pedals, reverse camera, auto climate control, black leather seats with red stitching, cruise control and an Arkamys sound system, to name a few. There’s also the GTX (Rs 14.99-15.99 lakh), which gets six airbags, an 8.0-inch head-up display, 10.25-inch touchscreen infotainment system with UVO Connect and an air purifier. The range-topper is the GTX+ MT (Rs 15.99 lakh), which packs in an electric sunroof, eight-speaker Bose audio system, a 360-degree surround view camera and a blind spot monitor. In comparison, the Hector petrol-automatic is only available in Smart (Rs 15.28 lakh) and Sharp (Rs 16.78 lakh) variants.

At Rs 15.88 lakh, the Hector Sharp Hybrid actually costs Rs 11,000 less than the Seltos GTX+ MT, but at Rs 16.88 lakh, the Hector Sharp diesel costs Rs 89,000 more than the Kia Seltos HTX+ diesel MT, which is priced at Rs 15.99 lakh. What the Hector Sharp brings to the table is automatic climate control, a massive dual-pane panoramic sunroof (the largest in the segment) with remote open-close function, six airbags (the Seltos HTX+ diesel gets just two airbags), 360-degree surround view camera, heated ORVMs, a four-way power-adjustable co-driver’s seat and powered tailgate. The Seltos HTX+ also features an eight-speaker Bose audio system and an eight-way power-adjustable driver’s seat, and one-ups the Hector Sharp with ventilated front seats and wireless smartphone charging, but doesn’t get as many airbags. Kia is set to introduce a fully-loaded GTX+ variant for the 1.4 petrol-DCT and diesel-auto combinations a month later, which will get six airbags, an 8.0-inch head-up display, a 360-degree surround view camera, blind spot monitor and drive modes and traction control, but these top-spec variants are likely to be priced precariously close to the Hector Sharp.

Both Kia and MG had to make a statement with their first products, and both have managed to do just that with some truly aggressive pricing. The MG Hector's introductory price ranges from Rs 12.18-16.88 lakh, which places it in the heart of the midsize SUV market, while the Kia Seltos’ price range stretches from Rs 9.69-15.99 lakh (all prices are ex-showroom, pan-India). It must be noted here that the MG will be due for a price increase in the coming months, once its engines are upgraded to BS6 spec. The Seltos – which is already BS6-compliant – should not see a dramatic price increment.

What do you think about the prices of the MG Hector and Kia Seltos – and which one seems more appealing to you and why? Let us know in the comments.