The Kia Seltos is feature-rich and is priced competitively. We pit it against its rival SUVs to see how it compares. 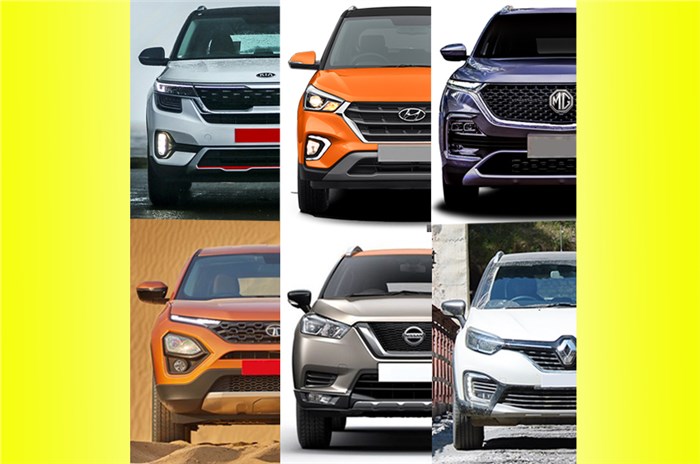 After much anticipation, Kia Motors has finally launched its first product in India, the Seltos, at Rs 9.69 lakh. The SUV can be had in 16 different versions with six engine-gearbox combinations to choose from. Despite the varied configurations and aggressive pricing, the Seltos has its work cut out, seeing as it will compete in the midsize SUV segment against rivals like the Hyundai Creta, Nissan Kicks and Renault Captur, and it’ll also find competition in the form of the new MG Hector and Tata Harrier in terms of prices. Let’s see how the Seltos compares against these rivals.

You can club the SUVs in consideration in two groups, with the Seltos, Creta, Kicks and Captur on one side, and the significantly larger Hector and Harrier on the other. Of the former group, the Seltos is a bit longer and wider than the Creta, and the Kia has the largest boot too; though the Kicks and Captur are marginally larger in length, width and wheelbase. Interestingly, the Nissan and Renault SUVs also have the most ground clearance of all models here. Still, a single look will tell you that the Hector and Harrier are the larger ones. The Harrier is the widest SUV in this group but the Hector is longest, tallest, has the largest wheelbase and also the biggest boot.

Before we get into the finer points of this section of the comparison, it’s important to note that the Seltos’ engines will be BS6 emission norms-compliant at launch. Rival SUV engines will be upgraded to BS6-spec in the months to come and there is the possibility of change in power and torque figures too.

Starting with the diesels, all SUVs here feature four-cylinder, turbo-charged engines, though the Creta is the only one to offer the choice of two units – a 90hp, 1.4-litre and a 128hp, 1.6-litre one. The Seltos’ 115hp/250Nm, 1.5 unit slots in between the two Creta diesel engines but has a mild power and torque advantage over the Kicks’ and Captur’s shared 1.5 unit that makes 110hp and 240Nm of torque. The Harrier and Hector also share their Fiat-sourced engine, a 2.0 diesel unit, though the Tata and MG use the engine in different states of tune. Where the engine makes 140hp and 350Nm on the Harrier, it makes 170hp (but the same 350Nm) on the Hector, giving the MG bragging rights in terms of power.

Six-speed manual gearboxes are standard across the board, though the Seltos and Creta 1.6 also offer the convenience of a 6-speed torque converter automatic transmission with the diesel engines.

As for the petrol engines, the Seltos gets two options – a 115hp, 1.5-litre naturally-aspirated unit and a sportier 140hp, 1.4-litre turbocharged mill. The standard 1.5 engine goes one up on the Kicks’ and Captur’s shared 1.5 engine’s 106hp, though the Kia’s figures are still some way off those of the Creta 1.6 petrol unit’s 123hp. Buyers looking for more performance do have the option of the turbo-petrol version though. The 1.4-turbo-petrol’s 140hp and 242Nm are just shy of the stock Hector 1.5 unit’s 143hp and 250Nm figures. However, the 48V mild hybrid version of the MG engine provides 20Nm of additional torque at low-speeds. Still, it’s the Kia 1.4 that should be quickest given its estimated lighter kerb weight.

Both petrol engine versions of the Seltos get 6-speed manual gearbox as standard. The 1.5 is additionally available with a CVT auto and the 1.4 also has the option of a 7-speed dual-clutch auto. The standard Hector petrol also gets the choice of 6-speed manual and a 6-speed dual-clutch auto, though the hybrid version only gets a manual transmission. Hyundai Creta petrol buyers also have the choice of 6-speed manual and torque converter auto gearboxes. Nissan and Renault don’t offer automatic gearboxes with petrol versions of their SUVs while Tata doesn’t build a petrol Harrier altogether.

As was the case with the diesel engines, the Seltos is also the most fuel-efficient petrol in this comparison, regardless of the transmission option.

Kia has priced the Seltos from Rs 9.69 to 15.99 lakh for the petrol variants and from Rs 9.99 to Rs 15.99 lakh for the diesels. The aggressive pricing sees the base petrol Seltos undercut the Creta and Hector petrol variants, while being marginally more expensive than the Kicks and Captur. However in terms of the diesels, the base Seltos manages to undercut all its rivals, while being priced on par with the Creta. The top-spec versions of the diesel Kia still undercut the Hector and Harrier, though are pricier than similarly sized rivals. With a wide variety of configurations, the features on offer and its attractive pricing, Kia seems to have a winner on their hands. However, only a road test and a comparison with its rivals will confirm this.