Sporty GTX+ diesel-automatic variant of the Kia Seltos will feature six airbags, a head-up display, a 360-degree camera and more; likely to be the priciest variant in its line-up. 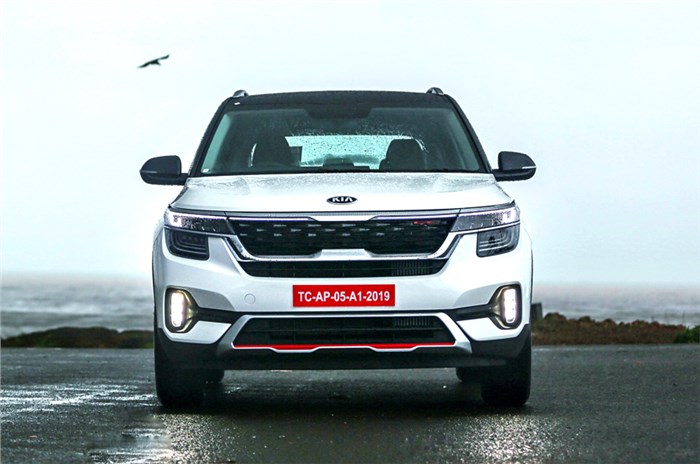 We’re now less than a week away from the Kia Seltos’ India launch, which is scheduled for August 22, 2019. The variant line-up for the model, which has surfaced online in bits and pieces, is also now more or less in place. Not only has Kia decided to offer fully-loaded versions of the Seltos petrol and diesel automatics, but now we can confirm that the company will also offer the diesel-automatic version in a sportier GT Line form. Previously said to be available only with the 1.4-litre turbo-petrol engine, the GT Line range will also include the option of a fully-loaded GTX+ 1.5 diesel-automatic, and dealers have now started accepting bookings for this variant.

The Seltos will be available in two variant lines – Tech Line and GT Line. As the GT Line is designed to be the sportier of the two, it adds red accents in the skid plates and door sills, red brake calipers, a different design for the 17-inch alloy wheels and GT Line badges on the grille and boot lid. On the inside, the GT Line models sport an all-black interior with contrast red stitching, as opposed to the black-and-beige combo seen on the Tech Line models. Another sporty touch on the inside of the GT Line models is the addition of alloy pedals. That said, differences between the two aren’t restricted to just cosmetic changes.

Features-wise, the GT Line models get six airbags, electronic stability control, hill-hold control, a 360-degree camera, rain-sensing wipers, and the segment-first 8.0-inch head-up display. It must be noted that the Tech Line models get none of those features. To give you a quick recap, the Kia Seltos’ 1.5-litre diesel engine puts out 115hp and 250Nm of torque, and is mated to a 6-speed torque convertor automatic gearbox.

It’s worth mentioning that prices for the range-topping X+ automatic variants of the Kia Seltos petrol and diesel are likely to be announced a month after the launch. It’s a decision that’ll help make the Seltos' price range look attractive at the time of launch – a strategy often followed by carmakers.