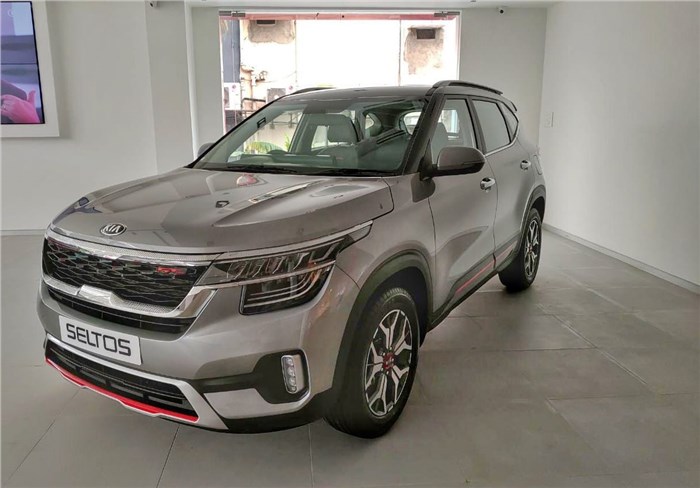 Kia Motors India has silently introduced two new top-spec variants for the Seltos after gathering customer feedback. These include a new GTX+ petrol variant that will come with a 1.4-litre engine mated to a 7-speed DCT and a new GTX+ 1.5-litre diesel variant mated to a six-speed torque convertor automatic, this means, buyers will now be able to purchase a Seltos GT-line with a diesel engine but only with an automatic gearbox. Both models are priced at Rs 16.99 lakh ex-showroom, pan-India.

At Rs 16.99 lakh, the newly introduced GTX+ petrol DCT and diesel AT variants command Rs 1 lakh premium over the erstwhile top-spec GTX petrol DCT and HTX+ AT with both variants priced at Rs 15.99 lakh (ex-showroom).

Dealer sources at Kia had confirmed to us a few days ahead of the SUVs official launch that the company is readying two new top-spec variants of the SUV.

The Seltos’ India line-up is split in two major trim lines with the HT-line being the more conventional range and the GT-line being the sportier of the two that comes with bits like red accents on the exterior, unique design for alloy wheels and all-black interior with contrast red stitching to name a few.

The GTX+ variants of the Seltos come with a standard sunroof, ventilated front seats, Bose sound system, a 360-degree camera, front parking sensors and leatherette seats. The GT-line range also gets six airbags, rain sensing wipers and a 8.0-inch head-up display as standard. These features are not available on the Seltos Tech line trim.

At launch, Kia Motors announced pricing for no less than sixteen variants of the Seltos SUV which are spread cross the above mentioned engine-gearbox combinations. While these may sound a lot, the Seltos’ top-spec GTX+ variant still missed out on an automatic gearbox option and was available only with a single 1.4-litre turbo-petrol mated to a six-speed manual gearbox at launch.

Bookings for the GTX+ petrol auto and diesel auto have begun with deliveries are expected to commence sometime early next month.