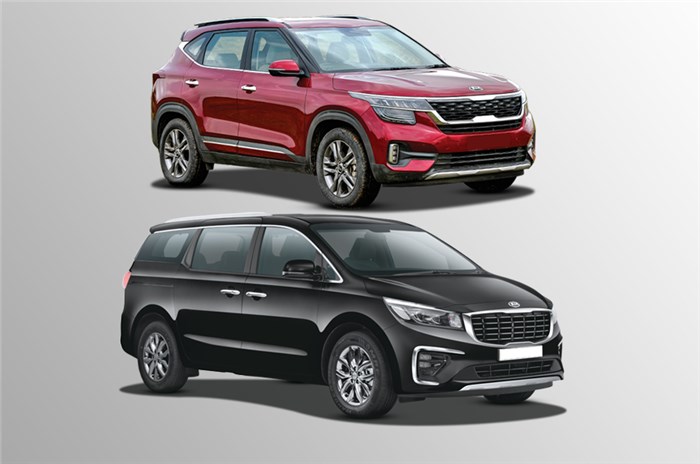 Despite the overall muted consumer and industry sentiment, Kia Motors India seems to be showing no signs of slowing down in the marketplace.If it sold 500 cars a day in January 2020, then it has bettered that score in February with 15,644 units – that is 14,024 Seltos SUVs and 1,620 Carnival MPVs. With this astounding performance, the Korean carmaker and sibling of Hyundai Motors India has crossed the 75,000-unit milestone in a scant 7 months (see sales stat details below).

Commenting on the record sales registered by the company,Kookhyun Shim, managing director and CEO, Kia Motors Indiasaid,“I am extremely delighted with the response and acceptance Indian customers have given us. Our latest offering – the Carnival – has been received well and this has helped to add to our sales numbers. This not only testifies the quality, reliability and design prowess of our vehicles, but also gives a hint that India is evolving, and Indian customers now don’t just settle but opt for better product offerings. It’s a proud moment for all of us at Kia Motors India who have worked diligently to achieve this feat. With the upcoming new compact SUV, the Sonet's launch slated for the second half of the year, I am confident that we will continue to carry this momentum throughout this year.

Kia Motors’ India’s continued strong performance and the surging demand for its Seltos has seen the carmaker snatch a 7.43 percent UV market share in barely six months. Now it has upped the ante bylaunching the luxurious Carnival MPV in India with prices starting from Rs 24.95 lakhand topping off at Rs 33.95 lakh.Available with a sole diesel-automatic powertrain, the MPV can be had in three seating configurations and three trims – the entry-level Premium variant is available as a 7- and 8-seater, the mid-spec Prestige as a 7- or 9-seater, and the range-topping Limousine variant gets a 7-seat layout with plush ‘VIP’ second-row seats. February’s strong sales of 1,620 units indicate demand is in place. Should the MPV sustain the initial momentum, Kia’s second model for India could be its second hit in a row.

And there’s the good-looking Sonet SUV coming up too. At last month’s Auto Expo 2020, Kia Motors India took the covers off thebold new Sonet compact SUV.The concept previews a production-spec, sub-four-metre SUV (codename: QYi) that will join Kia’s line-up around August 2020.The Kia Sonet, which will only be produced in India (which means the company will be targeting sizeable exports to Kia global markets), shares its underpinnings with its distant cousin from Hyundai, the Venue.

When launched in the second half of 2020, the production-spec Sonetcompact SUV is expected to carry a sticker price of Rs 7 lakh-11.5 lakh (ex-showroom). Aside from the Hyundai Venue, the Kia Sonetwill also have to see off a whole lot of rivals including the Maruti Vitara Brezza, Tata Nexon, Ford EcoSport and Mahindra XUV300.Kia has gone on to dominate the midsize SUV segment with the Seltos, and will be hoping to repeat the success in the compact SUV segment. Given the Auto Expo visitors' initial response to the Sonet, the first signs sure are positive.

Wait, there's more. Kia is also seriously evaluating the MPV market in India, which has seen a resurgence recently with the second-generation Maruti Ertiga. Maruti's exit from the diesel segment means there will be a sizeable vacuum in the diesel MPV market.The Kia midsize MPV is still on the drawing boardand hasn’t been fully green-lighted yet, and the earliest it can come to the market is by end-2021. It’s likely that the all-new MPV will be exported to other countries as well.

KiaSeltos: Which variant to buy?