Hyundai has achieved the milestone since the launch of the first-gen Creta five years ago. 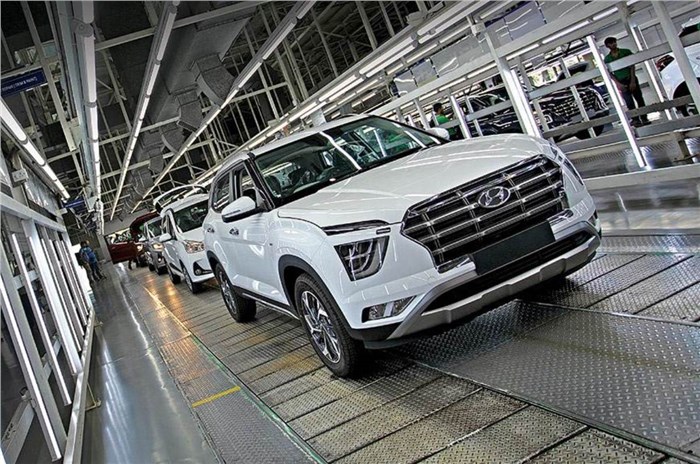 The made-in-India Hyundai Creta has surpassed the 2,00,000 unit export milestone since manufacturing of the first-gen model began in 2015.The second-generation of the popular mid-size SUV is also seeing strong demand and is currently the bestselling utility vehicle in India.

As per our sister publication Autocar Professional’s data analytics, the Creta’s best annual export performance came in FY2018 when a total of 50,820 units were despatched from Chennai Port. The year-wise trend of the mid-size SUV’s exports is as follows:

With an export share of 26 percent (CY2019) in passenger car exports from India, Hyundai remains a significant contributor to the Indian automobile industry and the government’s Make in India initiative.

Launched in March 2020, the new Creta comes with three engine options – a 1.5-litre petrol, a 1.4-litre turbo-petrol and a 1.5-litre diesel mill – each available with a different choice of automatic transmission. After a recent rejig of the variant line-up, Hyundai Creta prices now start at Rs 9.82 lakh and top off at Rs 17.32 lakh (all prices, ex-showroom, India).

Hyundai regains No. 1 PV exporter crown from Ford in FY2020

In FY2020, the Verna sedan led the export charge for Hyundai, with total shipments of 60,065 units and accounting for 35 percent of the company's overall exports in FY2020. The growing demand for the made-in-India Verna saw the sedan notch 49.12 percent year-on-year (YoY) growth and stand out as the company's most exported car last fiscal, and India's second-best export model (after the Ford EcoSport). It is understood that the Verna is seeing robust demand from Middle East markets, especially Saudi Arabia.

The other Hyundai export models that saw growth were the Creta-Venue SUV combine, which with 47,601 units, saw YoY growth of 27.58 percent (FY2019: 37,308). Both SUVs have received a strong market response in Chile, Peru, Mexico, Tunisia and South Africa.

Earlier this year, Hyundai Motor India rolled out its three-millionth Made-in-India export car from its Sriperumbudur plant near Chennai, 20 years after it first started export operations. In CY2019, it exported 1,81,200 units with 792 customised variants according to country specific preference and demand.