The new Creta and Venue have helped Hyundai edge past the traditional SUV leader Mahindra in the April-August 2020 period. 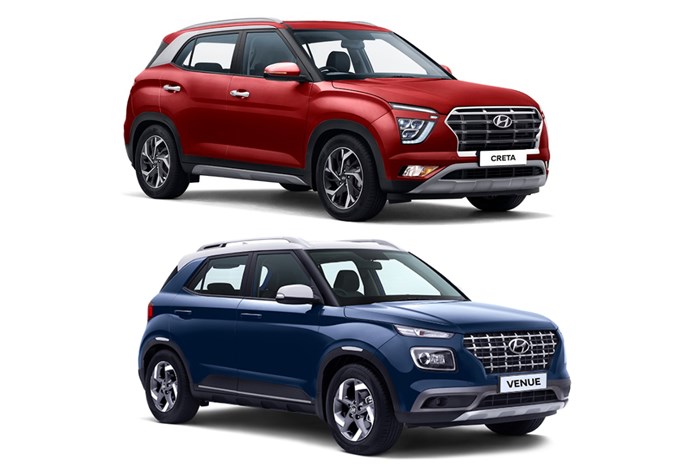 The Indian auto industry is arguably witnessing its toughest phase in recent times, with the coronavirus-induced economic crisis crippling demand. While Hyundai’s sales have also been badly hit like the rest of its competitors, the Korean automaker has managed to expand its market share in the SUV segment and gain the leadership position. The carmaker posted sales of 54,402 units in the SUV segment in FY2021 (till August), on the back of (relatively) strong demand for the Creta and Venue.

Let’s take a closer look at how both the models have helped Hyundai gain the upper hand in the SUV space.

The new Hyundai Creta was launched on March 16, 2020, just a week prior to the nationwide lockdown. After the Indian auto industry witnessed a month of zero sales in April, the Creta became the country's bestselling SUV the month after and it has managed to hold on to the title till now, with the latest industry figures for August 2020 putting it at the top of the SUV sales chart yet again.

In the April-August 2020 period, the Creta saw dispatches of 33,726 units – 6,076 units higher than its sibling, and closest competitor, the Kia Seltos. Moreover, the second-gen SUV’s sales have been consistently rising since May 2020 (3,212 units), with August registering the highest sales of 11,758 units. New products are known to witness a buoyed demand in the initial phase and the true test lies in the Creta being able to continue the momentum in the coming months.

Nonetheless, the success of the 2020 Creta also shows the ability of new models to excite the market and revive demand, even during troubled times like these. Many automakers are hoping to mirror the strategy by lining up their launches for the coming months.

The Hyundai Venue has also proven to be a consistent performer for the Korean automaker. The sub-four-metre model registered sales of 20,372 units in the April-August 2020 period, just about enough to top the compact SUV sales chart and edge past the Maruti Suzuki Vitara Brezza, which sold 19,824 units.

Hyundai has been quick on the draw with introducing minor updates to the Venue, in an effort to maintain its lead. In addition to upgrading the model to BS6 norms earlier this year, the car major has added a new ‘Sport’ trim and a clutchless manual gearbox, or intelligent manual transmission (iMT) in Hyundai speak, to the line-up.

Hyundai took the lead in the SUV segment in the April-August 2020 period by registering combined sales of 54,402 units for the Creta, Venue, Tucson and Kona Electric, while Mahindra came in second with sales of 34,914 SUVs. The positions are reversed compared to the same period last year when the Korean automaker was trailing behind the segment leader Mahindra, albeit by just 654 units.

The sale of 54,402 SUVs in April-August this year has given Hyundai a market share of 30.03 percent in the SUV segment, an increase of 2.20 percent vis-à-vis the same period last year. Together with its sister company Kia, the Korean counterparts accounted for a substantial 45.29 percent, or almost half, of the SUVs sold in our market in FY2021 (till August).

Leveraging the rapidly increasing consumer interest in the compact and mid-size SUV segments, Hyundai has extended its advantage in the SUV space. However, with the Seltos continuing to put up a good show, and the launch of the highly anticipated Kia Sonet lined up for later this month, Hyundai could soon see that lead diminish. Nonetheless, it is evident that the two Korean automakers have together conquered the Indian SUV segment.