The three millionth Hyundai car for export was the Aura compact sedan; it was produced at the brand’s Chennai plant and will be sold in Columbia as the Grand i10. 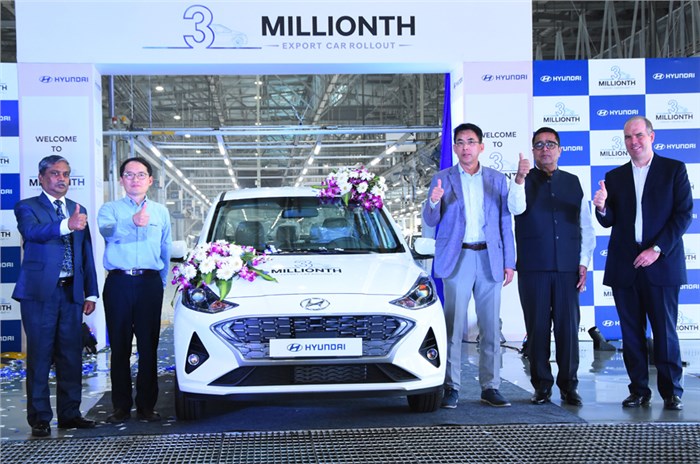 Hyundai India has achieved a significant milestone today with the rollout of its three-millionth made-in-lndia car for export from its Chennai plant. The milestone car is a Hyundai Aura, though it is badged as the Grand i10 as the compact sedan sells under the latter name in the Colombian market.

Commenting on the milestone, S S Kim, managing director and CEO, HMIL, said, “The fastest made-in-lndia three-millionth export rollout is a significant milestone as it showcases the global success story for brand Hyundai. We started our export operations in 1999 and created many milestones. We thank all our global customers and overseas distributors for their trust and support which has helped us reach this landmark. We will continue to offer an all-around premium experience to our customers through our quality products, both in the Indian and global markets.”

Currently, Hyundai Motor India exports 10 models: the Atos (Santro), Grand i10, Xcent, Grand i10 (Nios) and Grand i10 (Aura), Elite i20, i20 Active, Accent (Verna), Venue and Creta. Globally, the Chennai-based carmaker exports made-in-lndia cars to 88 countries across Latin America (33 countries), Africa (28 countries), Asia Pacific (26 countries) and Europe (1 country). In the APAC region, specifically in Saudi Arabia, both the Creta and Accent are the respective leaders of their segments with 40 percent and 33 percent market share, respectively. In Nepal, Hyundai is the leading brand in the overall passenger car market with a market share of 29 percent. In Africa, specifically in Libya, Hyundai says it is the No. 1 brand with 80 percent market share.

Hyundai i30 N Fastback to be showcased at Auto Expo 2020