Headlined by the Creta-rivalling Taigun, VW’s SUV range will expand to four models this year. 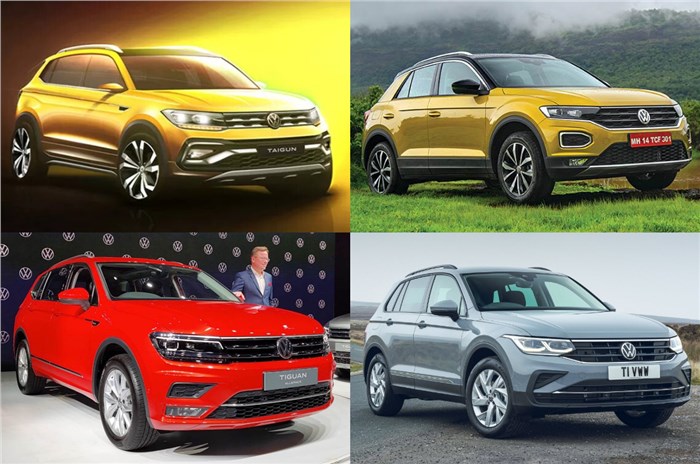 UPDATE: Production-spec Volkswagen Taigun to be revealed on March 31

Volkswagen India is gearing up for a busy 2021, working to sharpen its focus on the SUV segment – an offensive it calls the ‘SUVW’ strategy. The automaker’s efforts will be spearheaded by the soon-to-be unveiled VW Taigun that will take the likes of the Hyundai Creta head on. “2021 is going to be an exciting year for us. We have a lot of product plans – we have our ‘SUVW’ strategy very well in place. So, we will be coming out with four SUVs,” commented Ashish Gupta, brand head, Volkswagen Passenger Cars India, in an interview with Autocar India.

Accepting that the company has been missing a strong portfolio in a rather burgeoning segment until now, he said, “Where we have been lacking a little bit is in giving choices to the customer to upgrade within VW. So ‘SUVW’ is typically a completion of our portfolio and that’s where the market is moving towards as well.” In the April 2020-February 2021 period, the utility vehicle (UV) segment registered an annual growth – the only category of passenger vehicle (PVs) to do so – despite the pandemic.

“The market share of SUVs has been growing exponentially – they form the largest growing segment in the market. So, it makes sense for us to be present in that space, to make sure that we have a wide portfolio available for our SUVs because that seems to be the choice of the customers,” added Gupta. As such, the company’s SUV range will expand this year to include four models – the tailored-for-India Taigun, the T-Roc, the 5-seat Tiguan and the 7-seat Tiguan Allspace.

Volkswagen Taigun to be the company's biggest 2021 launch

VW is slated to take the covers off the production-spec Taigun later this month, after having revealed it in concept form early last year. “It’s going to be the year of the Taigun, which is our big story for this year,” commented Gupta.

The company has high hopes from the midsize SUV, which, priced at an expected Rs 10-18 lakh (ex-showroom), will be positioned in the heart of the market. “The A0 SUV segment, which we are entering with the Taigun, is the fastest growing segment,” mentioned the VW India boss. For reference, Hyundai’s contender for this space – the Creta – is the largest selling SUV in the country. The category also sees participation from the Kia Seltos, Nissan Kicks and the Renault Duster, with VW’s sister brand Skoda to soon enter the mix with the Kushaq. Another upcoming rival is the MG Astor.

As such, VW is touting to bring on its A-game with the Taigun. Following the company’s understated, but elegant, design language, the Taigun will stick to VW’s typical styling cues, however, the model will pack in plenty of chrome up front to suit Indian tastes.

The cabin will sport a smart design as well, with plenty of high-quality materials and a raft of equipment. In terms of powertrains, VW will offer 115hp, 1.0-litre and 150hp, 1.5-litre turbo-petrol-engines, both with their own choice of automatic transmissions.

After having been taken off the shelf with BS6 norms kicking in last year, the larger Tiguan will make a comeback to the VW model range by late 2021, albeit with some revisions. First off, it will be the facelifted model, revealed globally last year, which will make landfall here in India. It will be recognisable by its slimmer grille, sharper LED headlamps and a more aggressive bumper on the outside, with the cabin featuring its fair share of tweaks.

Next, unlike its all-diesel predecessor, the updated Tiguan will only get a turbo-petrol mill this time around, that too the company’s 150hp, 1.5 TSI motor, mated to a 7-speed dual-clutch (DSG in VW parlance) automatic gearbox. It will also miss out on AWD capabilities and come with a front-wheel-drive only setup.

Thirdly, the model is likely to be assembled at Volkswagen’s Chakan plant near Pune. So, expect an aggressive price tag of Rs 26-29 lakh (estimated, ex-showroom).

Introduced to the Indian market last year as full imports, both, the Tiguan Allspace and the T-Roc, are set to continue in the brand’s portfolio. “These products will definitely continue, one way or the other. Looking at the response to the T-Roc and the Allspace, we see a much higher volume potential than what the (2,500 homologation-free) quota allows us,” said Gupta.

Consequently, the company is looking at ways to better leverage the demand in the future. “See, the next step in increasing the volumes in these segments is, of course, looking at CKD options. Or I won’t say CKD, I would rather put it as a ‘parts and component’ strategy. So that is always under evaluation – whether it makes sense to import fully built units, or to have a parts and components strategy,” he added.

The three-row Tiguan Allspace, then, will be sold alongside the 5-seat Tiguan facelift. In addition to the two extra seats, the Allspace will continue to be marked out by its more powerful 190hp, 2.0-litre TSI engine and AWD capabilities. Currently priced at Rs 34.20 lakh (ex-showroom, India), the 7-seater has seen its prices inch up by Rs 1.08 lakh over the course of the year.

Rounding up the company’s SUV range is the T-Roc. With the first batch of 1,000 units quickly spoken for last year, the company has re-introduced the T-Roc in 2021, albeit at Rs 21.35 lakh (ex-showroom, India) – a markup of Rs 1.36 lakh. There are no changes to the equipment list, or to the powertrain which still consists of a 150hp, 1.5 TSI engine powering the front-wheels through a 7-speed DSG automatic transmission.

Notably, with a footprint similar to the upcoming Taigun and a common 1.5-litre engine under the hood, the T-Roc could result in an overlap within the VW portfolio. However, this is something that the company chief isn’t worried about, given the different target audiences for the two products.

While the Taigun will be aimed at the growing crowd of conventional SUV buyers, Gupta believes that the T-Roc, with its more crossover-inspired design, “has a very distinctive positioning globally and in India as well.” He added, “We have seen that the people who have bought the T-Roc in India are true-blooded driving enthusiasts who look at how the car differentiates themselves from the crowd.”

Moreover, the recent hike in T-Roc prices will also help avoid a price overlap between the two products. “I think the price points are very apt for some people – based on their preference, they can decide on the Taigun or T-Roc. So, they are very well positioned, and there are no overlaps in positioning is as far as I see,” he said.