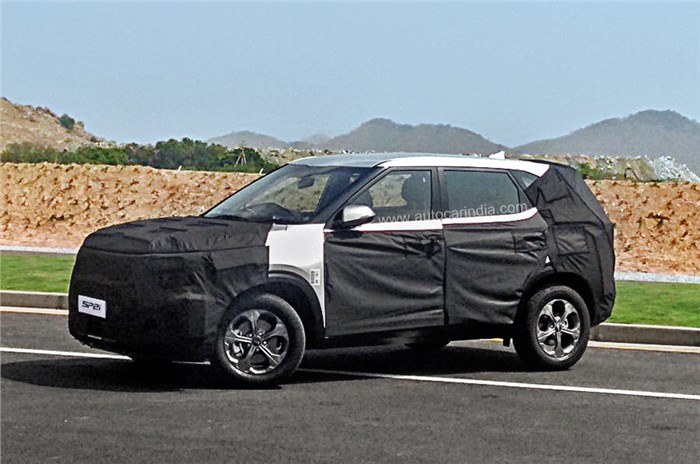 Kia showcased a pre-production test mule to the public while announcing the commencement of trial production at its plant in Andhra Pradesh.

Kia made its India debut last year at the Auto Expo, with one of the models showcased being the SP Concept SUV. The SP Concept previewed Kia’s first production car for the Indian market. While spy images of the camouflaged SUV have appeared online in force, the brand has now officially showcased one of the pre-production models at a recent media event that commemorated its new plant in Andhra Pradesh commencing trial production.

Despite camouflage, the displayed SUV revealed some styling details that the SP2i SUV will sport, such as the dual-headlamp set-up, Kia’s ‘Tiger Nose’ grille design, a prominent shoulder line and glasshouse and a new alloy wheel design.

While the interior has not been revealed, given Kia’s positioning in our market as a premium player, the SUV is expected to be well-appointed and include some segment-first features as well. As per sources, equipment on offer will include a 360-degree camera, heads-up display, ambient lighting, wireless charging and in-car WiFi.

Under the hood, the SP2i is set to feature a pair of 1.5-litre petrol and diesel engines, paired with a choice of manual and automatic gearboxes. Also on the cards is hotter derivative powered by a 140hp 1.4-litre turbo-petrol unit. The engines are expected to be either BS-VI compliant or BS-VI ready. The latter implies that the motors will require changes to make it conform to the stricter emission norms.

As per Kia, the SP2i is expected to be priced in the region of Rs 10-16 lakh (ex-showroom), which should see it rival the likes of the Hyundai Creta, Nissan Kicks, Renault Captur and the Tata Harrier.