Magnite's aggressive pricing is expected to appeal to hatchback buyers, in addition to the compact SUV crowd. 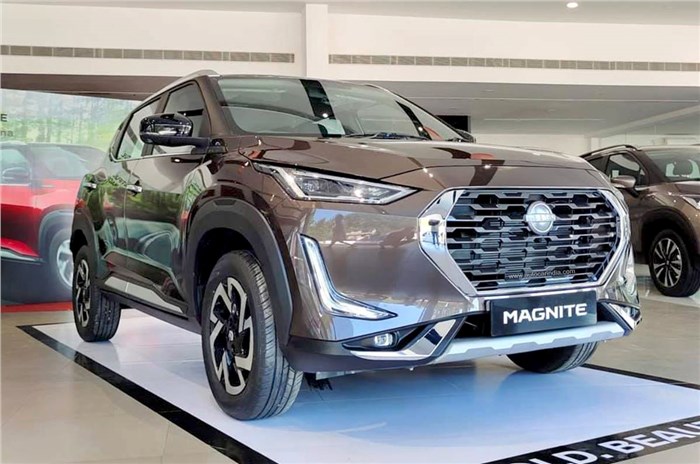 The Nissan Magnite is the latest entrant to the competitive, compact SUV segment. Essentially a make-or-break product for the automaker in our market, the Magnite has been introduced at an aggressive price point of Rs 4.99-9.45 lakh (ex-showroom, Delhi) which undercuts the entire competition.

Calling the competitive positioning a "big, bold and beautiful move by Nissan, giving a breakthrough price that is going to disrupt the entire auto industry", the company's managing director, Rakesh Srivastava, told Autocar India in an exclusive interview that the Magnite is positioned to not only take on the sub-four-metre SUV category, but also products from other segments.

Srivastava mentioned that the carmaker chose a compact SUV for its revival efforts in the country since “SUVs in the Indian market are doing very well, compared to sedans and hatchbacks. In the auto industry, SUVs are the most aspirational. The standing order in aspiration is hatchback, sedan and then it goes up to SUVs.”

He further commented, “I think hatchback and sedan customers also aspire to drive an SUV.” And in order to tap into those aspirations, the car major has essentially closed the price gap between SUVs and hatchbacks/sedans. The company head added that they are “trying to fulfill the dreams of hatchback, sedan and SUV customers”, all at the same time, with the launch of the Magnite.

At a starting price of Rs 4.99 lakh, the entry-level Magnite XE is positioned on par with much-smaller hatchbacks like the Maruti Suzuki Wagon R 1.0 VXI(O) (Rs 4.98 lakh) and the Tata Tiago XE (Rs 4.70 lakh).

Even the base Maruti Suzuki Swift LXI (Rs 5.19 lakh) is Rs 20,000 more expensive, while the most affordable premium hatchback model, the Tata Altroz XE (Rs 5.44 lakh), which has a similar, 4m-long footprint as the Magnite, comes in at a premium. Bringing compact sedans into the picture, the most budget-friendly option, the Tata Tigor XE (Rs 5.39 lakh), is still Rs 40,000 more expensive than the base variant of Nissan’s SUV.

Turning attention to the more performance-oriented models, the Magnite Turbo is priced at Rs 6.99-8.55 lakh for the manual and Rs 7.89-9.45 lakh for the CVT automatic.  In comparison, the Hyundai Grand i10 Nios Turbo in the mid-spec Sportz variant can be had for Rs 7.76 lakh, while the VW Polo TSI comes in at Rs 8.09-9.67 lakh*.

At these price points then, especially with the promise of better space, comfort and features, the Magnite does come off as an incredible value-for-money alternative for many hatchbacks and compact sedans in our market.

How Nissan managed to price the Magnite aggressively

The Magnite is built off the company’s cost-effective CMF-A+ platform which, along with rigorous localisation efforts, has helped keep prices in check. “This is on a very high level of localisation because we believe that it has to be a ‘Made-in-India’ product,” elaborated Srivastava. Also, the Magnite was originally to be badged a Datsun and was built to a cost, which is quite evident.

Providing the right mix of sought-after features has also allowed Nissan to price the top-end versions competitively. For instance, while the Magnite gets a 360-degree parking camera, 8.0-inch touchscreen and a 7.0-inch digital instrument display, it misses out on some equipment that rivals offer, including a sunroof, ventilated seats and side and curtain airbags.

Entering into a space where almost every carmaker is vying for a piece of the pie, Nissan had to adopt a disruptive strategy to have a reasonable shot at grabbing market share. Moreover, with the Datsun Go placed lower down in its India line-up, and the Micra gone, the company didn’t even run the risk of cannibalising its own sales with a low pricing.

Touting the Magnite’s price to be unbeatable value, Srivastava commented, “Can anyone in the auto industry think of challenging this price point?”

At launch, Nissan had revealed that the prices announced were introductory and valid till the end of the year. Speaking to Autocar India, the company’s MD said, “You know what the beauty of it is? I have not set how many units till December 31, 2020 (this pricing is valid for).” Unlike some other carmakers, Nissan isn’t aiming for a sales target and will offer the reduced pricing to all customers who book the car this year. “And the best thing is that we’ll be able to give them 2021 (model year) cars,” he added.

Despite prices for the base Magnite XE slated to go up to Rs 5.54 lakh in 2021 and the rest of the range set to get a commensurate markup, expect the company to maintain its price advantage.

Nissan might have been late to the compact SUV party, but it has arrived with all guns blazing. The Magnite offers a variety of powertrains and packs in the necessary kit, all at a killer price tag. It is clear then that the automaker’s latest product is poised to upset the established order, if only it can manage to restore faith in the company’s sales and service network.