Unveiled at the 2019 Seoul motor show, the Signature concept previews the near-production-spec Kia SP2i SUV, which is set to be launched in India later in 2019. 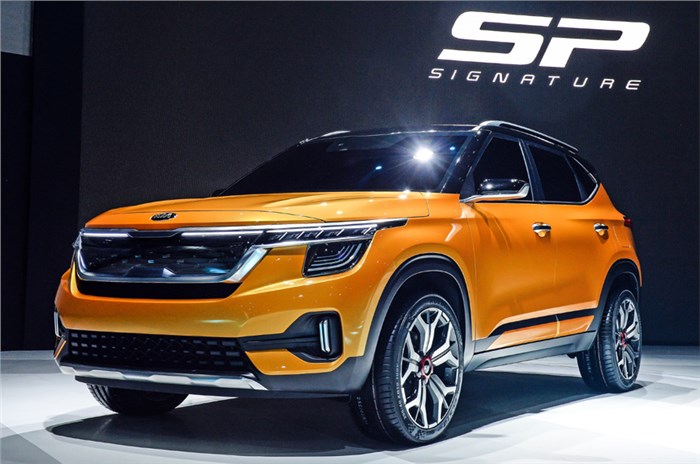 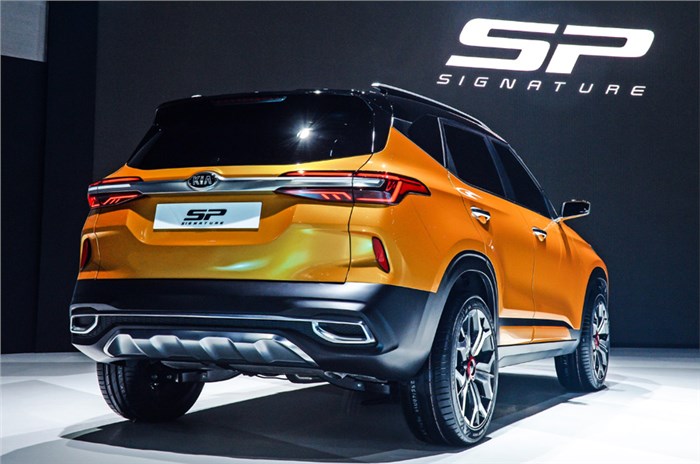 Ever since the Kia SP Concept made its global debut at the 2018 Auto Expo, it has been one of the most talked-about new cars set to be launched in the coming months. India has been keenly awaiting the arrival of Kia and the launch of its first SUV, and as we get closer to that day, the covers have come off the Kia SP Signature SUV concept.

Revealed at the 2019 Seoul motor show, the Kia SP Signature SUV is labelled a concept, but take a closer look and you’ll be able to tell this is only thinly disguised as a show car. In effect, the Signature concept previews a near production-ready Kia SP SUV. It still features small, fancy-looking ORVMs and 19-inch alloy wheels (the production model will get 18-inch alloys), but the Kia SP Signature also sports a number of changes over the SP Concept we saw at the 2018 Auto Expo.

While it retains the bold ‘Tiger Nose’ grille and sharp-looking LED lights (connected by a light bar atop the grille), the Kia SP Signature gets a contrast roof, studded mesh finish for the air dam, slim LED fog lamps, pull-type door handles (as opposed to the flush-fitting examples seen on the original concept), a different treatment for the D-pillar, prominent roof rails, a chunkier chrome bar connecting the mildly reshaped tail-lights and a tweaked design for the faux exhaust garnish and rear diffuser. Put aside the concept car elements, and the SP Signature is effectively the production-spec Kia SP SUV, which is expected to make its global debut at the 2019 New York auto show in April 2019.

The Kia SP’s interior is expected to be well-appointed and will get a handful of segment-first features as well. Equipment on offer is likely to include a large touchscreen infotainment system, a 360-degree camera, wireless charging and in-car WiFi. A head-up display, an ambient lighting package and a fully digital instrument cluster (as seen on the concept) will also likely be on offer on the top-spec variant.

Engine options for the Kia SP (Trailster) SUV are expected to include a 1.5-litre petrol and a 1.5-litre diesel engine. Both engine options are likely to be BS-VI-ready, but will be BS-IV-compliant at launch. Both engines will be available with a choice of manual and automatic gearboxes, and Kia is even said to be working on a sportier variant of the SP SUV, with a 140hp, 1.4-litre turbo-petrol engine paired to a seven-speed dual-clutch automatic gearbox with paddle shifters.

When it is launched in India in the second half of 2019, the Kia SP’s price is expected to be in the range of Rs 10-16 lakh (ex-showroom). At that price point, the SP will rival the Hyundai Creta, Nissan Kicks, Renault Captur, Tata Harrier, and even the lower variants of the Jeep Compass and the upcoming MG Hector.

What do you think of the design of the Kia SP Signature Concept? Let us know in the comments.