Out of the total 50,000 bookings, nearly 50 percent of buyers opted for the 1.5 diesel model; most customers who booked the 1.4-litre turbo-petrol model got it with the DCT gearbox. 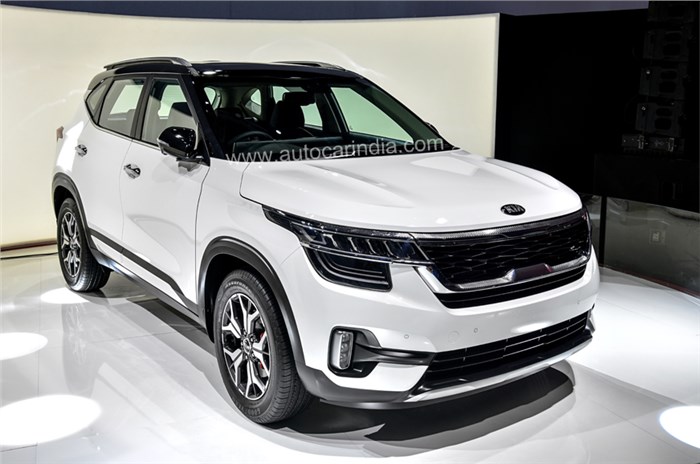 Kia Motor India’s first product, the Seltos, was launched on August 22, 2019, at Rs 9.69 lakh and we can confirm today that the SUV has gathered 50,000 bookings so far. The company officially announced commencement of bookings back in July this year. Gauging market demand, Kia also introduced two additional top-spec variants of the Seltos on September 7, 2019 called the GTX+, which is available with the 1.4-litre turbo-petrol-DCT combo and the 1.5-litre diesel-automatic option. The company has delivered over 13,750 units in the last two months, though waiting periods now stretch to three months on select variants.

The Seltos’ India line-up is split in two major trim lines with the Tech Line (with the HT badge) being the more conventional range and the GT Line (with a GT badge) being the sportier of the two – the latter comes with red accents on the exterior, unique design for the alloy wheels and an all-black interior with contrast red stitching, to name a few of the changes over the HT Line.

The Seltos is available with three BS6-compliant engines – two petrols and one diesel. The 1.5-litre petrol delivers 115hp and 144Nm of torque and is available with a 6-speed manual gearbox and a CVT automatic option. The 1.4-litre direct-injection turbo-petrol engine is good for 140hp and 242Nm of torque and comes with either a 6-speed manual or a 7-speed dual-clutch automatic. The 1.5 diesel makes 115hp and 250Nm and is paired to 6-speed manual or torque convertor automatic gearbox.

Key features on the top-spec GTX+ variants of the Seltos include a standard sunroof, ventilated front seats, a Bose sound system, a 360-degree camera, front parking sensors and leatherette seats. The GT Line range also gets six airbags, rain sensing wipers and an 8.0-inch head-up display as standard. These features are not available on the Seltos Tech Line trims.

While the Kia Seltos is out current pick of the midsize SUVs, which include the likes of the Renault Captur, Nissan Kicks, Mahindra XUV500, Tata Harrier, MG Hector and Hyundai Creta, the model could see even stiffer competition from the next-gen Creta SUV, which is expected to be launched in the Indian market sometime around February 2020.