The Korean carmaker sold 26,640 units of the Seltos within just three months of launching the SUV. 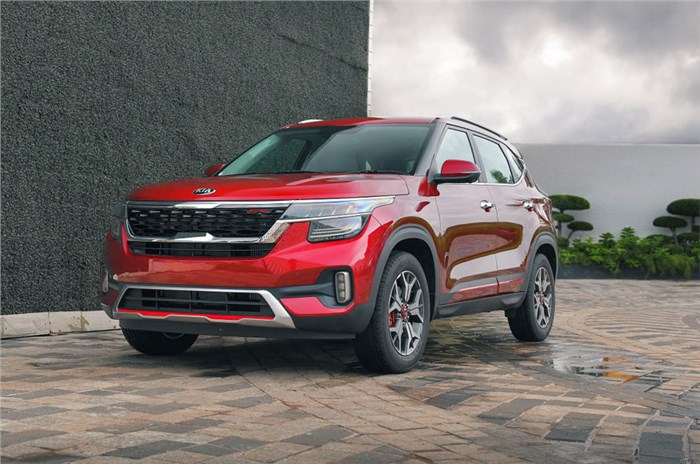 With sales of 12,850 units in October, the Kia Seltos has sold 26,640 units since August*, which constitutes a monthly average of 8,880 units. Good going for a new brand in India.

Three months after Kia Motors India began selling its first product, the Seltos SUV, the company has notched its best monthly sales yet – 12,850 units – and crossed the 25,000-unit (total) sales milestone in the domestic market. The carmaker reportedly sold 2,184 Seltos SUVs on Dhanteras (October 25), which is popular in India for purchase of a new vehicle, among other consumer buys.

The Seltos, which was officially launched in India on August 22, sold a total of 6,236 units that month, opening the Korean carmaker’s Utility Vehicle market share account with 1.72 percent to its name. That number also saw the Seltos become India's fourth bestselling UV, entering the Top 5 UV chart in its very first month of sale.

In September, the company despatched 7,554 units to its showrooms across the country, moving up to third place in the Top 5 SUV and MPV chart, and expanding its UV market share to 3.09 percent. Now, with robust October sales, the company is well placed as a strong challenger brand to the top two SUVs in the bestsellers' list – the Maruti Vitara Brezza and the Hyundai Venue.

Kia Motors India, which got 6,046 bookings on a single day when online bookings opened on July 17, currently claims to have over 60,000 bookings in hand and is aggressively driving production at its 3,00,000 units per annum Anantapur plant in Andhra Pradesh to meet the surging demand for the Seltos.

What is helping the BS6-ready Seltos make headway in the competitive Indian SUV market is its very aggressive pricing. The Korean carmaker's pricing strategy for all of 16 variants covers virtually every price point and starts from Rs 9.69 lakh (for the entry level petrol Smartstream G 1.5 HTE model) and goes up to Rs 15.99 lakh (for the diesel 1.5 CRDi HTX+ (6AT) and Petrol Smartstream 1.4 Turbo GDI GTX (7DCT) and GTX+ top-end variant). With this, it takes on rivals like the Hyundai Creta, MG Hector, Nissan Kicks, Mahindra XUV500 and the Renault Captur in India.

The Seltos, which is produced at two of Kia’s production facilities – in Anantapur district, Andhra Pradesh, and in Gwangju, Korea – is seeing strong demand in both markets. The robust demand for the made-in-India Seltos also means it is outselling the Korean-made Seltos.

*As per SIAM data