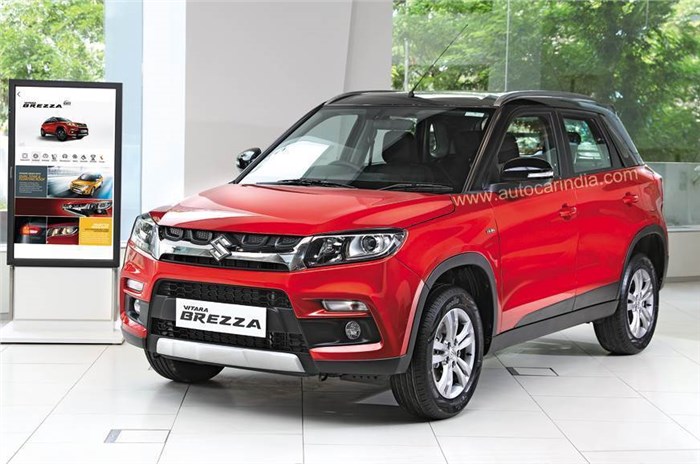 If the month of September offered a glimmer of hope for the beleaguered Indian automobile industry, then it was in the performance of the utility vehicle (UV) segment, which includes SUVs and MPVs. That’s because it is the only sub-segment in the entire industry to have recorded growth, while all the others continue to see splashes of red ink. At 81,625 units sold, the segment clocked 5.49 percent year-on-year growth. Contributing to this performance are the top five bestselling SUVs and MPVs, which together account for 38,783 units or a sizeable 47 percent.

Smarting from the loss of its crown in July to Hyundai’s first-ever compact SUV, the Maruti Vitara Brezza has regained the prime position as India’s bestselling utility vehicle in September. With sales/dispatches of 10,362 units last month, the Maruti compact SUV recorded its second-best monthly figures in the first six months of this fiscal. In April 2019, it had sold 11,785 units.

The lack of a petrol engine in the face of the growing consumer shift from diesel to petrol has impacted the Vitara Brezza adversely over the past year. Newer rivals like the Hyundai Venue and Mahindra XUV300, both of which are available with petrol engines, have not helped things either. The Vitara Brezza has been on sale since 2016, with just a single diesel engine option mated to either a 5-speed manual or an AMT gearbox and till end-September 2019, the compact SUV has sold a total of 4,72,755 units.

However, by February 2020 the Vitara Brezza will fight back with a petrol engine under the hood. Maruti Suzuki has begun road testing of the refreshed Vitara Brezza, which is likely to debut around the Auto Expo 2020 in February next year, exactly four years from the model's world premiere at Auto Expo 2016, in New Delhi.

Suzuki’s latest K15B 1.5-litre engine, which debuted in the Ciaz last year, will power the new Vitara Brezza. This 1,462cc engine develops 105hp and 138Nm of torque. Also part of the package will be Suzuki’s Smart Hybrid system, which features an integrated starter generator and dual-battery setup. The use of the 1.5-litre petrol engine would mean the Brezza won't qualify for the excise duty sops extended to cars under 4m in length and with engine capacities under 1,200cc (for petrol cars). The upcoming Vitara Brezza petrol will replace the current diesel-powered model. The company had announced earlier this year that it will stop selling diesel cars from April 1, 2020, due to the upcoming BS6 emission norms.

The Venue is leading Hyundai’s charge both in the domestic and export markets. From launch on May 21 till end-September, the compact SUV has sold a total of 42,681 units comprising 18,181 diesel and 24,500 petrol variants, which makes for a 43:57 percent ratio and is indicative of the consumer preference for petrol power in the domestic market. The Hyundai Venue comes with three engine options – a 90hp, 1.4-litre diesel, an 83hp, 1.2-litre naturally aspirated petrol unit, and a 120hp, 1.0-litre turbocharged unit.

For the first six months of FY2020, Hyundai has made the maximum UV market share gains of over 6 percentage points: from 13.84 percent a year ago to 20.23 percent. The product that is giving Hyundai new heft is the Venue SUV – of the total 90,388 Hyundai UVs sold, the Venue accounts for an overwhelming 47 percent. The company says it has around 75,000 bookings for the Venue, which means this is one model that will continue to be in the news. And, in a bid to showcase the SUV’s strengths, the company has embarked on ‘The Hyundai Great India Drive’, which was flagged off from the ‘Statue of Unity’ in Gujarat on October 16. This event sees a fleet of Venues travel to 17 historic locations across the country.

The recently launched Kia Seltos made an entry into the Top 5 UVs chart in fourth place in the very first month of its launch in August, with 6,236 units sold. It moves up one rank in September. With 7,942 units to its credit and a total of 13,790 units in two months, the Seltos has helped Kia take a 3 percent UV market share. The diesel-petrol variants split is 47:53 percent.

Gauging market demand, Kia also introduced two additional top-spec variants of the Seltos on September 7 – the GTX+, which is available with the 1.4-litre turbo-petrol-DCT combo and the 1.5-litre diesel-automatic option. Waiting periods now stretch to three months on select variants.

And, considering that Seltos exports have also begun, Kia is aggressively driving production at its Anantapur plant to meet the surging demand for its first made-in-India product.

The Hyundai Creta maintains its No. 4 position, with sales of 6,641 units, which is better than the 6,001 units in August 2019 and 6,585 units in July, but considerably less than the 8,334 units in June. Creta sales have been slowing for some time now and it looks to have been impacted by the newest SUV in town, the Kia Seltos. The Hyundai Creta has been on sale for four years now, although it has been upgraded through the years with refreshed styling and more equipment – which is why Hyundai India plans to launch of the all-new Creta next year, when it completes 5 years in the Indian market.

The Maruti Ertiga MPV rounds off the Top 5 UVs list with 6,284 units, considerably less than the 8,391 units in August. The Ertiga in its new avatar is seeing decent demand. With its modern design, ample space, thoughtful features and a value-for-money package, the new Ertiga is ticking most of the right boxes for family and fleet buyers.

Maruti Suzuki’s MPV is setting a good pace and that too in depressed market conditions. Meanwhile, the recently launched Ertiga-based XL6 MPV, available only in petrol, sold a total of 3,840 units in September, which along with the 2,356 units in August add up to 6,196 units for the two-month period.

Consumer buying patterns are shifting towards SUVs and with stringent safety norms coming into effect from October, there is a trend of hatchback sales somewhat moving towards safer vehicles. With Diwali coming up, SUV makers are hoping the pace of sales increases.