Kia takes the lead in connected tech with over 50,000 customers opting for variants with the UVO Connect feature. Kia will offer advanced connectivity across its entire future portfolio. 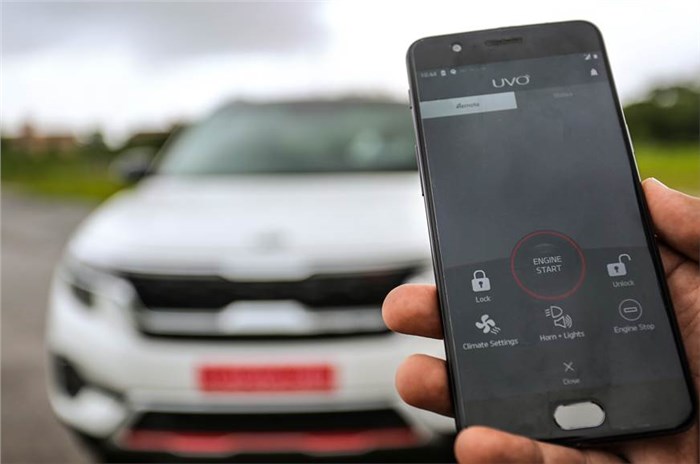 Having made its entry into our market almost a year ago, Kia has become an automaker known to equip its cars rather well. It was one of the early players to introduce connected car technology in India with the debut of the UVO Connect functionality on the Seltos, which was later extended to the Carnival MPV. Building on the momentum, the automaker has confirmed that Indian buyers can expect smart connectivity features on every new model to come out of its stable moving forward.

In a recent interaction with Autocar India, Vivek Goswami, general manager, product planning, Kia Motors India, said, “Our intention is to offer this feature (UVO Connect) on all the cars which we bring in this market in the future.”

After establishing ground with its first two products, the company is now gearing up to launch the Sonet compact SUV that is touted to sport a 10.25-inch touchscreen bundled with the connectivity tech. High-end trims of all subsequent models, including the Ertiga-rivalling MPV that is expected to follow the Sonet, will continue the trend of packing in the SIM-based functions.

Kia’s decision to universally offer this premium feature also hints at its intentions of staying away from the budget-end of the market. Its sister company Hyundai, in comparison, operates in the entry-level segment with models like the Santro, Grand i10 Nios and Aura, which miss out on the company’s Blue Link connectivity tech found in models higher up the price ladder.

Kia offers its UVO Connect feature on the high-end HTX/GTX trims of the Seltos and the range-topping Carnival Limousine. Of the total 93,839 sales made till June 2020, 50,000 units are reported to have been equipped with the advanced functionality, establishing Kia as a leader within the vehicle connectivity space. The figure also indicates a significantly higher customer preference for fully-loaded variants.

An increasing footprint has helped sensitise the customer base about the new technology. Goswami revealed that more than 95 percent of owners who have purchased a variant with UVO Connect have “downloaded the app, activated the car and used the service”.

Geo- and time-fencing most used features

Of the plethora of services this technology bundles in, geo-fencing and time-fencing have proven to be of particular interest to chauffeur-driven customers for tracking and monitoring the status of the car in their absence. Remote control functionality, especially remote engine start, has found frequent use too.

Dedicated assistance from a call centre, which can be triggered using any of the toggles on the interior mirror, has also been received well. Providing further insight, Goswami mentioned that over 10,000 calls are being made to their call centres each month, indicating a healthy usage of what is still a novel feature.

In addition to bringing in technology from its global portfolio, Kia is also focusing on developing bespoke features suited to India. “Irrespective of the availability in the global markets, if something is required, then we are doing that development (for India),” said Goswami.

Both the Seltos and Carnival, for instance, are equipped with an air purifier which, with the latest UVO update, can also be operated remotely, allowing owners to let the cabin air quality improve even before stepping into the vehicle. The product head mentioned that the functionality was not available globally and was exclusively developed to address Indian customers’ concerns about air pollution.

With a firm grasp over the connectivity requirements of today, the Korean automaker is already planning upcoming feature additions. OTA (over-the-air) updates, which allow infotainment software to be wirelessly updated without the need to visit a workshop, are a prime candidate. Goswami believes that another key development area could be in-car payments to make contactless transactions seamless at fuel pumps and other places. In the midst of the COVID-19 pandemic, this a feature car owners would certainly welcome.

Despite the rising usage trends, connected car functionality remains a novelty in our market today. However, with an increasing number of manufacturers adopting the technology and introducing a greater variety of features, more customers are set to experience this new layer of interaction with their vehicles. As the exposure to the technology improves, it does have the potential to move a few notches higher on the priority list of future car buyers.