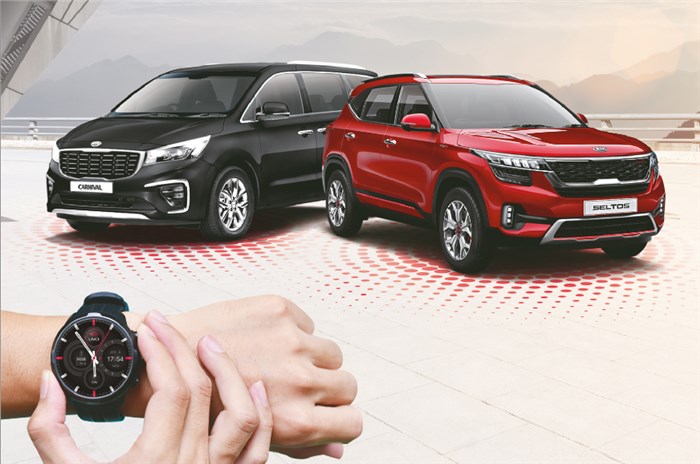 Kia Motors has updated its UVO connected car technology with more features. First seen on the Seltos SUV in India, the UVO system was launched with 37 features, but it now boasts  more than 50 connected car features. The new features available on the UVO system have already been introduced in the updated Kia Seltos last month.

Kia has introduced a new voice-assisted wake up command for the UVO system which is activated by the user saying 'Hello Kia'. Along with the wake-up command, there are nine new voice commands. These include those for calling, weather information, time and date, Indian holiday information, cricket score, media control, navigation control and climate control.

Other new additions include the remote smart pure air feature that monitors the air quality index inside the vehicle before the user steps in, and the UVO Smart watch app connectivity, which allows the user to operate the connectivity features through a smart watch that is built on Android, iOS or Tizen operating systems.

The Korean carmaker also announced that it has sold 50,000 connected cars in India. Kia claims it’s the only manufacturer in the country to secure this feat in just over 10 months from its first product launch. Kia’s UVO connected car technology is offered in both its products in India, the Seltos SUV and the Carnival MPV.

Commenting on the achievement, Kookhyun Shim, MD & CEO, Kia Motors India said, “We have attained this landmark figure due to our strong determination and continuous efforts to bring innovation and next-gen technology to our customers. At Kia Motors India, we are committed to meet new consumer demands and fill the gap in what’s offered to them. Kia’s innovative UVO connect technology has brought about a significant change in the way owners engage with their cars in India. Now with the updated UVO connect features in the new Seltos and upcoming Sonet, Kia has made driving even more fun, safe, convenient and comfortable.”

What’s to come from Kia?

Kia’s third product for India, the Sonet compact SUV, is scheduled to launch around August-September 2020, in time for the festive period. As we reported earlier, the carmaker has confirmed that the Sonet launch is on track despite delays caused by the pandemic-enforced lockdown. Expect prices for the Sonet to be in the Rs 7-12 lakh range.

Being a sub-4m SUV, the Sonet will rival the Tata Nexon, Maruti Suzuki Vitara Brezza, Ford EcoSport, Mahindra XUV300 and its cousin, the Hyundai Venue. Further down the line, the Kia will also have to contend with the Renault Kiger, Nissan Magnite and the Toyota Urban Cruiser.