Tata rolls out the 1,50,000th unit of the Nexon at its Ranjangaon manufacturing facility. 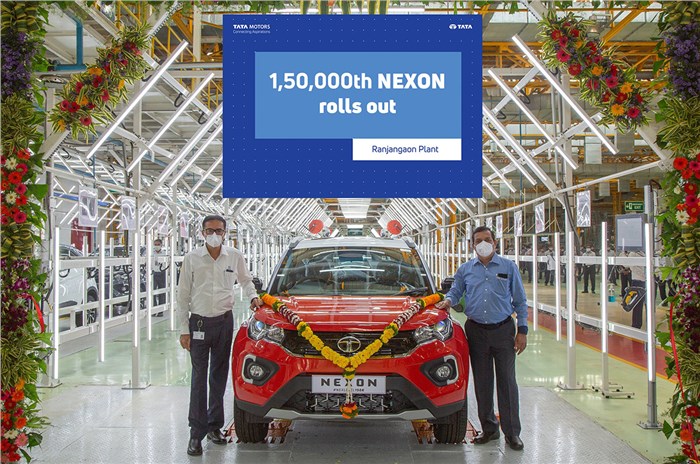 The Tata Nexon celebrates a major milestone today as its 1,50,000th unit rolls off the production line from the carmaker’s Ranjangaon facility in Pune.

In addition to these feats, the Tata Nexon also became one of the first compact-SUVs in India to receive a full 5-star adult safety rating by Global NCAP.

Since its initial introduction, Tata has launched a facelifted Nexon with updated styling, features and BS6-compliant engines. You can read about how the updated car drives in our Tata Nexon facelift review.

In order to celebrate this achievement, Tata has started a new social media campaign for its Nexon customers called #Nexlevel150K. In essence, Nexon owners can participate by using the hashtag and sharing their stories and experiences with their car.

The best entries will get a chance to meet cricketer and brand ambassador, KL Rahul (Vice-Captain of the Indian Cricket Team), along with a cash prize of Rs 1,50,000.

The Tata Nexon facelift is available with both petrol and diesel engine options. The petrol engine is a 1.2-litre, turbocharged unit that puts out 120hp and 170Nm of torque. The diesel on the other hand is a 1.5-litre, four-cylinder unit that produces 110hp and 260Nm of torque. Both engines can be had with either a 6-speed manual or AMT gearbox.

As the Tata Nexon competes in the compact-SUV segment, it faces stiff competition from the Kia Sonet, Hyundai Venue, Maruti Vitara Brezza and Ford EcoSport. The segment is set to get even more competitive with the launch of the Nissan Magnite in the near future.

In terms of future products, Tata is preparing its new flagship model the Gravitas for launch in the coming months. It is also developing a new compact SUV based on the HBX concept, slated to arrive early next year and will be positioned below the Nexon in Tata’s line-up. Lastly, Tata is also working on a turbo-petrol version of the Altroz, slated to launch soon as well as an EV derivative of the Altroz premium hatchback.