Volkswagen’s long awaited midsize SUV will be up against segment leaders, the Hyundai Creta and the Kia Seltos, but will also directly rival the Kushaq from sister brand Skoda, with which it has a lot in common. 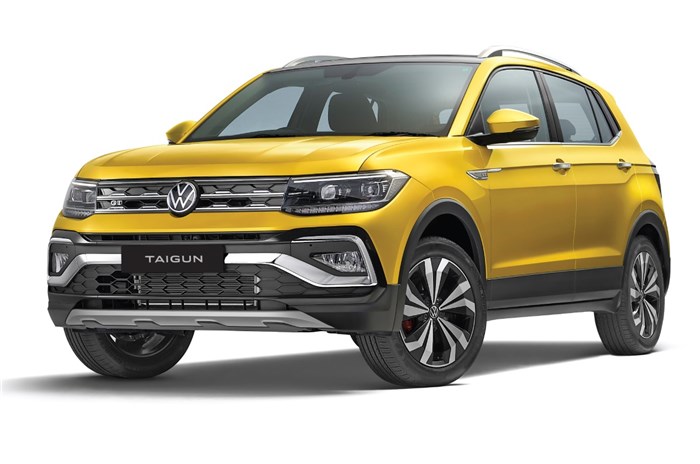 Taigun has clean, understated looks that will stand the test of time. Lots of chrome gives the bling Indian customers want. 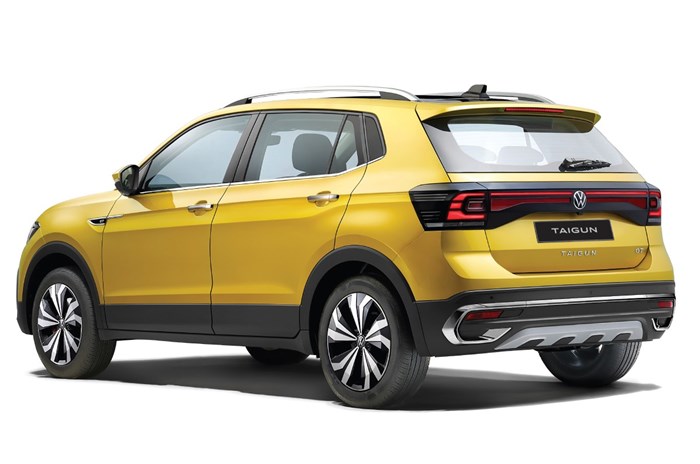 Rear tail light that cluster runs across the tail gate is distinctive and accentuates the width of the Taigun. 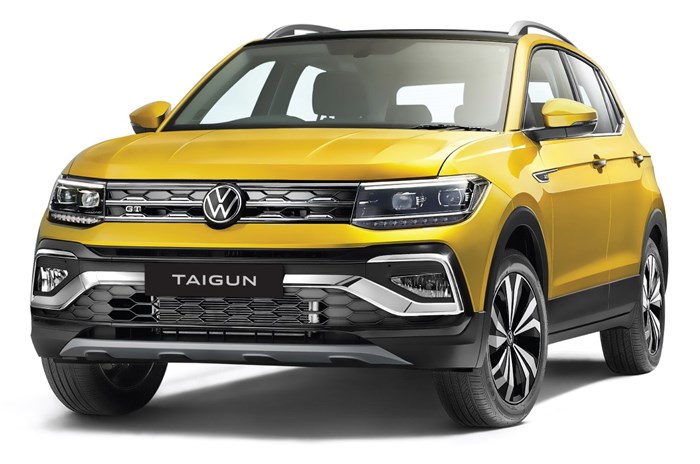 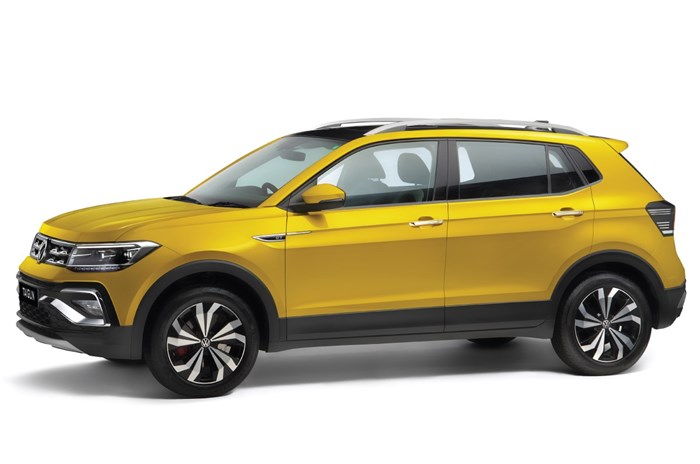 There’s lots in common with the Kushaq from sister brand Skoda. The doors, glasses and roof panel are identical.

Going ‘glocal’ is a much-bandied term by multi-nationals that claim their products are tailored for local tastes whilst they still adhere to the company’s global brand values. Some companies like fast food giant McDonald’s get it absolutely right and become a case study for others to follow. Others get it woefully wrong and are out of sync with what the market wants. One such company is Volkswagen India, which couldn’t quite manage to put a finger on the pulse of the Indian customer, and as result remained a fringe player for the decade it’s been around. It’s commendable that Volkswagen hasn’t compromised on quality, which is great, but the trouble is that the uncompromising build quality has come at a cost, a disproportionately high cost. A European cost.

The truth is that Volkswagen India held its products (built with low local content and with expensive European parts) in higher esteem than its own customers did. Reality began to bite when the Korean brands and other established players with a barrage of new products stoked a deeper sense of value in the hearts of Indian car buyers and stole market share from under Volkswagen’s nose.

Volkswagen knew it had to adapt or perish. It tore up the rule book and had it re-written, but this time by Skoda. Who would have thought that one day this blue-blooded brand would entrust its future in India to its Czech sister company? The Volkswagen Group’s new Indian entity Skoda Auto Volkswagen India has been tasked to develop all future VWs and Skodas for the Indian and other emerging markets. But thinking the unthinkable is the ethos of ‘India 2.0’, the Volkswagen Group’s rebooted and radically different game plan for a fresh stab at the Indian market.

The Taigun is the first VW product to come out of India 2.0 and embodies the German automaker’s new approach to the Indian market. The Taigun is a car conceived with Indian values but built on a proven global platform. In the development of the Taigun, it was the company’s India team telling Wolfsburg what needs to be done and not the other way around. The result is an all-new SUV built with 95 percent local content and engineered to suit Indian tastes and pockets.

Based on the VW Group’s MQB-A0-IN platform, the IN prefix sums up the extraordinarily high (for VW) level of indigenisation the Taigun is born with, but there’s no mistaking this SUV for anything other than a Volkswagen.

The production-spec Taigun isn’t very different from the concept car shown at last year’s Auto Expo. This 4.2 metre mid-size SUV has a clean-cut design with understated lines, and like most VWs, it will stand the test of time. Cars like the Polo and Vento don’t look like the decade-plus old cars they are, and similarly the Taigun has been designed with the same timeless pen. Except that this time round, VW has spiced things up by keeping Indian tastes in mind from the get-go. And this is most obvious in the front. Whilst the thick horizontal grille bears resemblance to other VW SUVs, the ‘masala’ in the recipe is a big dollop of chrome. In fact, the Taigun has more chrome than you’ll see in any other VW, to entice Indian buyers. Chunky chrome wedges atop the horizontal bars that run the length of the grille look appropriately flashy, but it’s the massive chrome bit surrounding the fog lamps that adds serious bling. Other SUV elements, like a large air intake below the bumper and a tough looking skid plate, are all there and the Taigun, with its muscular bonnet, looks imposing if a tad conventional from the front. It’s not as radically styled as the Creta, or even the Kushaq for that matter, which sports a split headlight cluster that looks sleeker than the Taigun’s. But the Taigun has that all important road presence

The rear too is not as restrained as other VWs and the Taigun’s designers have let themselves loose here too, with a flashy chrome bar above the skid plate and a very distinctive tail-light cluster that runs across the width of the tailgate. Not only does the tail-light cluster stand out, it accentuates the width of the car which, as we found it when we got inside, isn’t as much as we thought.

From the side, the Taigun looks pretty similar to the Kushaq and that’s no surprise because other than sharing the same platform, the same mechanicals and lots of other bits with each other, they both use the same doors and windows. The double crease line that runs parallelly across the doors and taper in the rear fender is a superb design detail. To achieve this sharp crease, an extra stage was needed in the press shop to stamp out that incredibly tight fold in the body panel.

Sharing the identical 2,651mm wheelbase as the Kushaq, the Taigun looks well proportioned and the tasteful looking alloys shod with 205/55 R17 tyres nicely fill out the wheel arches. What stands out are the bright red brake calipers which are exclusive to GT line, one of the top variants the Taigun will be launched with.

The Taigun’s interior is just as spacious as the Kushaq’s, which is to say there’s an abundance of legroom both in the front and rear, and headroom too is quite decent. The seats are very supportive, with generous bolstering all round, and you can expect a high level of comfort in the cabin; the front seats get a ventilation function too. The only downside is a lack of width, which makes sitting three abreast at the rear a bit of a squeeze. 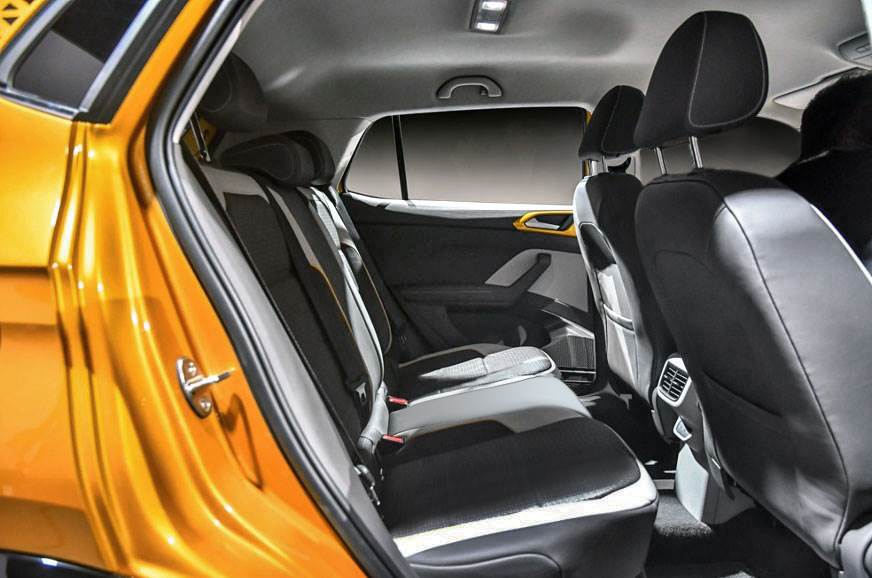 Just like the concept (pictured), all three rear passengers will get three-point seat belts and head rests.

The Taigun’s dashboard is clean and uncluttered, with the 10-inch touchscreen neatly integrated into the dash. The infotainment system has crisp, high-definition graphics and is expected to set new standards for ease of use. It has a full suite of connected features bundled in. Apple CarPlay, Android Auto and a bespoke My Volkswagen connect app are all there. There’s wireless charging too and USB Type-C which ports hint at the future readiness of the Taigun. 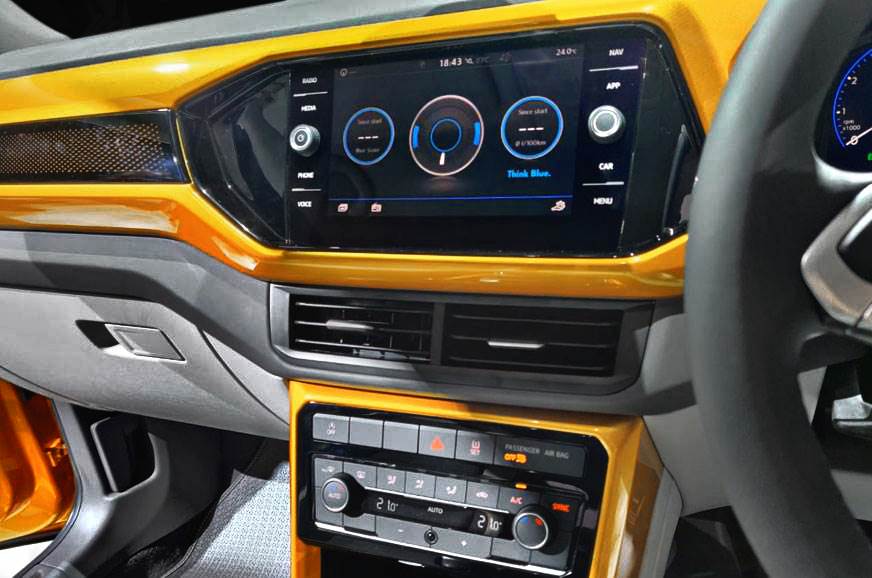 The Taigun concept's (pictured) 8.0-inch screen will be replaced with a 10-inch unit in the production car.

Again, all this kit is available in the Kushaq too, but where the Taigun goes one-up on its Czech sibling is with a full-digital instrument panel. This ‘virtual cockpit’, which is highly configurable, makes the analogue instrument cluster of the Kushaq look out of date and undoubtedly, VW will be using this feature as one of the key points of differentiation with the Kushaq. 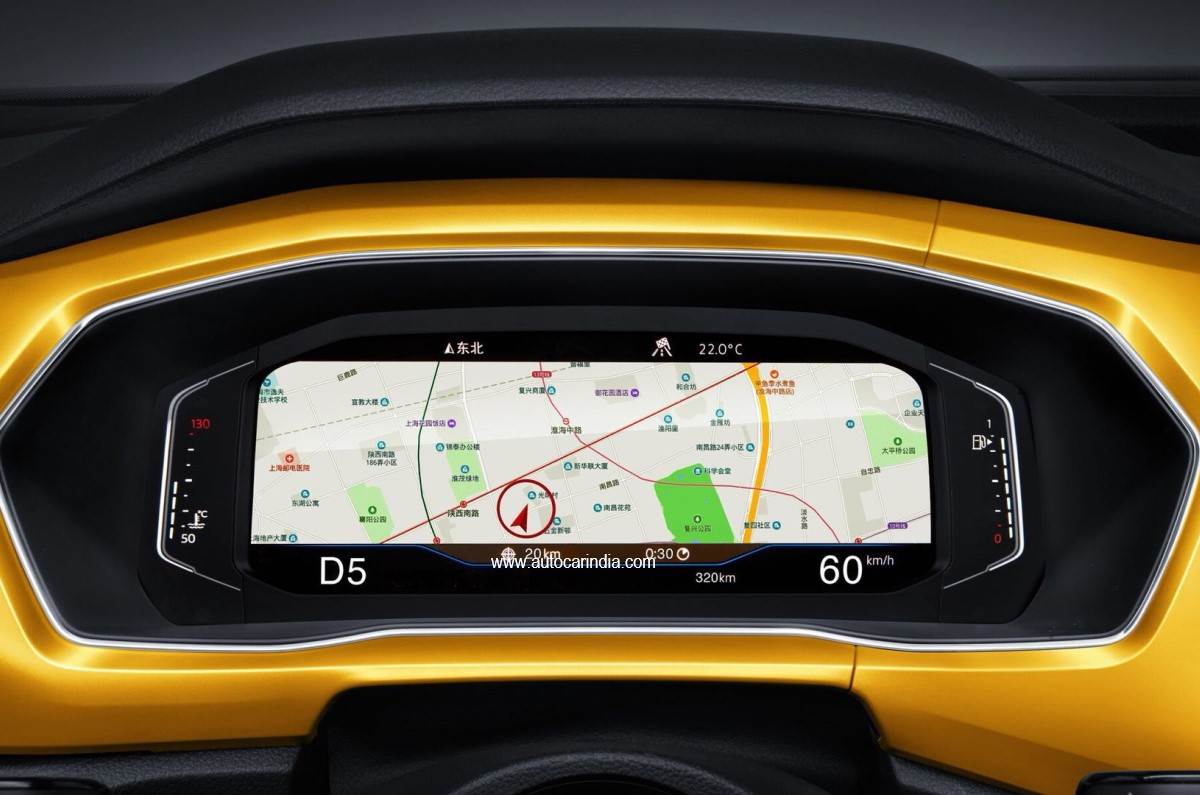 Digital instrument panel is key differentiator over the Kushaq and will be a feature most customers want.

In terms of practicality, the Taigun has generous storage areas in the cabin, though the boot isn’t the most spacious by class standards and the high loading lip calls for effort whilst loading bags. The seats split 60:40 for added versatility.

Interior quality is pretty good, with nicely textured and soft touch materials provided where it matters, though in the lower regions of the cabin you can spot some hard plastic bits. Like in the Kushaq (which shares the identical roof panel) the Taigun too gets a cheap looking woven fabric for the roof liner and a small sunroof.

There’s no stinting on safety though. The Taigun gets ESC as standard, six airbags on certain variants, tyre pressure deflation warning, child seat mounts and even the middle passenger at the rear is looked after with a three-point safety belt and his own head restraint.

The Taigun will get the same pair of 1.0 and 1.5 TSI engines and gearboxes as the Kushaq and our experience with the Skoda SUV tells us that the powertrain will be one of the Taigun’s strengths as well.

The mainstay will be the 115hp 1.0 TSI engine, which VW invested heavily to locally assemble it in India. It’s a smooth, feisty engine that punches above its weight and is mated to a 6-speed manual and 6-speed torque converter auto, and has a wide enough appeal to fulfil most needs. Of course, the 150hp 1.5 TSI mated to a smooth and fast shifting 7-speed DSG auto will enhance the driving experience to a different level and is clearly the enthusiast’s choice.

And it’s the enthusiasts, those looking for driving pleasure in a tough, well-built and practical SUV, that the Taigun will appeal to the most. The price too is expected to be very appealing, and though the company is tight-lipped on it, expect it to be priced between Rs 10-16 lakh when it goes on sale this August.

It looks like VW has finally learned what it means to be glocal and win the hearts of Indian customers.