Sonet will be unveiled on August 7, with bookings expected to start thereafter. Price announcement in September. 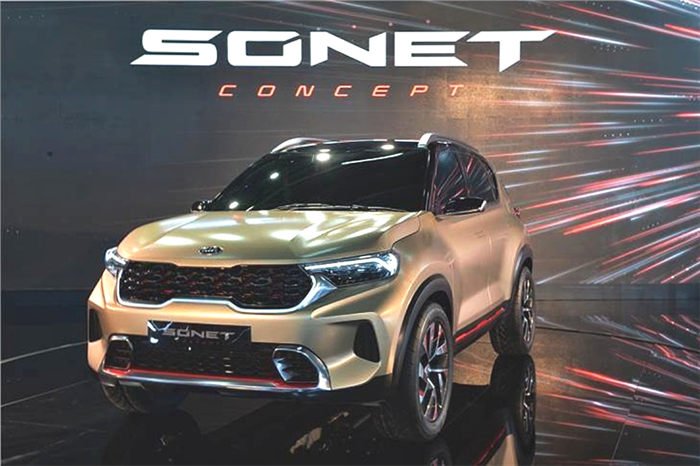 Production-spec Sonet SUV to look quite similar to the concept shown here.

Kia Motors India will unveil the Sonet compact SUV for the first time on August 7, 2020, but we can now confirm that bookings will commence in mid-August and the price and official market launch will happen in September 2020.

What are Kia’s plans with the Sonet?

Going by Kia’s sales plan reviewed by our sister magazine, Autocar Professional, the company has chalked out an ambitious sales target of 1,00,000 units of the Sonet in India and another 50,000 units for exports. These figures are an upward revision of the target announced in April 2020, which projected 70,000 units in the first year.

What features can be expected on the Kia Sonet?

The Kia Sonet is entering a fiercely competitive segment in India, and the compact SUV is expected to hit the market with a segment-leading features list. Like the bigger Seltos SUV, the Sonet is expected to have Tech line and GT Line packages and a long list of variants at multiple price points. The SUV is expected to sport equipment like a 10.25-inch touchscreen infotainment system, Kia’s UVO in-car connectivity tech, a Bose sound system and a sunroof, to name a few.

There’ll be a number of engine and gearbox options on offer – a 1.2-litre petrol-manual; a 1.0-litre turbo-petrol with manual and dual-clutch auto options; and a 1.5-litre diesel with manual and torque-convertor automatic options. In fact, there’ll also be a clutchless manual option (iMT) with the 1.0-litre turbo-petrol engine – this technology has debuted  on the Sonet’s rival and platform-sibling, the Hyundai Venue recently.

Kia Sonet to be exported solely from India

Interestingly, Kia Motors India’s plant in Andhra Pradesh will be the sole production base in the world for the Sonet, and which points to the potential for big export numbers for the compact SUV. Speaking to Autocar India earlier this year, Han-Woo Park, then president and CEO of Kia Motors, said: “When our global partners saw the Sonet, they got a shock. This is a model everyone wants to have. The Sonet will be the symbolic model for our exports from India.”

On May 28, 2020, Kia Motors India announced an additional investment of $54 million (Rs 400 crore) in Andhra Pradesh, where it has its manufacturing plant at Anantapur. The Korean carmaker has already invested around $1.1 billion (Rs 8,141 crore) at Anantapur, which has an existing 3,00,000 units-per-annum-capacity plant, and the additional investment is expected further help the company ramp up production by around 1,00,000 to 1,50,000 units, as it expects to further increase domestic sales and exports from the country.