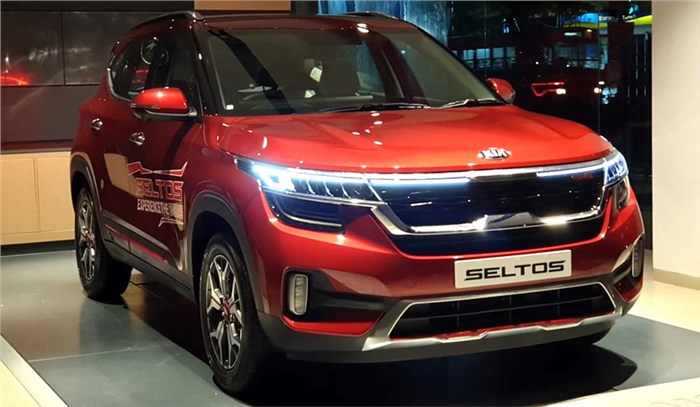 Since the time it was revealed, plenty of information about the Kia Seltos has been leaked in bits and pieces ahead of its launch, which is scheduled for August 22, 2019. There has been no shortage of unofficial variant break-ups, but one little detail that caught the eye of a number of potential buyers was the absence of a true top-end variant for the 1.4-litre petrol dual-clutch automatic transmission (DCT) version of the Kia Seltos. But we can now confirm the top-spec variants of the Kia Seltos automatic will be introduced a month after the SUV's launch. The range-topping X+ automatic variants of the Kia Seltos petrol and diesel will come a month down the line to make the Seltos' price range look attractive at launch, a strategy often followed by carmakers.

Dealers have recently been instructed to start accepting bookings for the Kia Seltos GTX+ DCT, which will be powered by the 140hp, 1.4-litre turbo-petrol engine, mated to a 7-speed dual-clutch automatic gearbox. There will also be an HTX+ automatic version of the Kia Seltos diesel. Sitting at the top of the variant line-up, the X+ variant will pack in extra goodies such as an electric sunroof, an eight-way powered driver’s seat, ventilated front seats, a 360-degree camera, a 400W, eight-speaker Bose audio system, a blind-spot monitor and front parking sensors, in addition to the features available on the X, which include six airbags, an 8.0-inch head-up display, a 10.25-inch touchscreen infotainment system, Kia’s UVO Connect suite with a free three-year subscription and wireless smartphone charging, to name a few.

At the media drive event, Kia officially revealed the Seltos will be available in two variant lines – HT Line (which stands for Tech Line and is geared more towards luxury) and GT Line (which stands for Sports Line and adds sportier elements to the package). These variant lines are further divided into individual variants – the base E (Energy), mid-spec K (Klass) and top-spec X (eXtreme). While the 1.5-litre petrol and diesel engines will be available in Tech Line guise, the 1.4-litre turbo-petrol will only be available in GT form, and to that effect, will feature sportier styling bits and an all-black interior. With all engine-gearbox combinations accounted for, there will be a total of 16 versions of the Kia Seltos.

However, this fully-loaded Kia Seltos GTX+ DCT won’t come cheap. With the Kia Seltos’ price expected to range from Rs 11-17 lakh (ex-showroom), expect the top-spec X+ automatic versions to be positioned at the higher end of that price bracket.

Kia has revealed more details about the Seltos, which you can read about here. And don’t forget, our full Kia Seltos review goes live on Friday, August 9, at 9pm.