Kia’s first model for India gets a unique variant line-up and multiple engine and gearbox options. 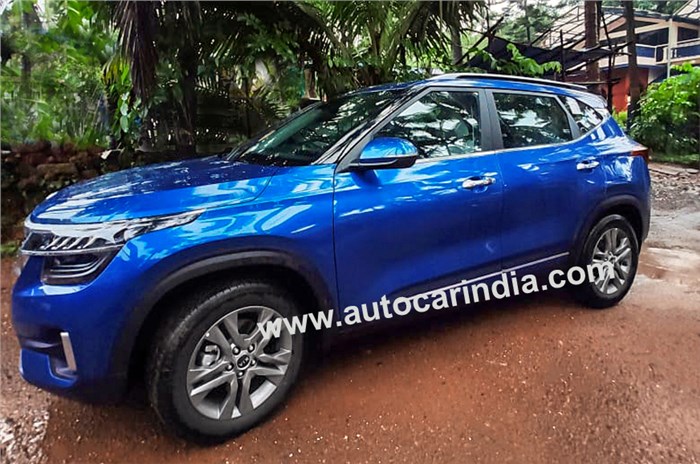 Kia Motors India has officially begun media activities for its first model in India – the Seltos SUV – which will see its market launch on August 22, 2019. While we will bring you our driving impressions of the Kia Seltos on August 9, in the meantime, check out these fresh details of the India-spec SUV that the company has shared with us.

Kia Seltos Exterior
The Seltos is the production version of the SP2i concept that made its debut at the last Auto Expo in New Delhi. It gets sharp styling with a decent dose of chrome and LED bits that give it an upmarket look. The Seltos is 4,315mm long, 1,800mm wide and 1,620mm high, which makes it a bit longer and wider than the Hyundai Creta. Kia will offer the Seltos with a long list of exterior paint options, which includes eight monotone shades and five dual-tone combinations. The company will also offer multiple tyre and wheel options, with wheel sizes ranging from 16-inch steel wheels to 17-inch alloys, available with either hyper-metallic or crystal-cut pattern.

Kia Seltos Engine and Gearbox
The Seltos will be sold in India with three BS6 engine options – a 1.5-litre petrol good for 115hp and 144Nm of torque, a 1.5-litre diesel that delivers 115hp and 250Nm of torque, and a 140hp/242Nm 1.4-litre turbo-petrol unit. These engines are built with Hyundai group’s ‘Smartstream’ technology and will be seen on more Kia and Hyundai models in future. Gearbox options for the Kia Seltos include a 6-speed manual (all three engines), a 6-speed automatic (on 1.5 diesel), a 7-speed DCT (on 1.4 turbo-petrol) and a CVT (on 1.5 petrol).

Kia Seltos Interior
Kia has equipped the Seltos SUV with a long list of features and equipment, including a 10.25-inch HD touchscreen infotainment system with navigation, a 7.0-inch display in the instrument cluster, and an 8.0-inch head-up display. There are two steering wheel designs on offer, with the sportier trims getting a flat-bottomed version. Additionally, the Seltos’ interior is replete with subtle dose of brushed aluminium and piano black trim, along with soft-touch materials, depending on variant.

Kia Seltos Variants and Key Features
As far as variants go, Kia Motors India will have two separate variant lines that will have three trims each. First up, there will be a Tech-line that will get HTE, HTK and HTX trims. The Tech-line will be available with either a 1.5-litre petrol or a 1.5-litre diesel engine option. Kia will also sell the Seltos with a GT-line variant that will include GTE, GTK and GTX trims. The GT-line will be sold with a 1.4-litre turbo-petrol engine option only and will feature a unique alloy wheel design, all-black interior and other sporty bits. Higher variants will come with a Bose sound system that will consist of eight speakers and a 400W amplifier, along with a subwoofer. The Seltos will also come with an in-car air purifier and perfume diffuser, which will have three fragrance options as well. Higher variants will feature multi-colour LED ambient mood lighting.

Kia Seltos Connectivity
The Seltos for India, just like other Kia models sold abroad, will feature its UVO connectivity suite. It works in a similar manner to Hyundai’s Blue Link system that made its debut on the Venue SUV. The Kia UVO connect gets as many as 37 features, including live car tracking, remote engine start-stop and AC control, live traffic information, SOS emergency assistance, panic notification, stolen vehicle tracking and notification along with immobilisation. It will also get Geo fencing, vehicle health report and maintenance alerts. This system will come with a free three-year subscription.

Kia Seltos India-specific Tweaks
The Seltos is a global model for Kia and will be sold in multiple right hand drive as well as left hand drive markets. For India, Kia has made country specific tweaks to the model that includes a heavy duty AC that, according to the manufacturer, will make the cabin 1.7deg C cooler in the first 30min. The India-specific Seltos also features a dual-horn setup and gets a country-specific clutch force reduction tech.

Kia Seltos Bookings and Delivery
Bookings for the Seltos are in full swing currently and, according to a few dealers we spoke to, deliveries are slated to commence sometime by end of August or early September on a first-come-first-serve basis.