Kia does not call the Carens either an MPV or an SUV, but as a ‘recreational vehicle’; think of it as a mix of both.

Kia unveiled its new three-row offering for the Indian market, the Carens, in December last year. The Carens made its global debut in India, and incidentally, the country will also be its sole manufacturing hub for both domestic and export purposes. Set to launch in February, the Carens, which will be Kia’s third mass-market product for India, aims to offer customers SUV styling with MPV practicality. We have compiled the key details you need to know about the Carens below.

The Kia Carens is based on a stretched version of the Creta/Seltos platform, similar to the Hyundai Alcazar. Dimensionally, the Carens measures 4,540mm in length, 1,800mm in width, 1,700mm in height and has a wheelbase of 2,780mm. Compared to the Seltos, the Carens is 225mm longer and 80mm taller, while the wheelbase is 160mm longer.

But what’s really interesting to note is that the Carens is longer, wider and taller than even the Alcazar, that measures 4,500mm in length, 1,790mm in width, 1,675mm in height. Even the wheelbase is greater than the Alcazar’s 2,760mm. In fact, the Carens has the longest wheelbase in this segment, which is 30mm longer than the Toyota Innova Crsyta too, although the Toyota is longer when it comes to overall length. The dimensions certainly point to a spacious interior.

The Kia Carens has a very striking presence to say the least. It has the proportions of an MPV, but also gets several styling features from an SUV. Up front, the face is characterised by a striking split-LED headlamp assembly and a sealed off grille that’s housed within a contrasting gloss back trim. The grille even features some 3D patterns and a brushed silver insert for some added bling. Down below, the front bumper is more sedately styled, although the gaping central air intake does add some character. In fact, Kia’s signature ‘Tiger Nose’ motif is now featured on the bumper and not on the grille, although very subtly.

In profile, the Carens shows some resemblance with the Seltos until the front doors, though the rear doors are much longer and it also gets a larger rear quarter glass area. The window line gets a chrome garnish and there’s a strong character line that starts from the headlamps, blends into the doors and then emerges at the rear to meet the tail-lamps. At the rear, the Carens gets a pair of wrap-around LED tail-lamps that are connected via a slim LED strip. The rear windshield is slightly raked and also features an integrated spoiler. Akin to the front, the rear bumper is also aggressively styled with silver inserts. The upright stance and body cladding all around lends it some SUV character.

In typical Kia fashion, the interior of the Carens is very well appointed with premium-looking materials and a well laid out dashboard. Interestingly, the dashboard is quite deep, extending well towards the front windshield, thanks to a slight cab-forward design typically seen in MPVs. The interior also has a clean, layered effect with the infotainment system neatly integrated in the dash. There’s even some fine detailing on the dashboard trim and on the door panels, adding some jazz to the interior. 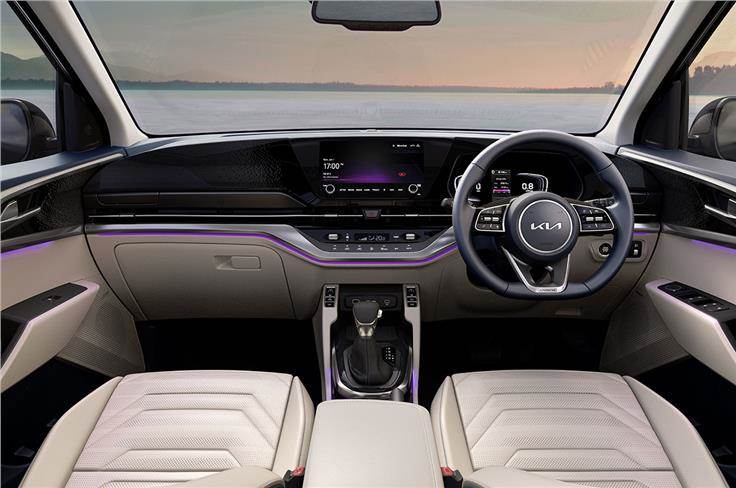 Below the top-half, the AC vents have been integrated seamlessly along the width of the interior. It also gets a new touch-based panel with toggle switches for operating the climate controls, with the ambient lighting panel underlining all of this. The centre console is short and stubby and features additional controls for seat ventilation, drive modes, etc. The Carens will be available in both 6- and 7-seat configurations, with the former getting captains seats for the second row. The third row of seats, however, do not seem the most generous in terms of space.

This being a Kia, the equipment list is a big highlight of the Carens. Top-spec variants of the Carens will come equipped with a 10.25-inch touchscreen infotainment system with Apple CarPlay, Android Auto and Kia’s UVO connect. It also gets a fully digital instrument cluster, an eight-speaker Bose sound system and a multi-function steering wheel with buttons for audio controls, voice commands and calling, similar to the one seen on the Seltos and the Sonet.

Notably, the Carens gets roof-mounted AC vents to aid cooling at the rear, which rules out the possibility of a panoramic sunroof in the future. The Carens only gets a single pane sunroof. Other highlights on the Carens include a 64-colour ambient lighting, ventilated front seats, seat-back tables with cup holders, electrically powered, one-touch tumble down feature for the second row (first in segment feature) and an air purifier. Kia has particularly stressed on safety features with the Carens as all models get six airbags, ABS, ESC, hill-start assist, disc brakes at all four ends, TPMS and rear parking sensors as standard.

Lastly, the diesel engine is a 1.5-litre unit that produces 115hp and 250Nm of peak torque and Kia offers either a 6-speed manual or 6-speed torque converter automatic gearbox. These engine-gearbox combinations are the same as the ones offered in the Seltos. 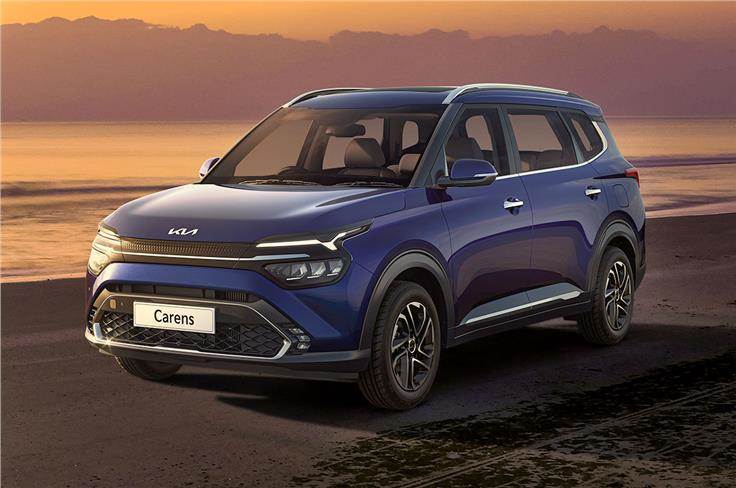 If you’d like to know how the Carens drives, keep an eye out for our review, which goes live on Sunday, January 29 at 6pm.

What are your thoughts on the upcoming Kia Carens in India? Let us know in the comments below.