We have compiled a list of sub-Rs 10 lakh cars and SUVs in India with the highest GNCAP ratings.

Safety has become paramount in every segment these days. Low cost is no longer an excuse for car manufacturers to make unsafe cars. Recently, Global NCAP reached the milestone of testing 50 cars under their 'Safer Cars For India' campaign. As per the protocol, Global NCAP usually tests the most affordable variants. However, car manufacturers are allowed and encouraged to send a higher-spec model for crash test rating.

Read the list of the top 10 cars on sale in India with the highest GNCAP crash test rating, and all priced under Rs 10 lakh. 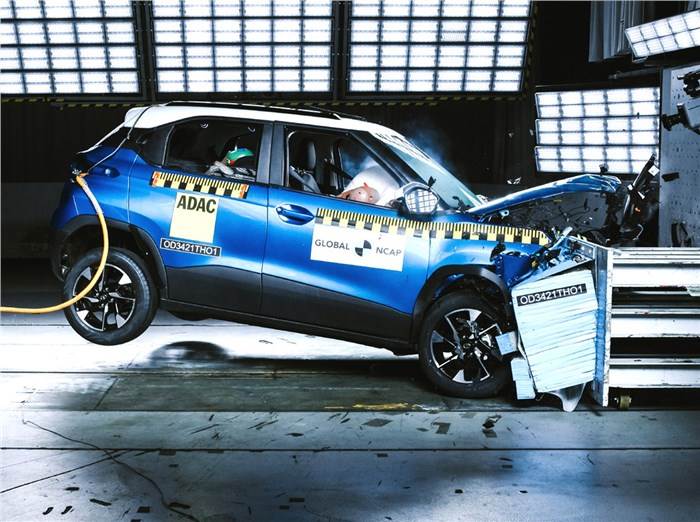 In Global NCAP’s crash tests, the Tata Punch scored 16.45 points out of a maximum of 17 (5 stars) for adult occupants, the highest score achieved by any car currently on sale in India. When it comes to child safety, the SUV earned a 4-star rating. The body shell of the Punch was rated as ‘stable’ and ‘capable of withstanding further loadings’. 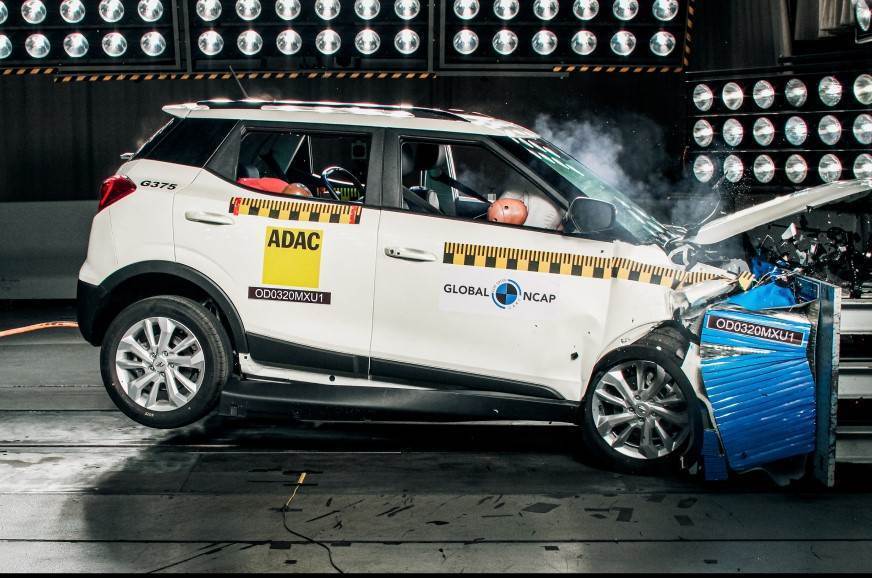 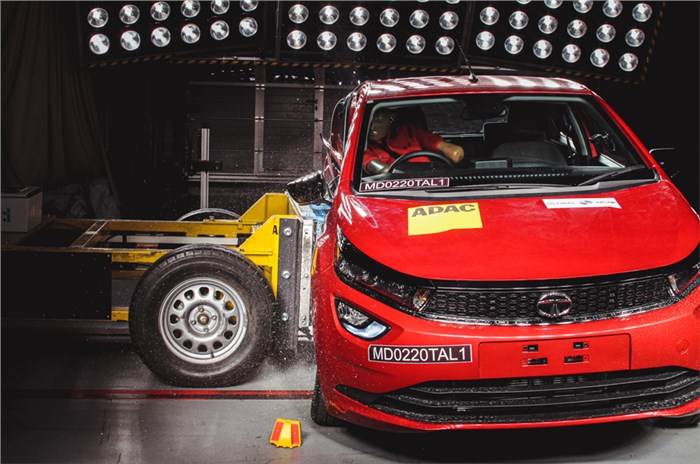 Based on the same ALFA platform as the Punch, the Tata Altroz is currently GNCAP’s highest rated premium hatchback in the Indian market. The Altroz secured 16.13 out of 17 points for adult protection, However, unlike the Punch, the Altroz scored three stars for child protection. 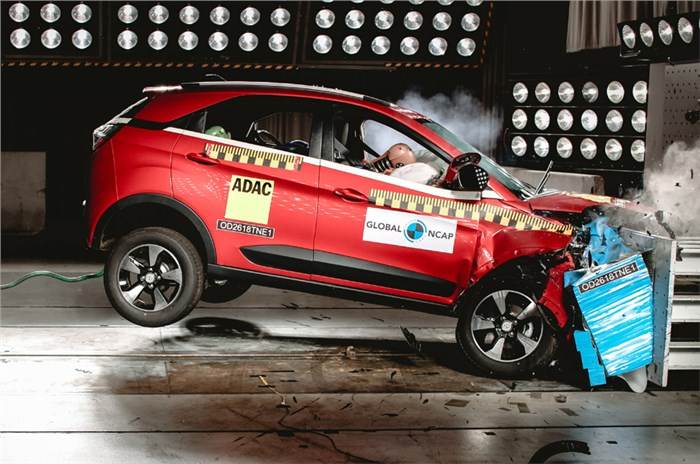 The Nexon holds the distinction of being the first made-in-India car to be awarded a full 5-star safety rating by global NCAP. Tata’s compact SUV was initially awarded a 4-star rating, with the carmaker upgrading the model post the results and sending it back for a second round where it achieved all five stars, with an adult protection score of 16.06 points out of 17. The Nexon’s child occupant protection rating is three stars, securing 25 points out of 49. The point to note is that this was the pre-facelift model that walked away with the rating, with the model currently on sale further upgraded to meet pedestrian protection norms.

All variants of the Tata Nexon come with two airbags, ABS and ISOFIX child-seat mounts as standard. Prices for the Nexon start at Rs 7.5 lakh (ex-showroom, India). 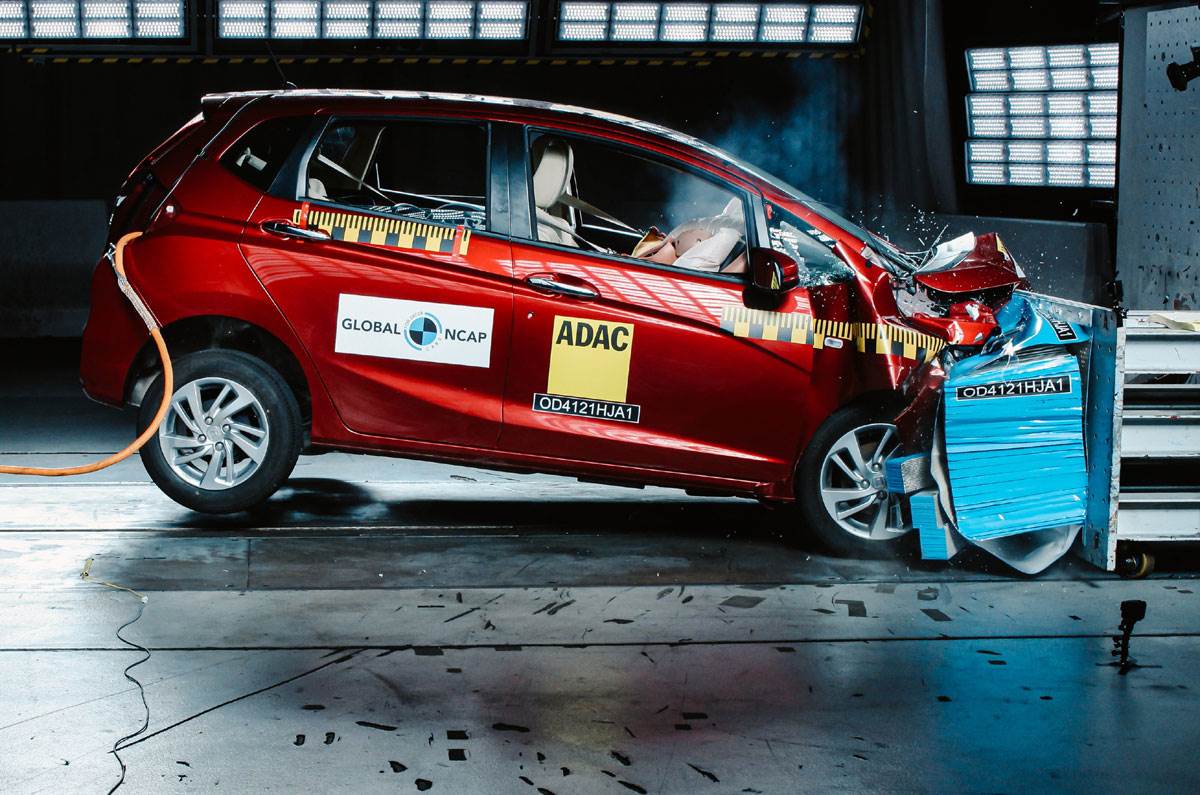 Honda’s Jazz was one of the latest vehicles to be tested and came away with a 4-star rating, with 13.89 points out of a possible 17. The Jazz tested in India is the outgoing model and not the all-new one that is sold overseas. The report noted that the Jazz’s structure was stable and could withstand further loading, with adult occupants offered good to adequate levels of protection for the head and chest area. However, front occupant knee protection was rated as marginal, due to potential impact with ‘dangerous structures behind the dashboard’. 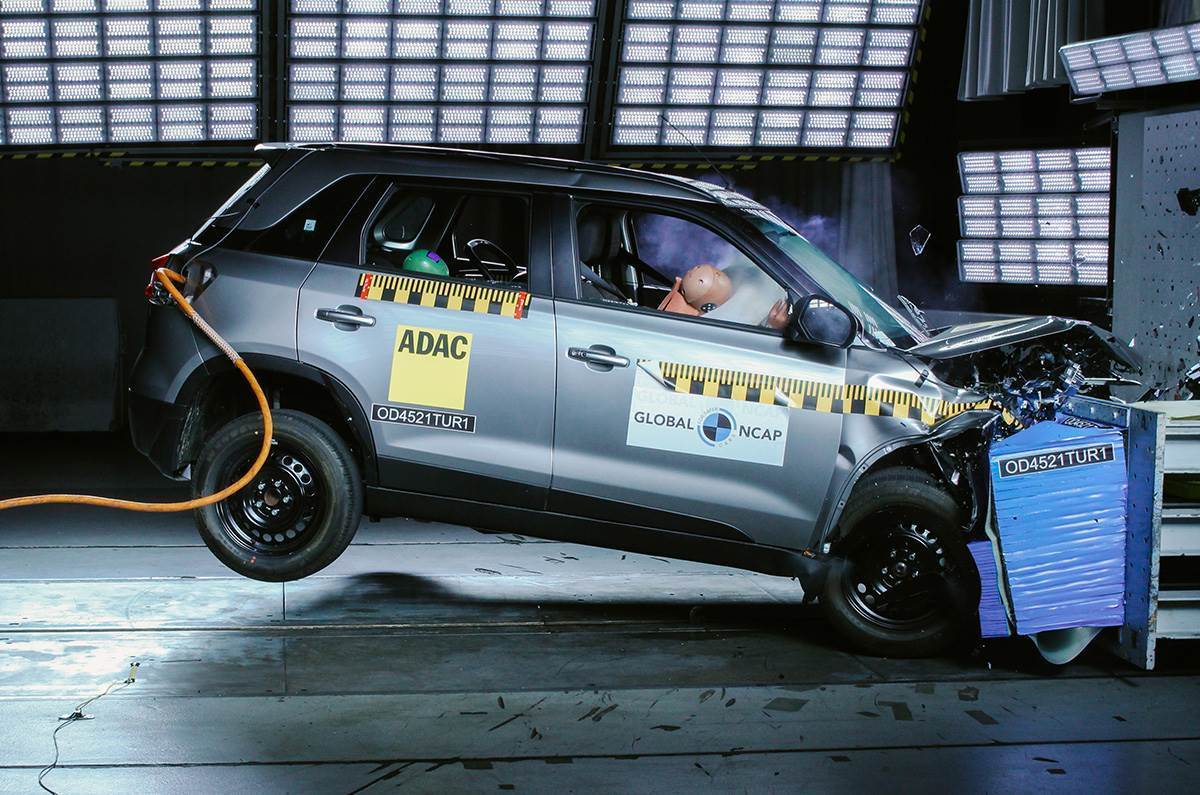 The Vitara Brezza-based compact SUV scored a solid four stars for adult occupant protection, with 13.52 points out of a maximum 17. The bodyshell was rated 'stable' and capable of withstanding further loadings. However, the car recorded only marginal protection for driver's knees, and the passenger's right knee, as they could have an impact with structures behind the dashboard. For child protection, it scored a 3-star rating. In the coming months, the Urban Cruiser is set to receive a major update, and it's likely that the crash testing rating score for the updated model could change. The Urban Cruiser range starts from Rs 8.5 lakh (ex-showroom, Delhi). 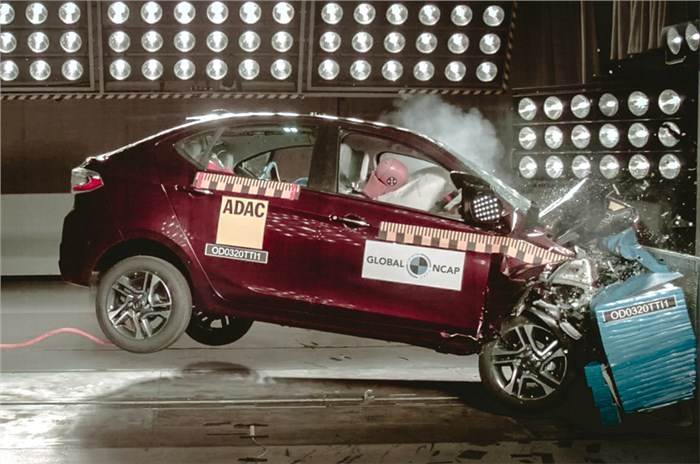 The facelifted Tiago and Tigor get an identical 4-star rating, scoring 12.52 points out of 17 for adult occupant protection. On the other hand, the Tata siblings secured a 3-star child occupant safety rating. Body shell integrity was rated unstable and not capable of withstanding further loading – with a special mention of the footwell area – though protection for the front passenger’s head and neck was rated 'good'. 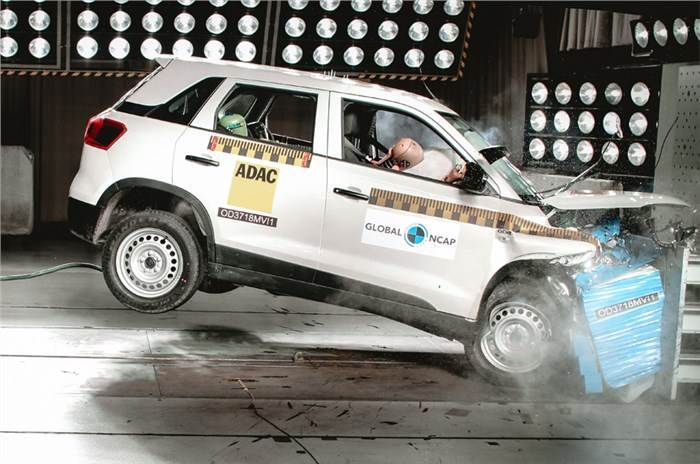 Maruti’s Vitara Brezza was tested by Global NCAP back in 2018, where it received a 4-star rating for adult protection, scoring 12.51 points. It was noted that the protection offered to the driver and passenger head and neck was good and the Brezza's bodyshell was rated as stable and with capability of withstanding further loadings. For child protection, the Maruti was awarded two stars.

But it’s worth keeping in mind that the model tested was the pre-facelift, diesel-powered unit, so the results for the current petrol model could be different. Moreover, the upcoming Brezza facelift could also become the first Maruti model to receive a 5-star rating. In an interview with Autocar India, GNCAP secretary general, Alejandro Furas, said, “The car [Brezza/Urban Cruiser] is not far away from a 5 star, there’s not much they need to do to achieve this.” The Vitara Brezza range currently starts at Rs. 7.84 lakh (ex-showroom, Delhi). 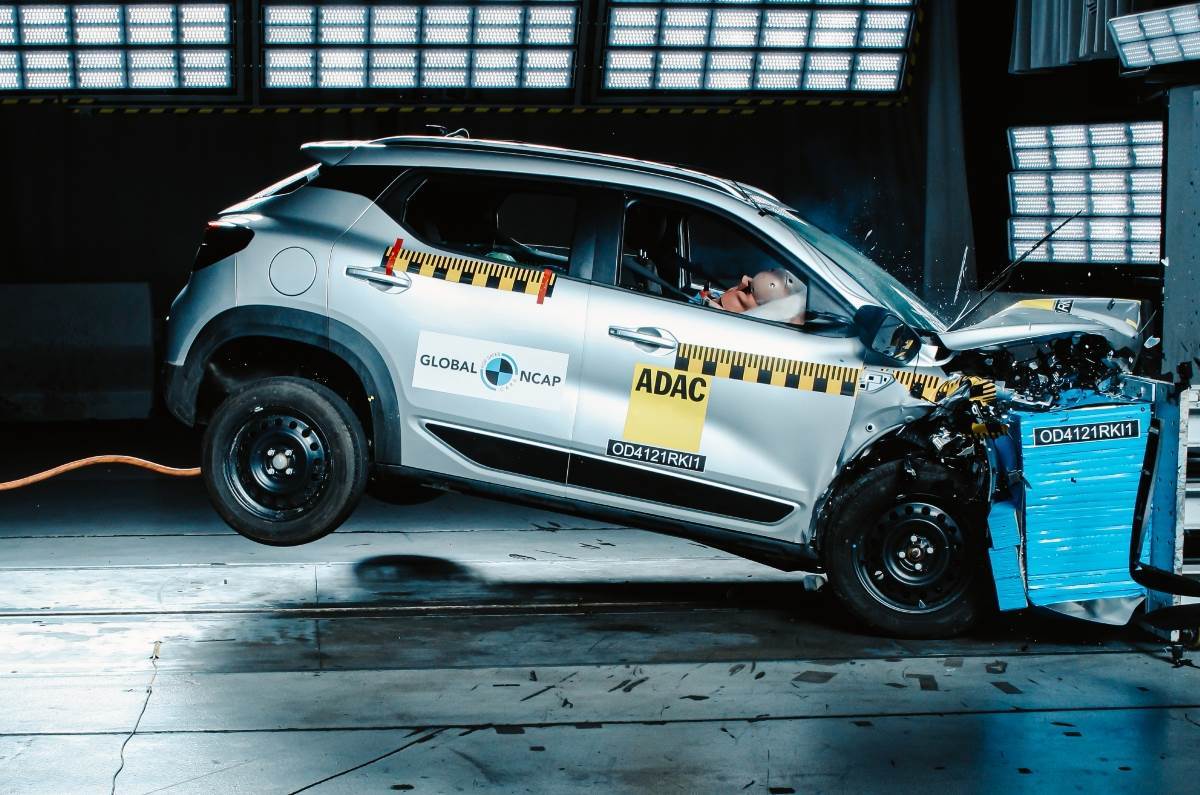 The Kiger obtained a 4-star rating, scoring 12.34 points out of 17, while in the child occupant protection test, the SUV received a 2-star rating.

The testers noted that the Kiger’s bodyshell was unstable and not capable of withstanding further load, but its footwell area was rated stable. As standard, the Kiger comes equipped with features like dual airbags, ABS with EBD and rear-parking sensors, while higher variants get four airbags. The Kiger range starts from Rs 5.84 lakh (ex-showroom, India).