We’ve compiled a list of the safest SUVs on sale in India, as rated by Global NCAP. 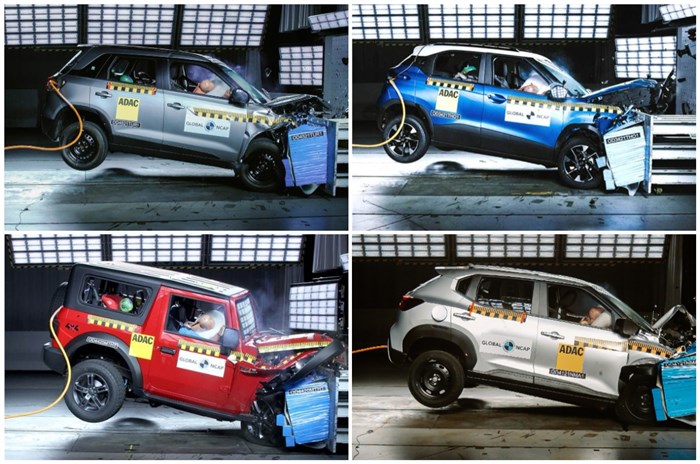 Safety in cars has been given a greater emphasis ever since Global NCAP started testing Indian cars in 2014. So far, the safety watchdog Global NCAP has crash tested over 50 cars under its ‘Safer Cars for India’ programme. Currently, there are five 5-star rated models on sale in India, with four of them being SUVs. Read on to see the Top 10 safest SUVs on sale in India, as rated by Global NCAP. 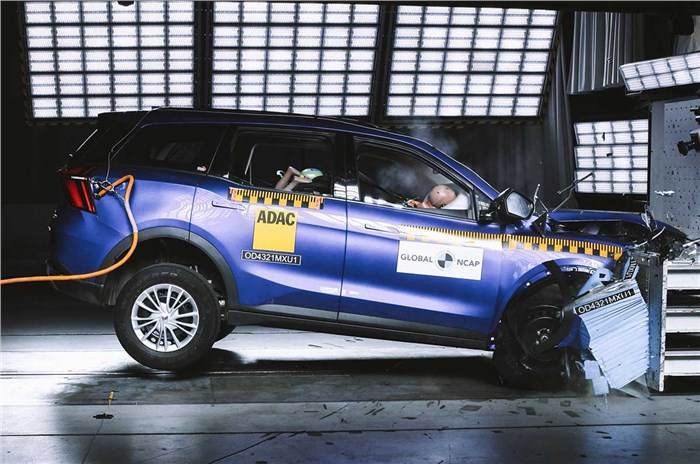 Mahindra has packed in a lot of safety tech into the XUV700, and while lower variants get only the basics, the fully loaded variants get all the bells and whistles, including seven airbags and advanced driver aids like autonomous emergency braking, adaptive cruise control and more. 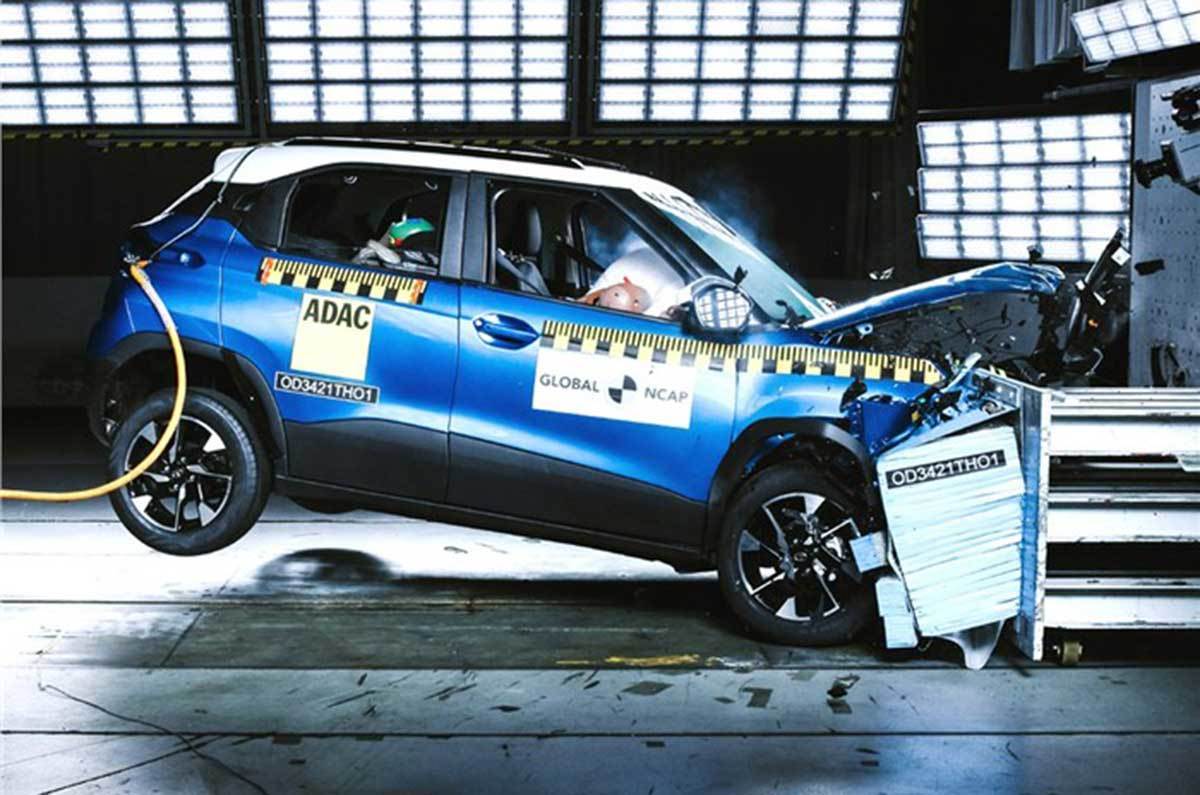 In Global NCAP’s crash tests, the Tata Punch scored 16.45 points out of a maximum of 17 (5-stars) for adult occupants, which is the highest score achieved by any car in India. Coming to child safety, the SUV earned 40.89 out of a maximum of 49 points, giving it a 4-star score in this category. The body shell of the Punch was rated as ‘stable’ and ‘capable of withstanding further loadings’. 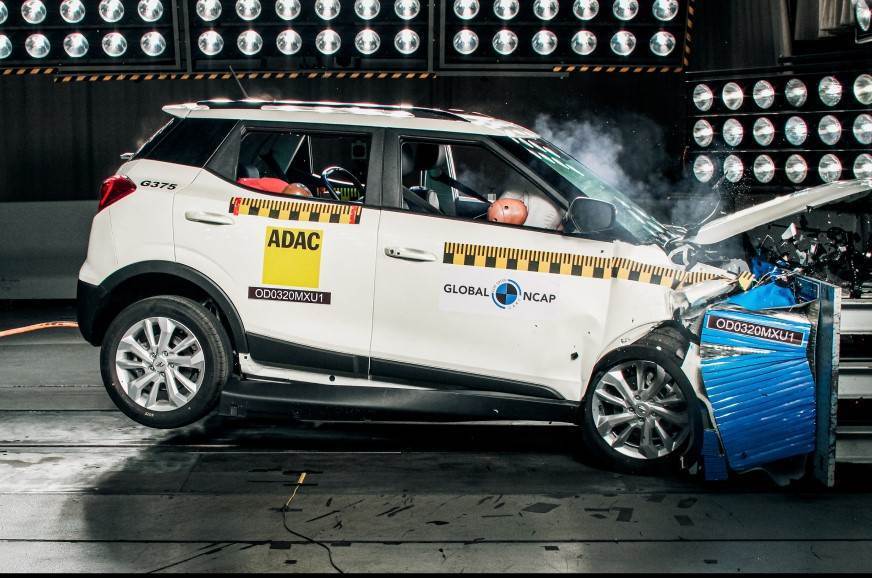 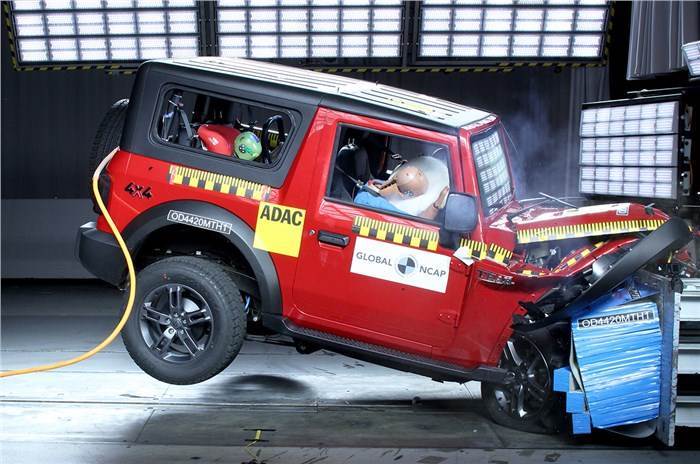 The Mahindra Thar managed to secure four stars for adult occupant protection (12.52 points). Global NCAP reported that, on impact, the Thar’s bodyshell was stable and capable of "withstanding further loadings", but its footwell area was rated unstable. The SUV fared equally well on the child occupant protection front, scoring four stars and 41.11 points out of a maximum 49.

The SUV comes with three-point seat belts as standard for all passengers, and also has standard ISOFIX child-seat mounts, which helped it secure the impressive rating. The model tested by Global NCAP was the higher-spec Mahindra Thar LX with a hardtop. 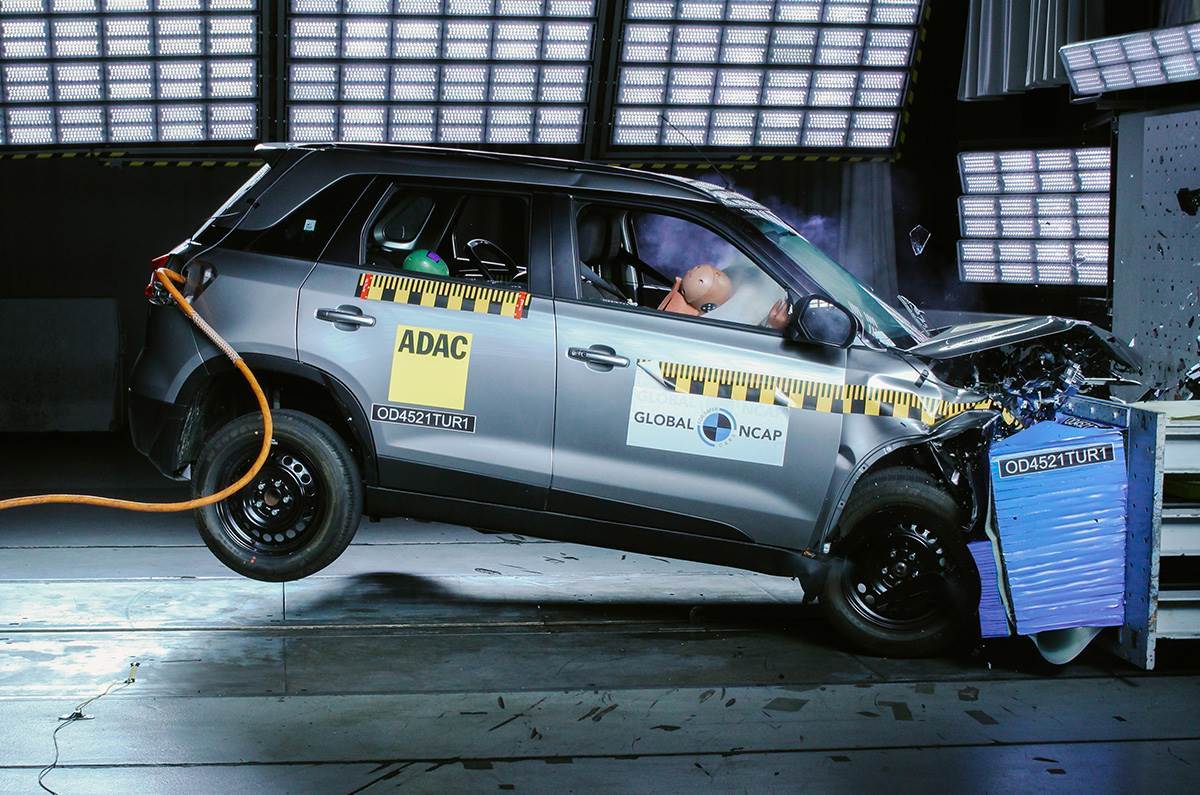 For adult occupant protection, Toyota Urban Cruiser was awarded 4 stars, scoring 13.52 points out of a possible 17. The protection offered to the driver’s and passenger’s head and neck was adjudged to be good while the bodyshell was rated as stable and capable of withstanding further loadings. In terms of child occupant protection, the compact SUV scored 3 stars, securing 36.68 points out of 49. The testers noted that the inclusion of ISOFIX child seat mounts (that are clearly marked) as standard helped the SUV’s score. 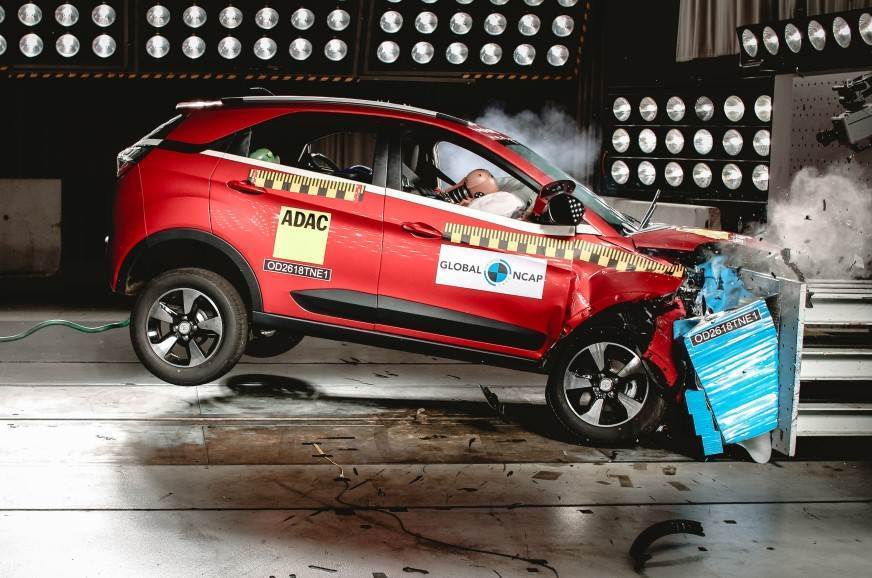 After receiving a 4-star rating initially, Tata updated the Nexon with seatbelt reminders and the SUV also passed a side-impact test which bumped its score up to 5 stars (16.06 points) for adult protection. The Nexon became the first made-in-India, sold-in-India model to register this high a score. It was adjudged to have good protection for the head and neck of the driver and passenger, and adequate protection for their chests. In terms of child occupant protection, the Nexon scored 25 points out of 49 for a 3-star rating.

However, it’s worth noting that the model tested was the pre-facelift one, with the model currently on sale further upgraded to meet pedestrian protection norms. At the time of the test, all variants of the Nexon – from the base XE to the top-spec XZ+ – got ABS and two airbags as standard, while Isofix child-seat mounts were offered only on the XZ+ and XZA+ trims. 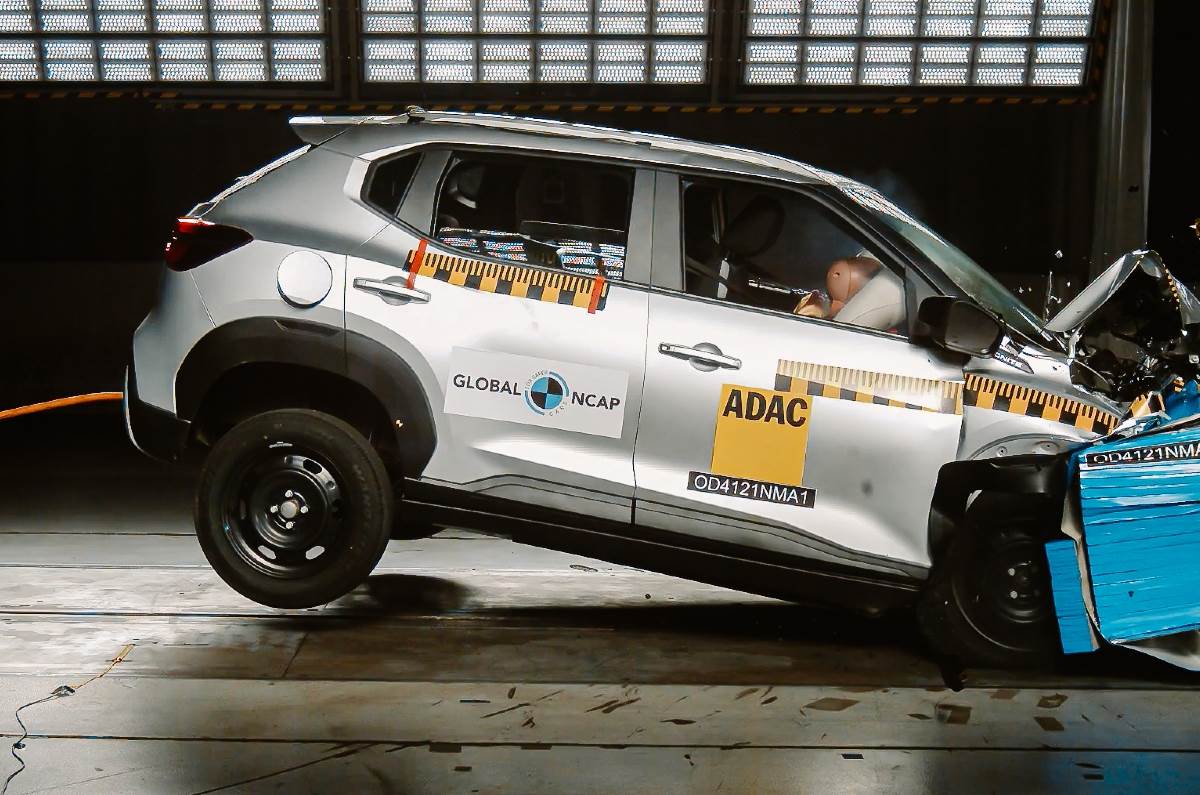 Testers rated the Magnite’s bodyshell and footwell area as stable after the crash test, though the protection provided to the driver’s chest and knees was marginal. The child occupant protection rating suffered as the base-spec Magnite tested did not have any ISOFIX anchor points for a child seat and securing them with the three-point seatbelts resulted in excessive forward movement. 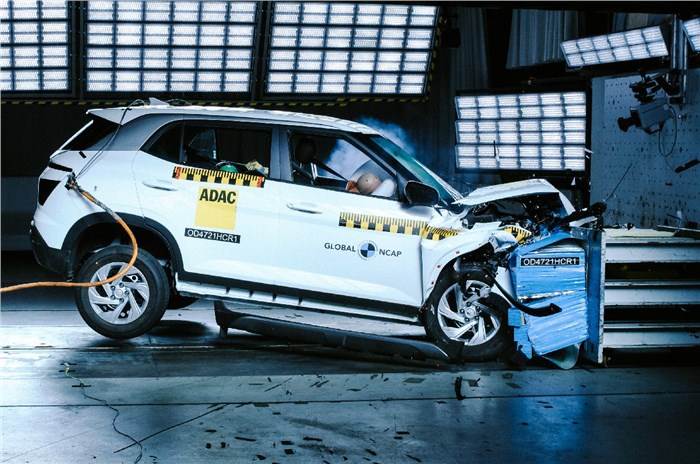 The new Hyundai Creta was tested by Global NCAP earlier this month and it managed to secure a 3-star rating for adult protection (8 points from 17). The report marks the SUV’s body shell as ‘unstable’ and not capable of ‘withstanding further loadings’. The footrest was also rated unstable. The Hyundai also secured a 3-star rating for child occupant protection, with 28.29 points out of a maximum 49. The base variant of the Creta does not get ISOFIX child seat anchorages, and hence, the child seats had to be secured with seat belts. 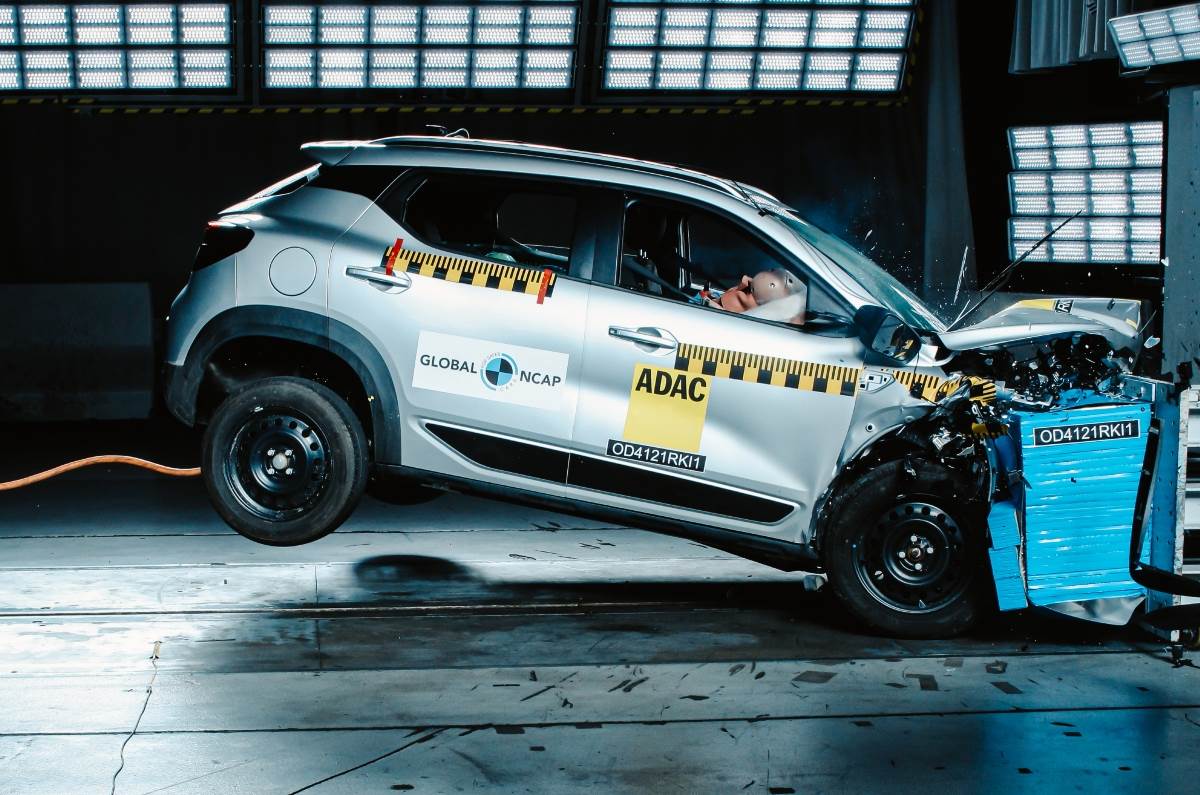 The testers noted that the Kiger’s bodyshell was unstable and not capable of withstanding further load. Its footwell area was rated stable, while the level of protection offered to adults was similar to the Magnite. Even though the Kiger has ISOFIX mounts in the rear, it ended up losing points in the child occupant protection test as they were unmarked and covered up by seat fabric, making them hidden from regular customers. Hence, the child seat was only secured by the three-point seat belt in the test, which led to excessive forward movement. 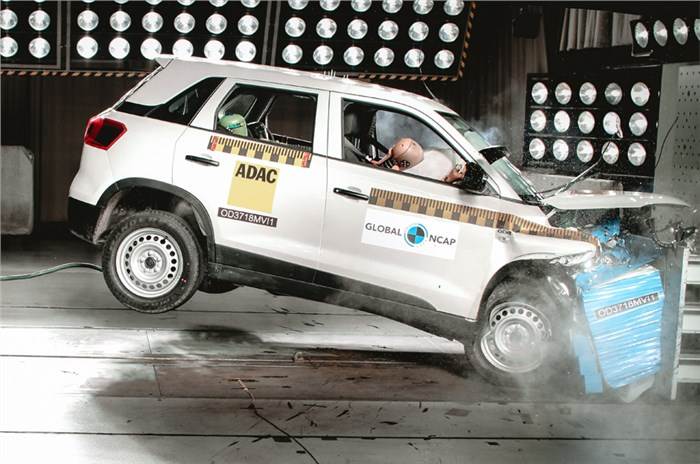 Maruti’s Vitara Brezza was tested by Global NCAP back in 2018, where it received a 4-star rating for adult protection, scoring 12.51 points. It was noted that the protection offered to the driver and passenger head and neck was good and the Brezza's bodyshell was rated as stable with capability of withstanding further loadings. For child protection, the Maruti was awarded 2 stars (17.93 points).

But, it’s worth keeping in mind that the model tested was the pre-facelift, diesel-powered model, so the results for the current petrol model could differ. Furthermore, the upcoming Brezza facelift could also become the first Maruti model to receive a 5-star rating. In an interview with Autocar India, GNCAP secretary general, Alejandro Furas, said, “The car [Brezza/Urban Cruiser] is not far away from a 5 star, there’s not much they need to do to achieve this.”