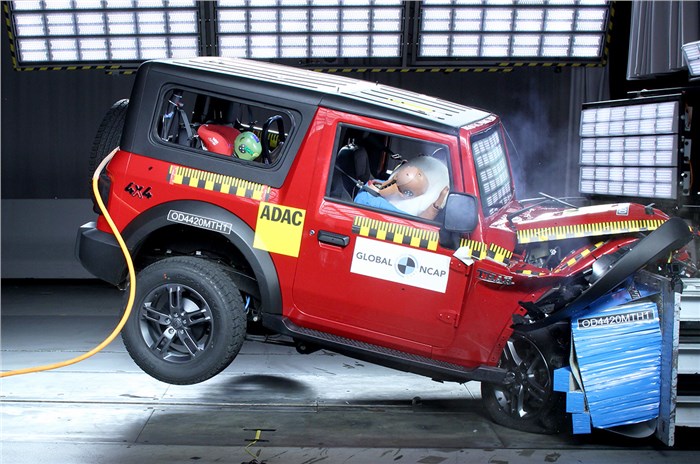 The 2020 Mahindra Thar has secured a four-star rating in the latest round of Global NCAP’s #SaferCarsForIndia crash tests.

Subject to Global NCAP’s offset frontal crash test at a speed of 64kph, the Mahindra Thar managed to secure four stars for adult occupant protection. Global NCAP’s test report states that, on impact, the Thar’s bodyshell was stable and capable of "withstanding further loadings", but its footwell area was rated unstable.

With the recommended child restraint system (CRS) for the Thar in place, movement of the three-year-old child dummy's head (sat in a forward-facing child seat) was well within Global NCAP’s 550mm limit. The Thar provided good protection for the head of the three-year-old as well as the 18-month-old child dummy (sat in a rearward-facing child seat).

In its report, Global NCAP further highlights that the Mahindra Thar comes with three-point seat belts as standard for all passengers, and also has standard ISOFIX child-seat anchorages, which helped it secure a four-star child occupant protection rating.

While Global NCAP has usually picked the base model of the vehicle in question for crash tests in the past, it appears to have used the higher-spec Mahindra Thar LX with a hardtop this time.

Like Global NCAP stated when it tested the Tata Altroz and the XUV300, most safety features are common across all variants of the new Thar, and the higher weight of the LX would’ve posed a greater challenge for it, along with its alloy rims, which are stronger than steel and would increase the impact load on the structure during the crash. With certain safety features becoming hygiene, it seems Global NCAP has dropped its usual policy of picking only the entry-level models and now chooses the variant it estimates will face the biggest challenge in the tests.

However, it’s worth noting that the Thar range included the base AX Standard and AX variants at launch, both of which aren’t on sale at this time. Both variants miss out on ISOFIX child seat mounts, 3-point seatbelts for rear passengers and even a roll cage, all of which are now being considered standard equipment with the AX Standard and AX trims missing from the lineup. The absence of these key safety features would have had a clear impact on the Thar's final crash test ratings.

Global NCAP also tested the Thar’s Electronic Stability Programme (ESP), which is offered only on the LX variant. In its test of the ESP, Global NCAP said the Thar exhibited ‘unstable dynamic behaviour’ and that a review and improvement of the Thar’s ESP are needed.

The latest result will come as another morale-booster for Mahindra, and follows hot on the heels of mixed crash test results for the Maruti Suzuki S-Presso, Hyundai Grand i10 Nios and Kia Seltos.

Are you surprised by the new Mahindra Thar’s impressive performance in the Global NCAP crash tests? Let us know in the comments.