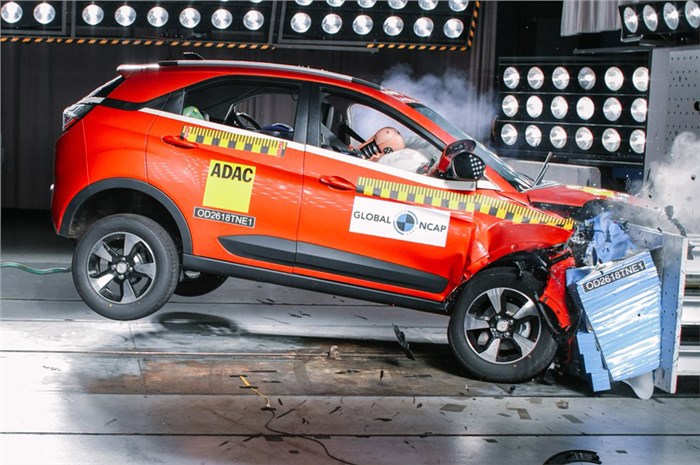 In what comes as a major fillip for Tata Motors, the Nexon compact SUV has secured a four-star adult occupant rating and a three-star child occupant rating in the Global NCAP crash tests.

What is worth noting is that all variants of the Nexon – from the base XE to the top-spec XZ+ – get ABS and two airbags as standard. The Isofix child seat anchorage is offered only on the XZ+ and XZA+ trims. In the past, another Tata that had secured a four-star Global NCAP rating was the Zest, which got it way back in 2016.

Speaking about the Nexon's performance in the crash tests, David Ward, secretary general of Global NCAP, said, “The four stars awarded to the Tata Nexon represent a very strong result from a major Indian car manufacturer. This impressive safety performance is comfortably above the new crash test standards applied in India to new models since October 2017. It is very encouraging to see Tata aiming high for safety and a great example for others to follow. The race is clearly on for India’s first five-star car.”

Also talking about the Nexon's rating, Rohit Baluja, president of the Institute of Road Traffic Education (IRTE) said, "I wish to congratulate Tata on this very good result. It shows that ‘Made in India’ and high levels of safety go together well. With excellent efforts like this from Tata and the new crash test standards now applied by the Indian Government we are going to see a steady improvement in the safety of new cars across the country and this will help to make our roads safer."

The Tata Nexon is available with petrol and diesel engine options, and a choice of manual and AMT gearboxes. Its prices start at Rs 6.15 lakh for the base petrol-manual and go all the way up to Rs 10.59 lakh for the diesel-AMT variant (both prices, ex-showroom, Delhi).

Interestingly, Maruti Suzuki’s compact SUV, the Vitara Brezza, also meets the latest Indian crash test norms, making it one of the nine models from the carmaker's current range to do so.