Toyota’s compact SUV scored 13.52 points out of 17 for adult protection and 3 stars for child protection. 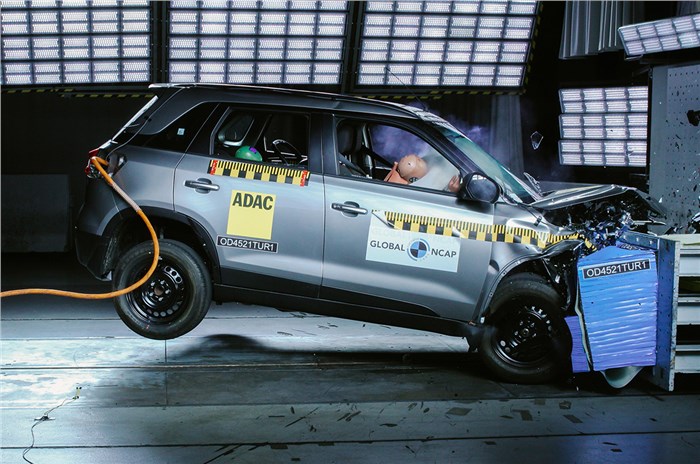 For adult occupant protection, the Toyota Urban Cruiser was awarded 4 stars, scoring 13.52 points out of a possible 17. The protection offered to the driver’s and passenger’s head and neck was adjudged to be good while the bodyshell was rated as stable and capable of withstanding further loadings. However, it was judged to have only marginal protection for the driver’s knees and the passenger’s right knee, as they could have an impact with structures behind the dashboard.

The Toyota Urban Cruiser was launched in September 2020 and is basically a badge-engineered Maruti Suzuki Vitara Brezza. The Vitara Brezza too was crash tested by Global NCAP, but that was in 2018 and the model tested was a pre-facelift version. The Vitara Brezza and the Urban Cruiser have both scored 4 stars for adult protection, but the Toyota has a better score of 13.52 points compared to the Maruti’s 12.51. Furthermore, the Urban Cruiser also significantly bettered the Brezza’s score for child protection, scoring 36.68 points for a 3-star rating, while the Maruti scored 17.93 points for a 2-star rating.

Apart from the Brezza, it rivals other compact SUVs like the Tata Nexon, Hyundai Venue, Kia Sonet, Mahindra XUV300, Renault Kiger and Nissan Magnite in the market. Out of all these competitors, it’s only the Tata Nexon and Mahindra XUV300 that have scored the full 5 stars in the tests, with the latter having a marginally better score for adult protection.

Global NCAP had also crash tested the Nissan Magnite and Renault Kiger, as part of its last round. Much like the Urban Cruiser, both the Magnite and Kiger were awarded a 4-star rating for adult protection. However, the Toyota (13.52) has managed to outscore both its rivals (Magnite: 11.85, Kiger: 12.34) in terms of points.

While an increasing number of Indian-made vehicles have done well in Global NCAP’s crash tests recently, it must be noted that the watchdog currently only assesses cars for crash safety (passive). However, this is set to change, with greater emphasis being given to crash avoidance (active).

As we had reported, the GNCAP testing will become a lot tougher from this year – 2022 will see ESC being introduced as a requirement, and the side impact test and pedestrian protection test is also set to become standard procedure.

What do you make of the Toyota Urban Cruiser’s results in the GNCAP tests? Let us know in the comments.