There’s a lot of misinformation about the Global NCAP crash tests and the ratings. We clear the air. 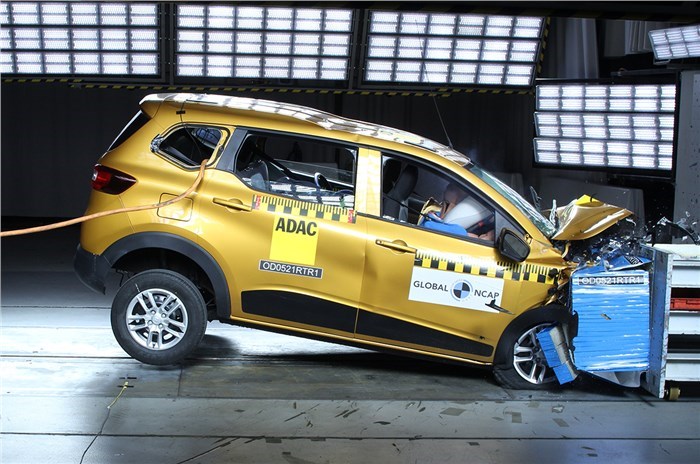 Tata's recently-launched Punch made headlines last week, achieving a 5-star rating in Global NCAP's crash tests. The micro SUV scored 16.45 points, out of a maximum of 17, for adult occupants which is the highest score achieved by any car in India, even more than the Tata Altroz and Mahindra XUV300.

You can, at least in part, credit Global NCAP’s crash tests for being the genesis of the automotive safety movement in India. Released in January 2014, the results of the very first crash tests by the agency on five made-in-India and made-for-India cars made headlines nationwide and brought the topic of automotive safety to the fore. The results were a wake-up call for all stakeholders. And there has been progress since. The government that had long dragged its feet on safety, among other initiatives, introduced far superior crash test requirements; many carmakers have incorporated safety features such as airbags well before they’ve been mandated by law and buyers simply want safer cars.

While the results have reached far and wide (God bless the internet), a look at online forums and social media chatter also suggests there’s a lot of misinformation about the crash tests. So, it’s a time as good as any to break it right down.

What is Global NCAP?

NCAP stands for New Car Assessment Program. To give a brief background, in 1978 USA became the first country to come up with a programme to provide car crashworthiness information to consumers, which eventually expanded to crash testing and reporting the results. The US-NCAP model formed the basis for similar programmes in other regions, and today there is the Australasian NCAP, Euro NCAP, Japan NCAP, ASEAN NCAP, China NCAP, Korean NCAP and Latin NCAP. Global NCAP, an independent charity registered in the UK, was formed in 2011 to enhance cooperation between the various NCAPs and primarily promote vehicle crash-testing and reporting in emerging markets. ‘Safer Cars For India’ and ‘Safer Cars For Africa’ are its key initiatives at the moment.

How does Global NCAP crash-test cars?

Every NCAP has its own protocol to crash-test and score cars, and so the results are not interchangeable. Euro NCAP, for instance, conducts full frontal, front offset, side impact and side pole tests. Global NCAP ratings, on the other hand, are based on front offset crash tests alone. A front offset crash test is designed to simulate a head-on collision between two cars. In the Global NCAP test, the car is driven at 64kph and with 40 percent overlap into a deformable barrier which is the equivalent of a crash between two cars of the same weight, both moving at 50kph.

A key point to bring in here is the difference in speed of the front offset test conducted by Global NCAP and Indian regulatory authorities. As per the Indian government’s latest safety norms (applicable to all new models since October 2017, and to all models on sale from October 2019), to be eligible for sale, a car must meet front offset and side impact crash requirements. The Indian government’s front offset test is conducted at 56kph which, though lower than the Global NCAP’s front offset crash test speed, is in line with the United Nations’ Regulation 94 for front impact protection. By extension, and this is important to note, it is possible for a car to meet latest Indian regulations and, hence be eligible for sale, and yet be rated poorly by Global NCAP. So, there is truth to a manufacturer’s press release after a poor showing in a Global NCAP test that the car in question ‘meets all regulations’. NCAP’s requirements for a good score are often superior to minimum regulatory requirements. Also, note, NCAP protocols change every couple of years to include more tests or features.

How does Global NCAP score cars?

Technically, a car cannot ‘fail’ an NCAP test, as it can a government regulation test. Each car under the NCAP, as you may be familiar, is given a rating on a 5-star scale – the higher the star rating, the safer the car. The rating itself is based on the Adult Occupant Protection and Child Occupant Protection scores resulting from the crash test. These scores are primarily derived from readings of the crash-test dummies but additional points may be awarded for the presence of certain safety features. Additionally, Global NCAP mandates a driver’s side airbag as the minimum requirement to qualify for a one star rating. This should explain why non-airbag versions of the Tata Zest and Volkswagen Polo received zero stars, while airbag-equipped versions tested later were rated 4-star cars. In time, more requirements will be introduced too. For instance, ESC  could become a minimum star requirement in the tests on Indian cars in the years to come.

The 17-point Adult Occupant Protection score takes into account driver injury readings from four body regions – head and neck; chest; knee, femur and pelvis, and leg and foot. An additional point is given to cars with a seatbelt reminder, four-channel ABS and some form of side-impact protection, tested by a relevant authority.

The primary basis for the 49- point Child Occupant Protection score is readings from the 18- month-old and 3-year-old-sized dummies placed in manufacturer-recommended child seats. Additional points are given for child restraint system markings, provision of three point seat belts, Isofix, etc.

How does Global NCAP select cars for test?

Mass market models have been the point of focus in the Safer Cars For India initiative. The cars to be tested are bought by the agency from a showroom. Global NCAP uses cars in base trim for the test and the idea is to establish a baseline level of safety a buyer gets even on the most affordable version of a car. Carmakers, however, are allowed and encouraged to send an improved or higher-spec car with more safety features for an additional crash test and rating too. The Tata Zest, Volkswagen Polo and Honda Mobilio have been tested twice, while the Renault Kwid has been tested four times since 2016. In the event a manufacturer is providing a test car, the model is selected straight off the assembly line by Global NCAP as per a strict internal protocol. So far, Global NCAP has conducted 35 crash tests of 27 Indian cars. (See table).

When will all cars have a crash test rating?

As things stand, not any time soon. Global NCAP, as an independent body, has limited resources to conduct crash tests on each and every car. However, the broad goal is to create awareness among buyers on safe cars that would translate into a demand for a safety rating. Just for reference, USA mandates a crash worthiness rating label on cars for sale. On the other hand, an NCAP rating is not mandatory in Europe but its absence is viewed as suspect by buyers, explaining why 80 percent of new models are sent for a Euro NCAP rating by the manufacturers themselves. A good safety rating is good for business.

The establishment of an India-specific Bharat NCAP (later expanded in scope to BNVSAP or Bharat New Vehicle Assessment Program) has been spoken of since the time of the first Global NCAP crash tests in 2014 but nothing concrete has come of it as yet. India now even has the facilities to conduct the said crash tests so hopefully it’s a matter of time before industry bodies come together to make the program come alive. A crash test rating for all cars would put an end to often unfounded arguments for or against a model’s crash worthiness and would equip buyers with objective information to buy safe. What’s encouraging for us in India is that carmakers have, of their own will, started inviting Global NCAP to test their cars. A good safety rating becomes a key product differentiator. And that can only be good news for manufacturers and buyers alike.

NCAP tests to get tougher from 2022

Even though an increasing number of Indian vehicles have done well in GNCAP’s crash tests recently, it must be remembered that the watchdog only assesses them for (passive) crash safety for now. However, this is set to change in the coming years, with greater consideration being given to (active) crash avoidance.

As we have already reported, the GNCAP testing will become a lot tougher from next year. 2022 will see ESC being introduced as a requirement for achieving higher ratings, and the side impact test is also set to become standard procedure. Come 2026, GNCAP will overhaul its testing protocol, giving a single star rating (instead of the current system of separate ratings for adult and child occupants) and including assessments for more active safety tech. 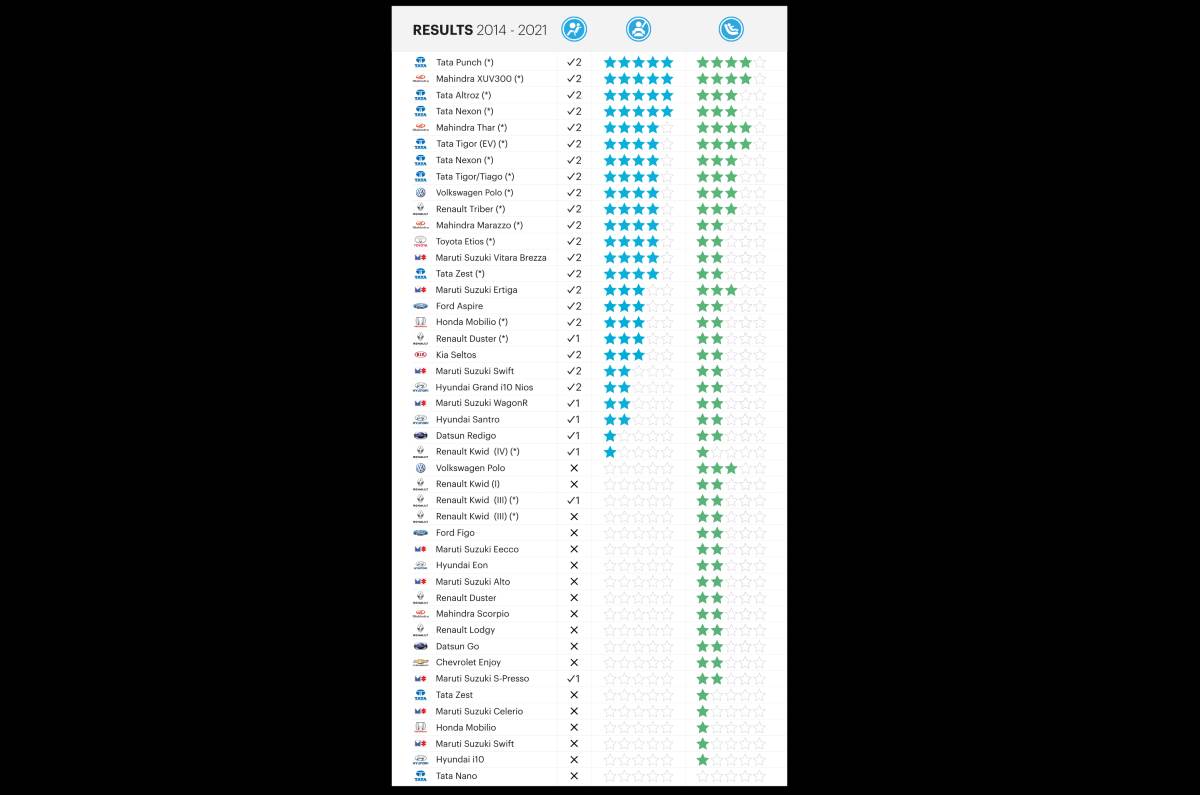 Your articles are very informative.

Your articles are very informative.