In the latest round of Global NCAP crash tests, the MPV got a 4-star rating in the adult occupant protection category. 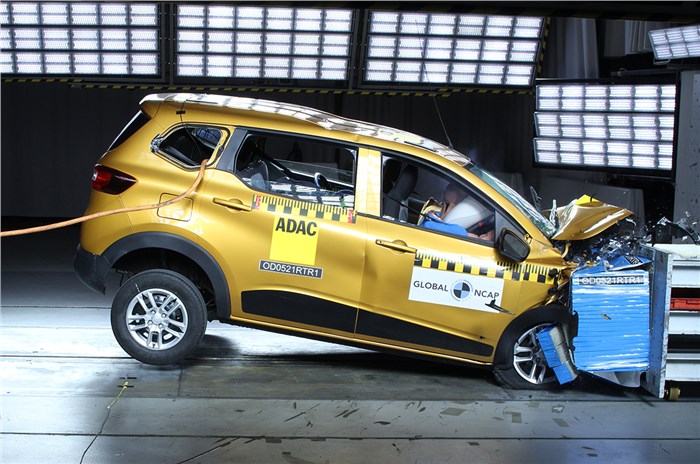 The Renault Triber has received a four-star safety rating in the adult occupant protection category from Global NCAP. This latest round of tests has been conducted under the #SaferCarsForIndia campaign.

The bodyshell of the MPV was rated unstable as it was not deemed capable of withstanding any further loads. However, the footwell area on the other hand was rated stable.

In the child occupant protection category, the Triber didn’t score as well, given that it received a three-star rating and scored 27 out of a possible 49 points. For this category, the tests were performed with both a forward facing (FWF) child seat and a rear facing (RWF) child seat. The child seat for the three-year-old was installed FWF with the adult three-point seatbelt fastening it. This was not able to reduce excessive forward movement during the impact. Hence, the protection provided to the chest was only rated average and the head protection was low (as it was exposed during the crash).

The RWF child seats were used for the 18-month-old test dummy. The child seat in conjunction with the adult seatbelt offered full protection to the child occupant. It is also worth noting, that while the Triber allows for the installation for a child seat at the rear, it does not offer ISOFIX anchorages.

David Ward, President of the Global NCAP said, "It is satisfying to note Renault’s safety improvements with Global NCAP’s Triber crash test result. We would encourage them to continue this progress, and to set a five star or Safer Choice rating as their future target for the Indian market.”

According to the GNCAP release, the Renault Triber used in this round of tests came with the most basic safety specification. This means the model tested came equipped with two airbags, a seatbelt reminder system and ABS.

Mechanically, the Triber tested here came fitted with the 72hp, 1.0-litre, three-cylinder naturally aspirated petrol engine and a 5-speed manual gearbox. However, in our market, Renault also offers the Triber with a 5-speed AMT automatic gearbox.

Going forward, Global NCAP test are set to get tougher as it is set to introduce more testing parameters in order to increase the safety standards. From 2022 itself, ESC (electronic stability control) test will join the organisation’s test protocols. Furthermore, it plans to incorporate more active safety technology in its testing protocol as well as introduce a single rating (instead of separate adult and child safety ratings) by 2026.