New flagship SUV from Tata will sit above the five-seat Harrier; launch late 2019. 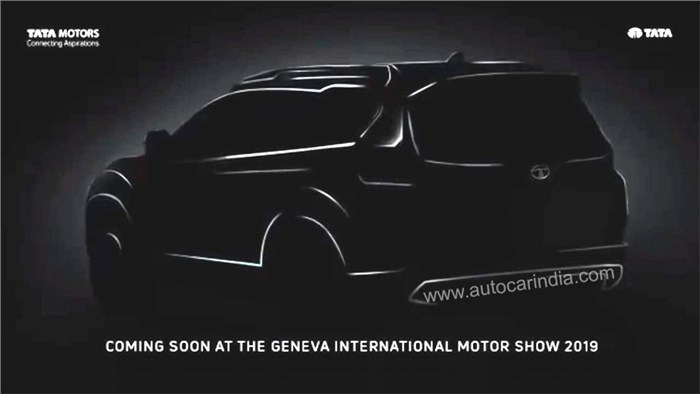 Tata Motors has released a first teaser for its upcoming H7X SUV that will make its public debut at 2019 Geneva motor show next week. The H7X is, in essence, the 7-seat version of the Harrier and will be known by a different name.

The teaser is a rear three-quarter silhouette of the H7X. What's clearly visible is a more upright tail gate, something made clear by spy pics of the production model. The H7X will share its wheelbase length with the Harrier but will be 62mm longer overall to accommodate the third row of seats. Larger 18-inch wheels, footboards and roof rails are other elements seen on the test mule. Styling at the front could be slightly different from the Tata Harrier's as well.

The H7X will also go one up on the Harrier with a more powerful (near 170hp) version of the Kryotec diesel engine and the option of a Hyundai-sourced 6-speed automatic transmission. The engine and gearbox will be rolled out on the Harrier too.

The production version of the Tata H7X will go on sale towards the end of 2019 and will be priced at a premium over the Harrier.

The Tata H7X will be joined by the Altroz and two offerings from Tata Motors – the Hornbill micro-SUV concept and a 45X-based EV hatchback at the 89th edition of the Geneva motor show.