The Baleno facelift gets major styling changes inside out and is expected to continue with the same 1.2-litre petrol engine. 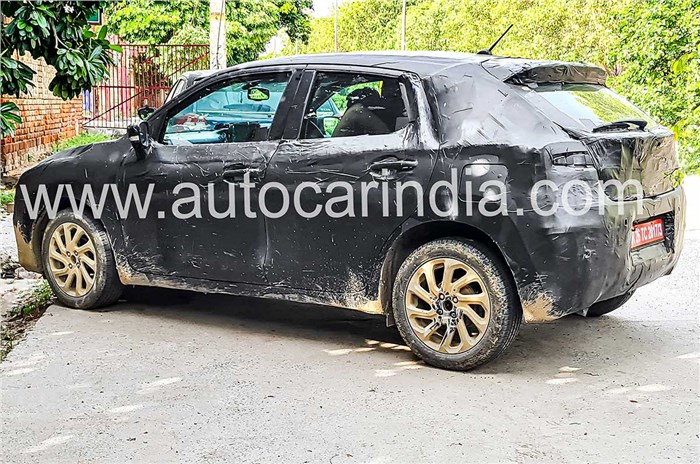 Maruti Suzuki’s next major unveil, the 2022 Baleno, has been leaked ahead of its world premiere slated to take place sometime next year. The first set of shots that have been sent to us by a reader reveal the Baleno facelift’s final design and also the new styling direction that will be seen on future Maruti Suzuki models.

2022 Maruti Suzuki Baleno: what do the leaked images reveal?

As reported by us earlier, the model we see in these leaked images looks more of a major update to the current Baleno than a full model change. Almost all body panels of the 2022 Baleno seem to have been redesigned and when seen from upfront, the car looks wider than than its predecessor. Firstly, do note that the leaked images seem to be of a lower-spec model which is why it has more black plastic visible instead of chrome bits that will be seen on the higher variants. The car seems to not have fog lamps or a wiper or washer for the rear windshield.

Coming to the styling bits, the new Baleno gets L-shaped wraparound headlamps that will get LED daytime running lamps and projector set-up depending on variant. The hood seems to be flatter, but continues with its clamshell design. The newly designed grille has a “smiley look” and is now much larger. It also gets a faux brushed aluminum outline that extends from its sides and merges neatly with the headlamps, again adding to the car’s wider and planted stance. The front bumper has a wide air dam with contrast black plastic inserts and two separate compartments for the fog lamp units at each corner.

While the side profile of the new Baleno is not revealed, the design of the new car, as reported by us earlier, will be more or less similar to the one that is on sale currently.  At the back, the 2022 Baleno gets a new tailgate design, new L-shaped tail lamps that now extend all the way to the tailgate and a new bumper.

2022 Maruti Suzuki Baleno: Interior to be revamped as well

Spy shots from a few weeks ago confirmed an all-new interior for the Hyundai i20 rival. The 2022 Baleno will get a completely redesigned dashboard, with the AC vents now placed horizontally in a V-shaped pattern and a free-standing infotainment screen taking centre stage. The unit looks much bigger than the 7.0-inch SmartPlay Studio system and could easily be 8.0-inch or more in size.

Sources have confirmed to us that the infotainment system will be upgraded and will also feature wireless Apple CarPlay and Android Auto, among others. The steering wheel will be similar to the one used on the Swift. The climate control switches are also expected to be all-new and will look similar to the ones on the Ignis.

2022 Maruti Suzuki Baleno: will it see any mechanical changes?

We don’t expect the Baleno to see any tweaks under the hood. The Baleno is currently powered by two 1.2-litre petrol engines – one producing 83hp and another producing 90hp with 12V mild-hybrid technology – and these are expected to be carried over as is. There are talks of a full-hybrid version of the car; however, we don't expect it to be introduced with this update.

While the Baleno continues to be one of the most popular cars sold in India, the model has seen rivalry from newer products from Tata and Hyundai that come with more creature comforts and better technology.

Toyota Glanza and its international twin, the Starlet, are built alongside the Baleno at the Maruti Suzuki plants in India. Given the fact that all three models share parts, we expect Toyota to also update its Baleno-based models subsequently in the near future.