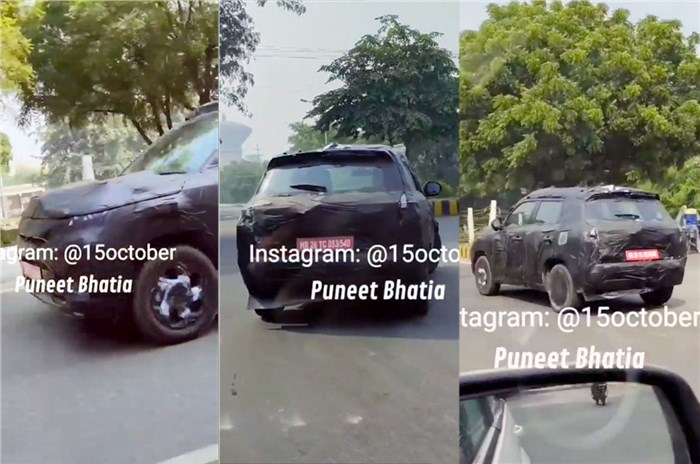 Maruti Suzuki has begun road-testing the heavily updated Vitara Brezza SUV that is expected to see a debut sometime in mid-2022. The refreshed Vitara Brezza will be one of many models from Maruti Suzuki that will be updated next year. This development goes in line with our July 2021 story about Maruti readying a slew of updates to its Indian model range. Apart from the Vitara Brezza, Maruti Suzuki is also readying an updated Baleno and an all-new Alto hatchback.

2022 Maruti Suzuki Vitara Brezza: what does the test-mule reveal?

The current Vitara Brezza has been on sale since early 2016 and while Maruti gave it a minor cosmetic update in 2020 (along with a switch to petrol engine), the SUV looks dated now and is almost a generation old when compared to the newer models like the Kia Sonet, Hyundai Venue, the Nissan Magnite and the Renault Kiger. The updated Vitara Brezza seen in these spy shots will stick to the tried and tested formula of an upright, somewhat boxy design, but with newer styling cues that will bring it in line with newer and upcoming Maruti Suzuki models.

Sources tell us that the Vitara Brezza will continue to sit on the same Suzuki Global C platform as the outgoing model. The SUV was tested by Global NCAP in 2018 and holds a four-star crash test rating.

The camouflaged test mule does not reveal much of the exterior. What can be confirmed, however, is that the doors and the roofline look identical to the current SUV. Apart from the doors, almost every other body panel is expected to be redesigned including the front and rear bumpers and grille. What can also be confirmed is the placement of the license plate which is much lower than the current model.

While details on the interior are scarce, what can be predicted is that the updated Vitara Brezza will, just like its predecessor, see a lot of part sharing with newer Maruti Suzuki models – like the 2022 Baleno which is also being readied for a market launch. Shared bits can include front seats, switchgear, steering wheel and even the updated infotainment system that was spotted on the Baleno test-mule recently.

Under the hood, we don’t expect any major surprise as sources tell us that the 1.5-litre petrol engine that made its debut in the 2020 Vitara Brezza is expected to soldier on, mated to either a five-speed manual or a four-speed torque convertor automatic gearbox.

As far as rivals go, the new Vitara Brezza will continue to take on the likes of the Hyundai Venue (also due for a facelift next year), the Kia Sonet, Tata Nexon, Renault Kiger and the Nissan Magnite.