MG Motor’s second car in India will be another SUV. What’s different, however, is that it will be an electric. We get an exclusive drive of the test mule outside the MG plant in Halol. 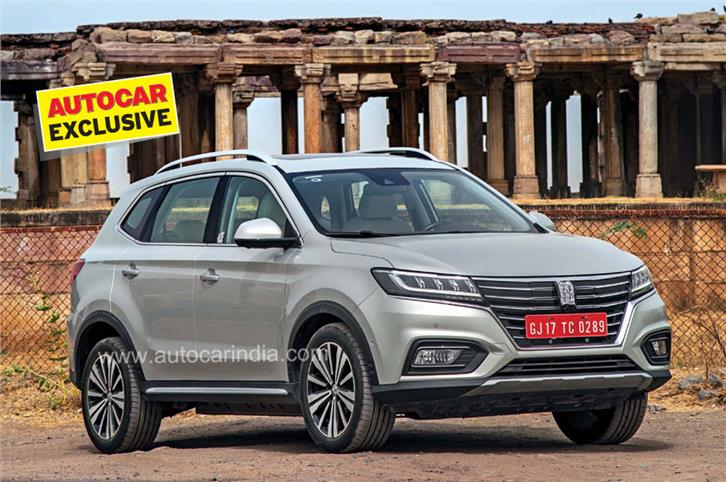 Look closely and you can see the battery sticking out below the floor of the mule. 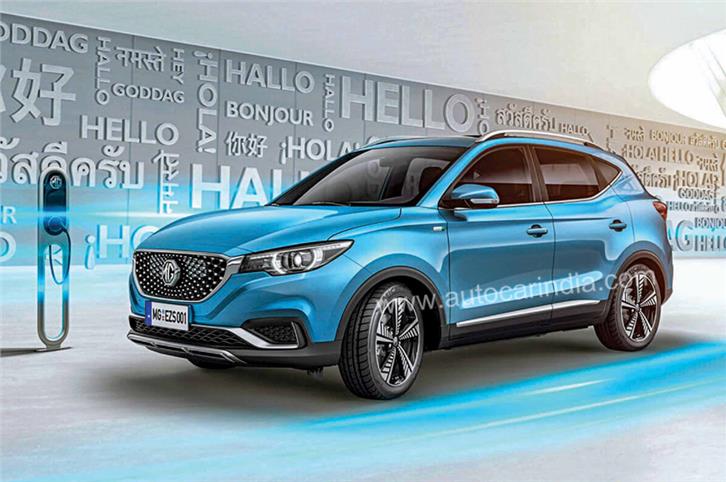 MG has just revealed the eZS ; it’s likely to get a larger 45kWh battery in India.

One of the few carmakers to announce concrete plans for an electric car in India has been MG. The car in question is the recently showcased eZS, the electric version of the ZS, and the news is that it will go on sale soon after the Hector. The test car isn’t in India yet, but MG is already testing its electric drivetrain on a test mule. And the electric motor and battery system are almost identical to SAIC’s Roewe RX5 – the car I’m driving today. 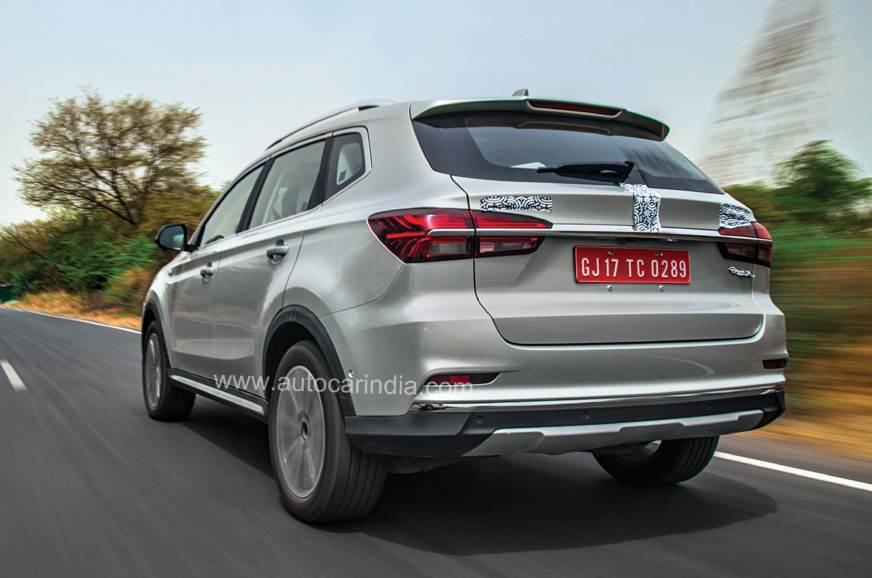 With 148hp and loads of torque, highway performance is quite good.

The RX5 is a bit heavier than the more sporty MG ZS. Apart from that, the performance and drive should be similar. But what electric components we are talking of here? Well, to begin with, the E-RX5 comes fitted with a flat 35KWh battery. Placed under the floor and between the wheels, the battery is actually visible if you look under the car. This is because this isn’t a dedicated EV platform, so space has to be used creatively. The underslung battery gets a stronger casing to protect it from ground strikes and our ambient temperatures. It’s liquid-cooled to help it perform optimally in hot conditions; the climate control system uses a water-based coolant to achieve this. The liquid supplied, however, is specially treated to make it a poor conductor of electricity by battery supplier Contemporary Amperex Technology Ltd. (CATL) – currently China’s largest battery maker. This electric architecture also gets driver adjustable and three-stage energy recuperation; MG and SAIC call the system KERS, or Kinetic Energy Recovery System, like in F1. And what drives the front wheels from under the bonnet is a 110kW (or 148hp) three-phase permanent magnet traction motor. 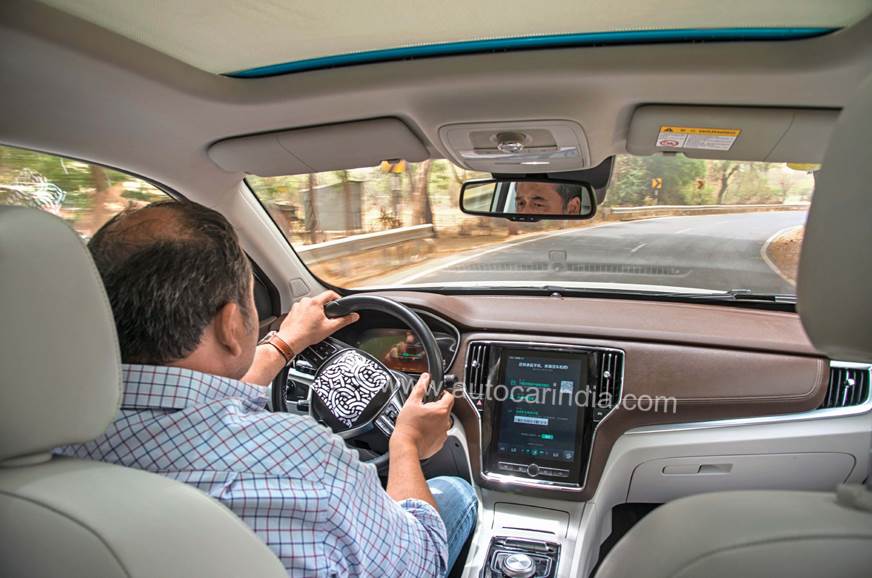 It feels effortless and relaxing to drive.

Heading out into traffic from MG’s plant at Halol in the left-hand-drive test mule feels a bit disorienting at first. It isn’t just the fact that I’m seated on the wrong side of the car – driving a left-hooker in India is something I’ve done a number of times, but this is an EV, so it does feel strange. What gets my attention right away is that the electric motor is extremely well-metered in traffic and near-seamless to drive. The RX doesn’t feel over-aggressive when you hit the throttle, as EVs often do, and nor does the accelerator pedal feel dead when you move it a small amount, as it does on a Mahindra e2o. And then the best bit is that when you want more power, it is delivered at just the right time. As we move to more open roads that lead out of Halol, I switch to Sport mode. And here too, I marvel at how well the electric motor and power delivery is metered. Yes, there is a lot more in the pedal now and torque delivery has increased a lot as well, but again, it doesn’t feel over-responsive; there’s no massive dump of torque happening at the front wheels; and that feels nice. Pulling power, however, is more than sufficient. I’m a bit careful when overtaking cars, as I have to start from way back (because it’s a left-hand drive), but once the road ahead is clear, the electric RX5 dispatches its victim with great efficiency.

Looking for a place to shoot we come upon a small hillock that has a path leading up. The climb is steep and, with only front-wheel drive, I initially hesitate. The MG engineer riding shotgun, however, says I should give it a go. Not needing more encouragement, I start with a good amount throttle – and then step it up as the angle of inclination increases. The going gets harder once it gets steeper, but the eRX5 has so much torque, it climbs effortlessly – almost like it has a big powerful V6 under the hood.

MG still isn’t sure if it will maintain this state of tune on the eZS; the latter is a sportier SUV in comparison, and that could mean more aggressive responses are needed. However, even as things stand, this electrical architecture seems to be well up to the task. And having driven a petrol version of the MG ZS, I can tell you it is impressively put together on the inside, comfortable being driven through corners at a fair rate and it even rides decently. So this combination should work well too. 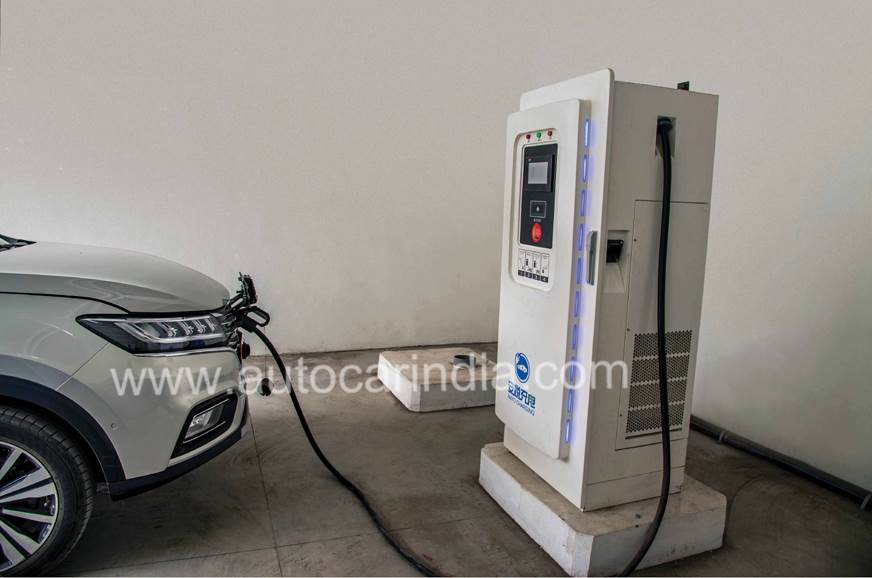 30.94kW from a DC quick charger can top-up an empty battery in a little more than an hour.

We end our drive using the DC quick charger at MG’s R&D centre that puts out an impressive 30.9kW. Fans whirring to keep the charging station cool, while the charger demonstrates how effective a quick charge at lunchtime can be, and what’s good is that MG plans to install at least one in every dealership. 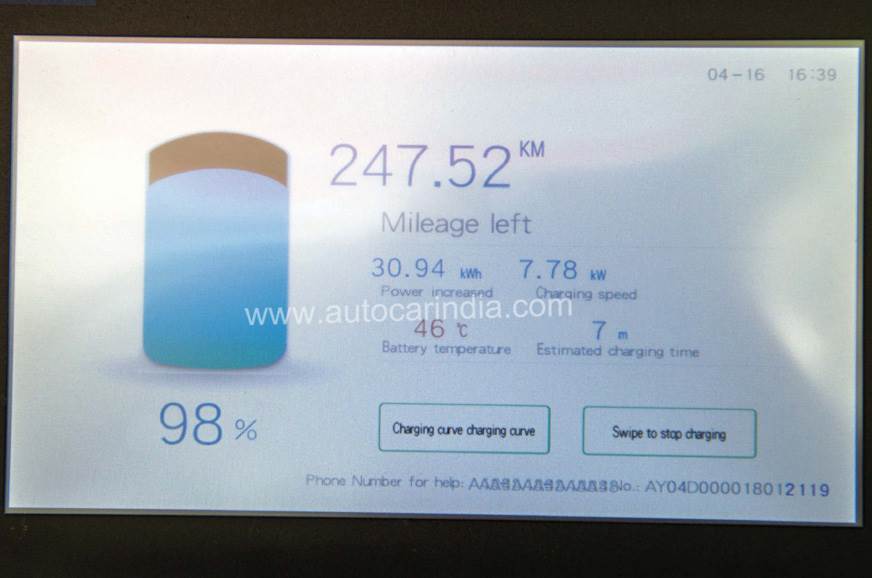 When it brings the eZS to India sometime after Diwali, MG plans to assemble it as well as the 18-module battery pack in India. Expected to be priced somewhere around Rs 25 lakh, the car is likely to come with a larger 45KWh battery, and MG plans to provide chargers – and even help install them – at the homes of owners. A killer price and some important kit should get the ball rolling for MG. Our charging infrastructure couldn’t come a day too soon.