Toyota has also opened its first regional stockyard in the country to facilitate vehicle deliveries in the Northeast region. 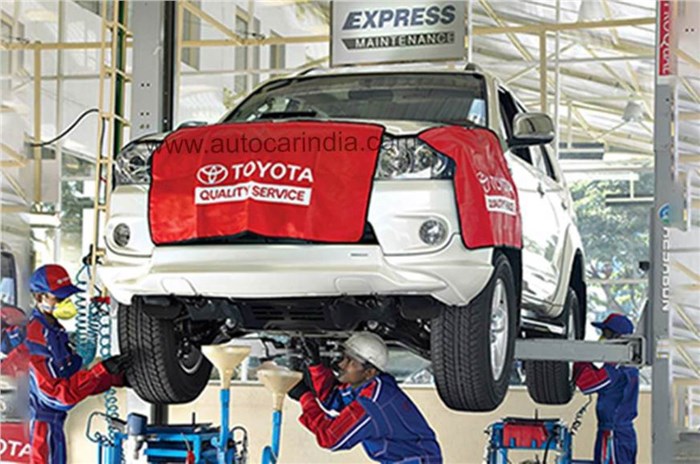 Toyota has increased its service coverage across smaller towns and cities by launching 87 service locations in the country. Dubbed ‘Pro Service’ centres, the outlets have been opened in areas which did not have authorised Toyota service touchpoints earlier.

Moreover, the company has also set up a regional stockyard in the Northeast, to facilitate vehicle deliveries in the region.

Toyota’s Pro Service centres mark the first time that the carmaker has tied up with dealer partners in India for exclusively catering to customer service requirements, without having corresponding vehicle sales operations. The outlets have been opened in Narnaul (Haryana), Nagaur (Rajasthan), Jorhat (Assam), Kharagpur and Asansol (West Bengal), Morbi, Patan and Palanpur (Gujarat), among other locations.

Commenting on the initiative, Naveen Soni, Senior Vice President, Sales and Service, Toyota Kirloskar Motor, said, “There was an emerging business need for service operations in smaller cities and towns, owing to the increasing number of Toyota car owners. We have carefully selected the new locations, looking at cities and towns that have seen a rise in Toyota car owners, to ensure service to our customers closer to their homes.”

The Pro Service centres are equipped to cater to Toyota’s complete range of vehicles and provide free services, regular periodic maintenance, minor general repairs and minor body and paint repairs. Toyota says that the outlets will receive parts supply, in addition to technical and operational support and training for the entire staff, directly from the company.

Notably, however, the Pro Service workshops are also permitted to service vehicles from brands other than Toyota.

Toyota has also announced the launch of its first regional stockyard in India. Set up in Guwahati, Assam, the facility is aimed at supplementing the 13 customer touchpoints in the Northeast region by reducing the vehicle delivery time for customers “from the current 13 days to a maximum of two days for furthermost dealers in the Northeast states”.

The company says that it has been witnessing growing demand from the area over the years and that its latest move should improve customer satisfaction, especially during the festive season which is expected to witness relatively higher passenger vehicle sales.

Toyota currently has 396 outlets and 79 dealer partners across India. With the launch of the Urban Cruiser and Glanza, Toyota is aiming to increase its market penetration and is in the process of opening new sales and service touchpoints in Tier-III and Tier-IV cities, particularly in central India and the Northeast region. The move should help prime the company’s network for upcoming products from its partnership with Suzuki.