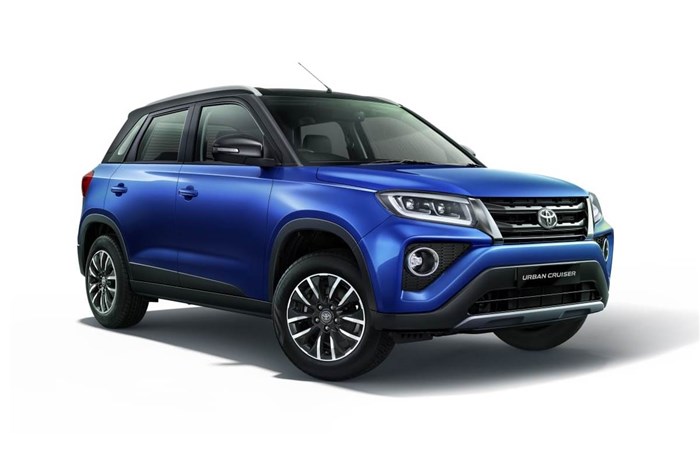 Expected sales volume from the compact SUV has also prompted the carmaker to expand its presence in rural townships by adding 50-plus outlets.

The Toyota Urban Cruiser is the second product to come out of the partnership between Toyota and Suzuki in India, following the Glanza hatchback that was launched last year. With the Vitara Brezza-based Urban Cruiser marking Toyota's foray into the compact SUV category, the carmaker is not only aiming to cater to a new segment of buyers, but will also serve new markets in the country in a bid to increase its market penetration.

Priced at Rs 8.40-11.30 lakh (ex-showroom, Delhi), the Urban Cruiser is currently the second most affordable model in Toyota’s India line-up, after the Glanza. Consequently, it is positioned to give the Japanese automaker greater access to the mass segment existing at the lower end of the Indian car market.

In a recent interview with Autocar India, Naveen Soni, senior vice president, sales and customer service, Toyota Kirloskar Motor, said, “Since we are entering into the compact SUV segment for the first time, we expect a lot of first-time buyers. Not only first-time Toyota buyers, but new car buyers also get attracted to this segment.”

While buyers of typical Toyota models, like the Innova and Fortuner, have been found to be above 40 years of age, on average, the Urban Cruiser, by the virtue of being a more affordable offering, will also appeal to a younger demographic. “Basically, that is what we are trying to achieve – a wider audience,” he added.

Moreover, the growing popularity of sub-four-metre SUVs is expected to draw customers from other car segments as well. “Also, there is a customer who is coming from the lower-end of the market, maybe sometimes the A-segment or the second-hand car market, graduating into this (compact SUV) segment,” said Soni, confident that by casting a wider net his company would capture fresh customers

With the Glanza raking in sales of 28,542 units (till end-August 2020) since its launch over a year ago, Toyota envisages the Urban Cruiser to be yet another volume driver. Projections of increased volumes have given the carmaker the confidence to expand into new markets in the country.

Elaborating on the company’s retail network strategy, Soni commented, “We are expanding very, very rapidly in terms of number of outlets, not in the A- and B-class cities, but in the C- and D-class cities – the smaller townships and rural India. That’s where we are adding about 50 plus outlets with this new product (Urban Cruiser) launch. We are focusing on both, sales and service, for these rural townships.”

With its latest expansion drive, the auto major is making efforts to increase its footprint in central India, as well as the north-east region. While traditional Toyota utility vehicles (UVs) wouldn’t find much traction in these areas, the Maruti Suzuki-derived hatchback and compact SUV stand a much better chance at cracking the new markets.

“Rural penetration will give us a reach penetration into the Indian car market. 84 percent is what we’re covering with the increased penetration. It would be more than 84 percent of the (Indian) car market, wherever it exists, we’ll be there,” said the company’s sales and service head.

Toyota design and service to be key differentiators

While a competitive price is crucial, Toyota’s attempt at differentiating its latest product through bespoke design elements is also expected to appeal to prospective owners. The carmaker has revised the front-end styling of its Maruti Suzuki Vitara Brezza derivative by tweaking ‘soft parts’ like the grille and front bumper, giving the Urban Cruiser a distinct identity that’s in line with larger Toyota SUVs.

As always, customer service – a particular Toyota strongpoint – is touted to play a significant role in attracting buyers. “It’s the price, looks and experience that are important. For us, what is going to be important is that we have that kind of differentiated strategy for the customers,” commented Soni.

In the past three fiscal years, Toyota’s market share in India has remained largely constant, at around 4 percent. With a wider retail network in place and products like the Glanza and Urban Cruiser positioned in the heart of the market, along with more models from its partnership with Suzuki to follow, Toyota India seems poised to bolster its sales in the times to come.