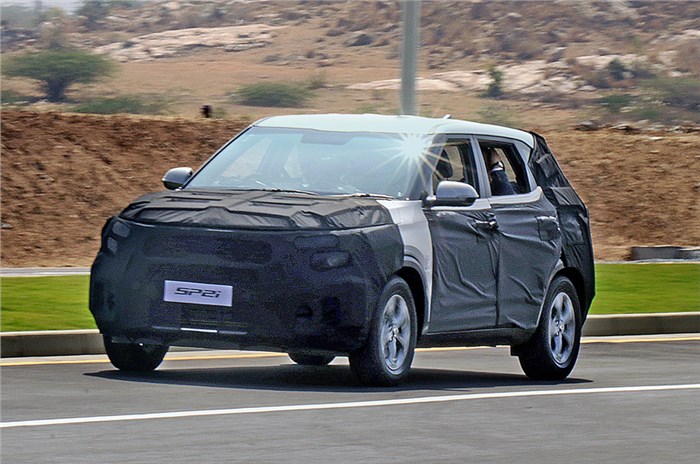 Kia’s first SUV for India will be priced in the range of Rs 10-16 lakh when it launches later this year.

Kia Motors India is gearing up to introduce its first product in India, the SP2i SUV, in the coming months. This new SUV will be built on the brand’s first (globally 15th) plant at Penukonda, Andhra Pradesh, where trial production of the vehicle has already commenced.

The company showcased a close-to-production prototype of the new SP2i SUV recently. While the key design elements of the new Kia SUV are still under wraps, the details that can be gleaned from the prototype include a squarish look, Kia’s signature Tiger Nose grille and 205/65 R18 tyres with gunmetal grey finished alloy wheels, which are likely to be on offer on the top-spec trim.

Key rivals to the Kia SP2i will be the popular Hyundai Creta, the Renault Captur and the recently launched Nissan Kicks. Interestingly, all three rival SUVs come with the same tyre size – 215/60 R17 – which is a tad smaller than the Kia SP2i prototype’s. However, they do come with diamond-cut alloy wheels with a machined finish.

While the production Kia SP concept-based SUV will be focused on Indian buyers, the model will also be sold in many global markets like North America, Australia and even China, where the launch timeframe will be similar to that of India.

The company is likely to unveil the production-spec SUV based on the SP concept at the upcoming New York Auto show 2019 that takes place in April. While the Indian version of the SP concept would differ slightly, the model will come feature-laden with colour-coded interiors, a large touchscreen infotainment system and a first-in-segment digital instrument cluster.

Engine options on the Kia SP2i include a 1.5-litre petrol and a 1.5-litre diesel, with both likely to be BS-IV compliant at launch and upgraded to BS-VI close to the official deadline for compliance.