The bestselling model in the month of July 2019 is the new Maruti Suzuki Wagon R. 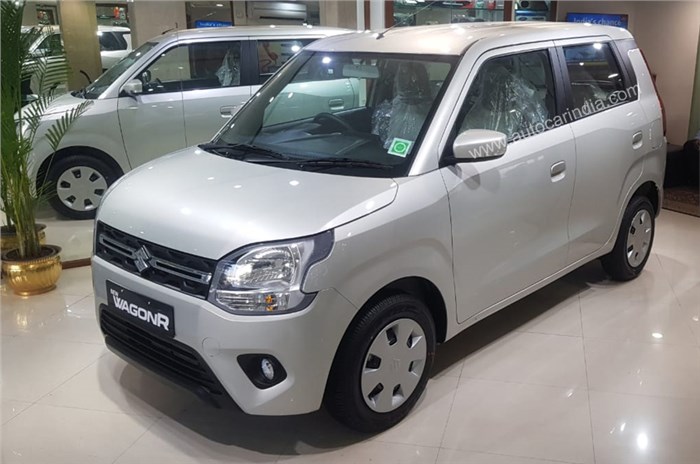 The automotive industry is contending with a deep-set slowdown and sales numbers that have fallen as much as 30.98 percent last month. As a result, July 2019 has thrown up a new No 1 on the Top 10 list – the new Maruti Suzuki Wagon R.

Up from its fifth place in June 2019, the new Wagon R saw total dispatches of 15,062 units in July 2019. The number is also a comment on how bad an impact the ongoing downturn has had on the PV sector because not so long ago, the bestseller would always be in excess of 20,000 units; and was usually a toss-up between the Maruti Alto and the Swift hatchback.

Interestingly, compared to June's 10,228 units, the new Wagon R has shown a considerable improvement in its performance in July. This latest tall-boy iteration has grown in almost all proportions since it's now built on a completely new platform. The Wagon R has also received a BS6 upgrade in its 1.2-litre petrol engine variant.

At No 2 is the Maruti Suzuki Dzire sedan with 12,923 units – down from the 14,868 units it sold in June 2019 and far less than the 16,196 units it registered in May 2019. In fact, a year ago, the Dzire was the No 1 passenger vehicle with 24,465 units, which indicates the massive slide in consumer sentiment. While the Dzire has been a trendsetter in the compact sedan space, Honda’s latest second-gen Amaze is wooing buyers to its side. With dealer stocks aplenty, the Dzire is running handsome discounts in some cities.

The Maruti Suzuki Swift takes third place on the list with dispatches of 12,677 units, down 22.36 percent from the 16,330 units in June 2019. Maruti has recently introduced the BS6 version of the Swift, albeit only in petrol guise. Like with the Baleno, the Swift’s 1.2-litre, four-cylinder K12B motor has been upgraded to comply with the more stringent emission norms. The 1.2-litre petrol engine continues to produce the same 83hp and 113Nm of torque, but has a slightly lower fuel-efficiency figure of 21.2kpl. The 1.3-litre DDiS190 diesel engine has not been updated to BS6, and readies to be phased out.

Additionally, the Swift now also gets more safety features as standard. To comply with AIS-145 safety norms, all variants now get a co-driver seat-belt reminder, a speed-alert system, and rear parking sensors as standard. Previously, only dual airbags, ABS with EBD and a driver's side seat-belt reminder were standard, and rear parking sensors were only available with the top-spec ZXi and ZDi models.

In fourth place is the entry-level hatchback, the Maruti Suzuki Alto with 11,577 units, considerably less than the 18,733 units in June and 18,070 units it garnered in May 2018. The Alto was recently updated with a host of safety features in the wake of the upcoming norms in October, and was also introduced with a BS6-compliant engine – a full 11 months ahead of the April 2020 deadline.

The Alto's premium sibling, the Maruti Suzuki Baleno is at No 5 position with overall sales of 10,482 units in the month. The Baleno was the first in the Maruti stable to receive a BS6 upgrade earlier in April whilst also getting a new 1.2-litre DualJet K12C petrol motor fitted with mild-hybrid technology.

The Maruti Suzuki Eeco van drives in at sixth spot with 9,814 units, slightly more than the 9,265 units it sold in June. One may recall that this expansive vehicle sprung a surprise in May 2019 when it took sixth place with 11,739 units, crossing the 10,000-unit mark since its launch in January 2010, the last instance being April 2019.

At No 7 is the recently launched Hyundai Venue, the Korean carmaker's first compact SUV which debuted in the Top 5 UV charts in the very month of its launch, with sales of 9,585 units. The Venue is the new No 1 and bestselling UV, wresting the crown from the Maruti Vitara Brezza. What is helping the Venue is its aggressive pricing strategy from Rs 6.5-10.84 lakh (ex-showroom, Delhi), four engine-gearbox combinations, which includes an 83hp, 1.2-litre petrol MT; a 120hp, 1.0-litre petrol MT/AT; and a 90hp, 1.4-litre diesel MT, and all of six trim levels – the E, S, SX, SX+, SX dual-tone and SX(O).

The Maruti Suzuki Ertiga MPV is at eighth position and a close second on the utility vehicles sales chart. With dispatches of 9,218 units in July 2019, the Ertiga in its new avatar is going places. With its modern design, ample space, thoughtful features and a value-for-money package, the new Ertiga is ticking most of the right boxes for family and fleet buyers. Of the total 33,736 Ertigas delivered in the first four months of FY2020 and averaging 8,434 units a month, the MPV is setting a good pace and that too in depressed market conditions.

The Hyundai Elite i20 which was No 8 in May 2019, No 6 in June with 9,271 units, takes the ninth spot in July with 9,012 units. The i20 was already feeling the heat from the Maruti Baleno, it now faces new competition in a Toyota avatar, as the new Toyota Glanza.