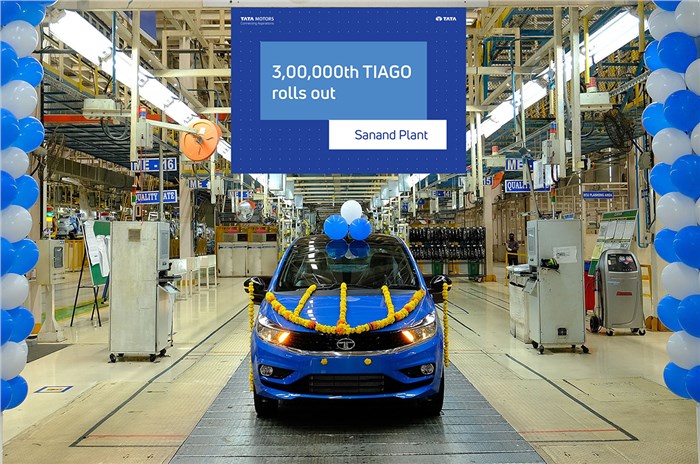 The Tata Tiago hatchback has just crossed a new production milestone, with the 3,00,000th Tiago rolling off the line at Tata’s Sanand facility in Gujarat. Tata has achieved this milestone just four years after first launching the Tiago.

A quick refresher on the Tata Tiago

Launched back in 2016, it was Tata’s offering in the mid-range hatchback segment, and technically a successor to the Indica. It was the first Tata product to use the carmaker’s ‘Impact Design’ philosophy and was also the first of a new generation of Tata offerings in our market.

Earlier this year, the Tata Tiago facelift was launched with significant cosmetic changes as well as some key updates to its features list.

Tata Motors also launched the Tiago JTP – a performance model with a 114hp, 1.2-litre turbo-petrol engine, retuned suspension and sportier looks, but the model was not upgraded for BS6, and shortly after, the entire JTP project was closed down.

What engine does the Tata Tiago come with?

The facelifted Tata Tiago comes with a sole 1.2-litre, three-cylinder petrol engine which produces 85hp and 114Nm of torque. The hatchback can be had with either a 5-speed manual or a 5-speed AMT automatic gearbox.

The previously available 1.05-litre diesel engine option was dropped from the line-up with the facelift. It is also worth mentioning that in the transition to BS6, the petrol-manual Tiago’s ARAI claimed fuel economy has dropped by almost 4kpl when compared to its BS4 counterpart.

What does the Tata Tiago compete with?

The Tata Tiago competes in the mid-range hatchback segment, where it takes on the Hyundai Santro, the Maruti Suzuki Celerio and the Datsun Go.