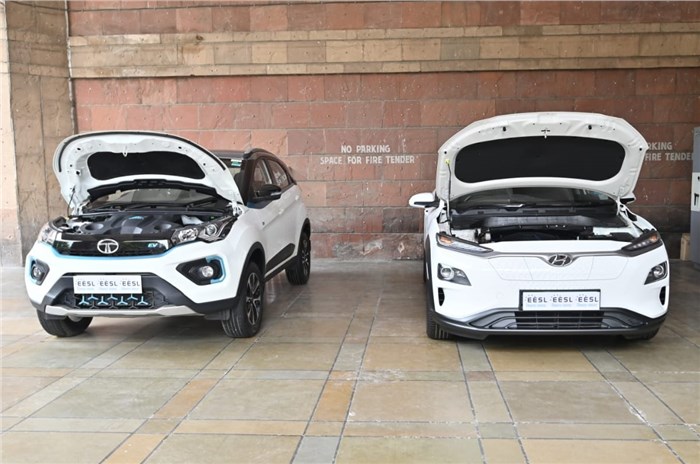 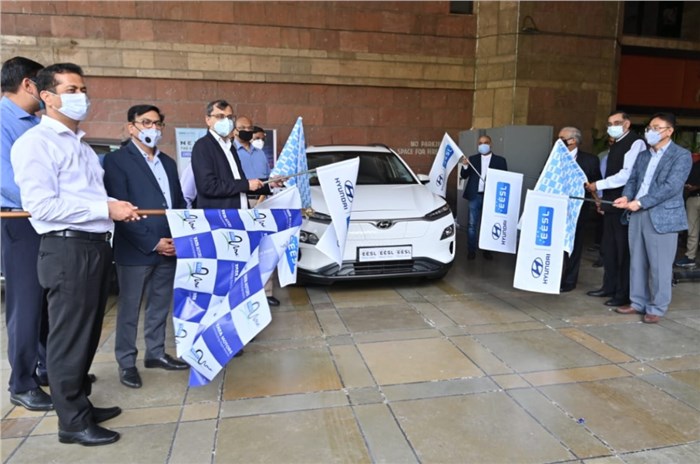 Energy Efficiency Services Limited (EESL) has announced today that it will procure two new all-electric SUVs – the Tata Nexon EV and the Hyundai Kona Electric – in a bid to promote the adoption of cleaner mobility in the government. The fleet of 250 EVs will replace the replace the existing fleet of petrol and diesel vehicles of the Central and State Governments.

Hyundai has confirmed that it has received an order of 100 Kona Electric SUVs from EESL. Tata Motors, meanwhile, will supply 150 units of the Nexon EV. Hyundai also confirmed our report from October last year that the brand had already supplied 10 units of the all-electric SUV to EESL.

Both models will be procured by EESL at a subsidised rate. The Hyundai Kona EV, which is priced at Rs 23.7 lakh (ex-showroom, India) will be bought at an 11 percent  lower rate (21.36 lakh), while the Nexon EV’s price will be down by Rs 13,000 (0.87 percent) from Rs 14.99 lakh (ex-showroom, pan-India). The price tag for the all-electric Tata also tells us the mid-spec Nexon EV XZ+ is the one that will be supplied to EESL. Here are all the features you get with this variant of the all-electric compact SUV.

Both models have been bought with the standard 3-year warranty pack, though both EVs also get a separate 8-year warranty for the battery pack.

Until now, EVs that have been supplied to EESL have come from Tata Motors – the Tigor EV – and Mahindra – the eVerito. The initial response to these EVs was not as positive as EESL had hoped, with a common complaint being the low range offered. This prompted Tata Motors to launch an updated Tigor EV, which came with a bigger battery (21.5kWh versus the earlier 16.2kWh) and improved range on a single charge (213km, compared to the earlier 142km).

The Kona Electric and Nexon EV should be able to alleviate those concerns, as they come with a 452km and 312km ARAI-rated range, respectively. However, our in-depth road test of the Hyundai Kona Electric and the subsequent comparison with the MG ZS EV showed that in the real world, a range of around 250km is more likely – this would also vary based on the manner it is driven. Similarly, the Tata Nexon EV’s real-world range is also expected to be lower than the ARAI test figure.

The all-electric Hyundai comes with a 39.2kWh lithium-ion battery pack that powers an electric motor rated at 136hp and 395Nm of torque. While the claimed 0-100kph time is 9.7sec, we managed an impressive 9.09secs in our road test. Hyundai claims the Kona’s batteries will fully charge from zero in around six hours using a 7kWh wall box charger, though a standard three-pin charger takes about 19 hours.

The Korean brand recently introduced what it calls its Wonder Warranty pack for the Kona Electric, which is essentially a variable warranty option. For more details on the warranty pack, click here.

The Tata Nexon EV is powered by the brand’s Ziptron electric tech – a 30.2kWh lithium-ion battery pack powers a motor mounted on the front axle. This electric unit produces 129hp and 245Nm of torque, which helps the Nexon EV sprint from 0-100kph in a claimed 9.9sec. Tata says that a standard 15A AC charger will take about 8-9 hours to charge the battery to 100 percent. It was just two weeks ago that Tata had announced that Nexon EV production had crossed the 1,000 unit mark.