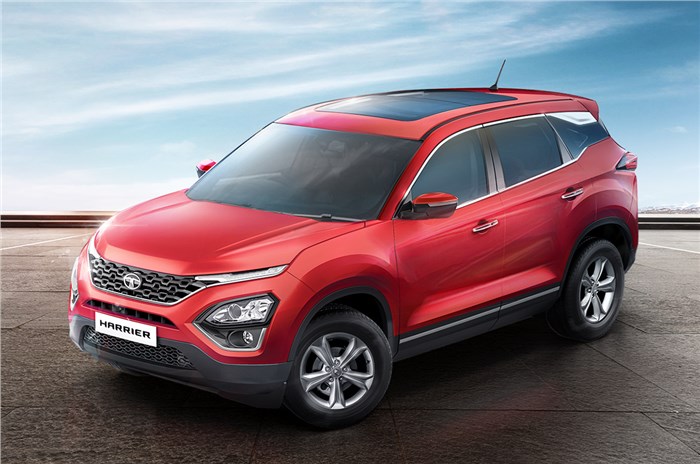 For the Rs 40,000 premium over the Harrier XT, the XT+ variant adds a panoramic sunroof.

The Tata Harrier XT+ variant has been introduced to the SUV’s line-up, priced at Rs 16.99 lakh (ex-showroom, Delhi). The party piece of the Harrier XT+ is the panoramic sunroof, for which you pay a Rs 40,000 premium over the XT variant. Tata Motors has announced that prices are introductory and will be revised after October 1, 2020.

What other features does the Harrier XT+ get?

Other than the panoramic sunroof, which comes with an auto-close function after parking and when it senses rain, the features list of the XT+ variant is the same as the Tata Harrier XT. Safety kit such as dual front airbags, hill-start assist, traction control, front fog lamps, rear parking sensors and a rear parking camera are on offer. The XT and XT+ also get automatic projector headlights, LED DRLs,17-inchalloy wheels, a 7.0-inchtouchscreen Infotainment system with 6 speakers(4 speakers and2tweeters), Android Auto and Apple Car Play connectivity, steering-mounted audio controls,push-button start, auto climate control and automatic wipers.

In the Harrier range, the + denotes a sunroof, and so the next variant in line, the Harrier XZ,does not get a panoramic sunroof even though it costs Rs 66,000 more than the XT+, but it does getquite a bit more safety kit and features on offer. The Harrier XZ gets six airbags, Isofix child seat mounts and hill-descent control, along with HID Xenon projector headlights, leather-wrapped steering wheel and gear shift knob, a 9-speaker JLB sound system, a larger 8.8-inch touchscreen infotainment system, a 7.0-inch digital display in the instrument cluster and 60:40 split-folding rear seats. Dual-tone exterior colour options and the Dark Edition are also only available from the XZ variant onwards.

Before the arrival of this new variant, one would have to spring for the top-spec Harrier XZ+ (Rs 18.90 lakh). This means that getting a sunroof-equipped Harrier is easier on the pocket by Rs 1.91 lakh.

The Harrier XT+ is mechanically identical to the other manual variants. It is powered by a 170hp, 2.0-litre diesel engine that sends power to the wheels via a 6-speed manual gearbox.

The arrival of the Harrier XT+ follows the launch of the Tata Nexon XM(S) and XMA(S), the most affordable car in India with a sunroof. It seems like Tata Motors is keen on making this premium feature accessible to a larger section of the market.

The Tata Harrier’s closest rival on size and spec is the MG Hector. Not to be confused with the more recently launched 6-seat Hector Plus, MG Motor India’s debutmodel also comes with a panoramic sunroof, though only in the top-spec Hector Sharp variant. In diesel form, the Hector Sharp is priced at Rs 17.88 lakh (ex-showroom, India), but gets kit not available on the Harrier such as e-SIM-based connected car tech, a 360-degree camera and heated ORVMs.

The Hyundai Creta is another SUV will a panoramic sunroof in this segment – the Creta SX and SX(O) are both equipped with the feature and are priced at Rs 14.51 lakh and Rs 15.79 lakh (ex-showroom, India) , respectively, in diesel form. While the Harrier is not the most affordable SUV with a panoramic sunroof in its segment, its value quotient will definitely increase thanks to this addition.

TataNexon XM(S) launched; is most affordable car with a sunroof

TataNexon EV, Hyundai Kona Electric to be supplied to EESL