Tata’s answer to the likes of the Hyundai i20 Turbo and Volkswagen Polo TSI will arrive on January 22. Here’s how the Altroz iTurbo fares in comparison, on paper. 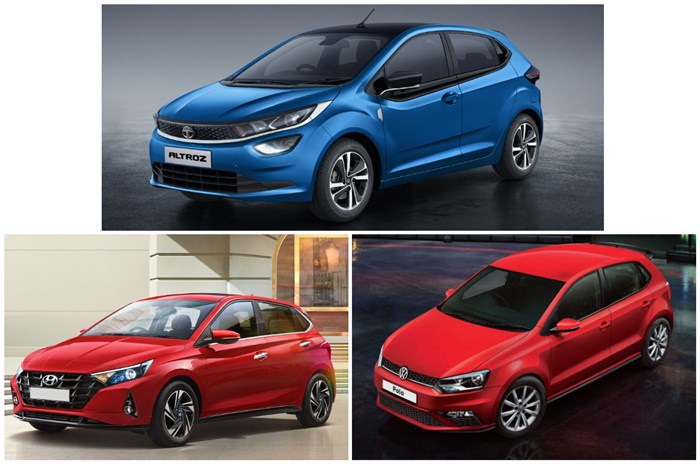 With the Tata Altroz iTurbo, the brand has entered the niche market of turbo-petrol premium hatchbacks. Its only rivals, for now, are the Volkswagen Polo, which comes with the brand’s TSI engine andthe Hyundai i20, which shares its turbo-petrol unit with the Venue. We put the three go-faster premium hatchbacks together, on paper, to find out how the Altroz iTurbo matches up.

How big is the Altroz iTurbo?

The Altroz is larger than the Polo on every size metric but wheel size; all three premium hatchbacks get 16-inch alloys in their respective range-topping forms. Tata’s premium hatchback is a good 19mm longer, 73mm wider and 54mm taller, with a 32mm longer wheelbase than the Volkswagen, though the latter’s ground clearance is 3mm higher. However, the i20 is 5mm longer, 20mm wider, and has a 79mm longer wheelbase than the Altroz – compared to the Polo, the i20 wheelbase is a significant 111mm longer. However, the Altroz has the largest boot of the lot at 345 litres.

How powerful is the Altroz iTurbo?

Despite the near 200cc advantage over its premium hatchback rivals, the Altroz’s turbo-petrol engine has the lowest output figures at 110hp and 140Nm of torque. The i20’s 120hp power figure is the highest while the Polo has the highest torque rating at 175Nm.

A dual-clutch automatic gearbox for the Altroz iTurbo is in the works and will arrive soon but for now, the Tata is the only turbo-petrol premium hatchback without an auto option. Interestingly, the i20 is the only model here that does not get a standard manual transmission and instead, gets Hyundai’s ‘clutchless manual’ iMT unit.

At the event where the Tata Altroz iTurbo was unveiled, the brand claimed it could sprint from 0-100kph in under 12 seconds. In our tests, the i20 equipped with the 1.0 turbo-petrol engine and iMT gearbox took 11.21 seconds to hit 100kph from standstill while the Polo TSI in manual form did it in 9.97s, showing that output figures don’t tell the full story.

The Polo TSI’s 18.24kpl efficiency figure is 0.11kpl higher than the Altroz iTurbo’s, though the i20 turbo-petrol is significantly more frugal, with a 20kpl ARAI rating in iMT form.

How safe is the Altroz iTurbo?

The Altroz’s credentials as a 5-star Global NCAP model certainly helps its case in the safety department. In 2014, when the safety watchdog had crash tested the Polo, it had achieved a 4-star rating in adult occupant protection. The model tested was equipped with two airbags, but no ABS or ISOFIX child seat mounts. The latter bit is especially interesting as both, the Polo and the Altroz, scored a 3-star rating for child occupant protection. The latest i20 has yet to be tested by Global NCAP.

Before we get into comparing the safety features of the three turbo-petrol premium hatchbacks, there’s a point to note. The Altroz iTurbo will be available in three variants – XT, XZ and the new XZ+ – while the Polo in manual form is just available in the top-spec Highline Plus variant. Hyundai offers the i20 turbo with the iMT in just the mid-spec Sportz and Asta variant; you’ll have to opt for the 1.0 turbo-petrol-DCT version, the 1.2 petrol or the 1.5 diesel version of the i20 if you’d like features such as the side and curtain airbags, hill-start assist, ESC, height adjust for the front seatbelts and ISOFIX child seat mounts.

While the Altroz misses out on a tyre pressure monitor available on the i20, the Tata is the only model here to get automatic headlights. The Polo is the only one here that has an auto-dimming inside the rear-view mirror.

How feature-rich is the Altroz iTurbo?

With the new XZ+ variant, Tata has added kit such as an 8-speaker Harman sound system, leatherette seat covers and the IRA in-car connectivity tech that has 27 features to the Altroz’s already decent list of creature comforts and technology.

The Altroz also gets a segment-first drive mode for the engine and front and rear centre arm rests; the Polo has one for the front seats. The Tata is overall better equipped than the Polo, but the Volkswagen does get a steering unit that adjusts for rake and reach.

Even though the i20 turbo-iMT is not available in top-spec form, it is still the segment-leader in the tech department – a 10.25-inch touchscreen, wireless smartphone charging and Hyundai’s Blue Link in-car connectivity suite (with a claimed 50 features) are on offer. Features such as a powered sunroof, adjustable rear headrests, a rear centre armrest and cruise control are only available on the top-spec Asta(O) variant.

How does the Altroz iTurbo compare?

The 120hp Hyundai i20 turbo with the iMT gearbox is available in the mid-spec Sportz and Asta and is currently priced between Rs 8.80-10.05 lakh*. Meanwhile, the Volkswagen Polo TSI Highline Plus MT costs Rs 8.34 lakh.

Tata’s penchant for adopting an aggressive pricing should extend to the Altroz iTurbo as well; we estimate prices to be in the Rs 8-10 lakh (ex-showroom) bracket. The i20 offers a lot of tech and a decent amount of kit, but some goodies are missing in the iMT gearbox-equipped version. The Polo, meanwhile, is smaller than its rivals and comes across as dated in comparison. Still, the VW has a strong following for the performance and build quality on offer.