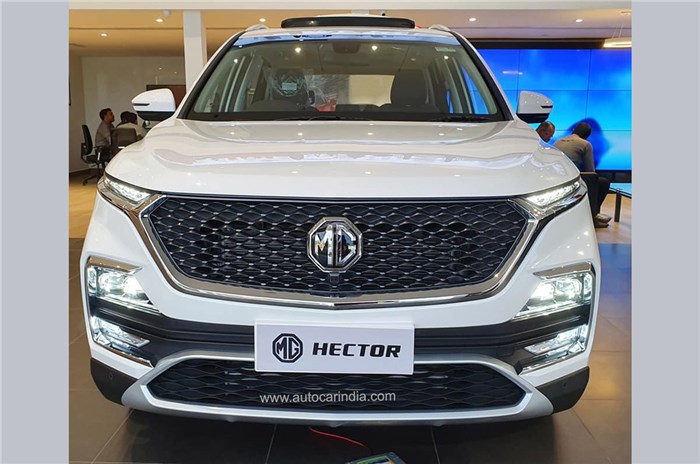 The MG Hector SUV has driven past the 50,000-unit sales mark in the Indian market. Launched on June 27, 2019, the sales milestone comes 21 months after the Hector was introduced in the competitive Indian market and a month after the 50,000th unit rolled out of the Halol plant in Gujarat.

As per our sister publication Autocar Professional’s data analytics, MG Motor India has till end-March sold a total of 53,265 units of the Hector, which makes for a monthly average of 2,536 units.

The MG Hector is available in a total of four diesel variants, two petrol-manual variants, two petrol-automatics and three petrol-hybrids. The SUV, comes powered by a 1.5-litre turbocharged petrol rated for 143hp and 250Nm and a Fiat-sourced 2.0-litre diesel that develops 170hp and 350Nm of torque, both available in their BS VI compliant avatar. The petrol engine also comes in a 48V hybrid form and with a CVT and DCT automatic options.

On January 7, 2021, MG Motor India introduced the new seven-seater Hector Plus to complete the entire MG Hector line-up to now offer configurations of five, six and seven seats to suit varied customer requirements. While the six-seat MG Hector Plus was launched in July 2020 and comes priced between Rs 16 lakh and 17.75 lakh, ex-showroom, the seven-seat variant has been introduced between Rs 13.35 lakh and Rs 18.32 lakh, ex-showroom, all-India. The company offers the MG Shield package that offers five-year warranty, road-side assistance and labour-charge free five services on the Hector range.

In the Indian market, the MG Hector goes head-to-head with the Tata Harrier and Mahindra XUV500 in terms of its sheer size even while its pricing takes it close to the likes of the Hyundai Creta. Now, there’s a new competitor that’s coming soon – the Hyundai Alcazar seven-seater SUV.