MG is looking to create a niche for itself in its segment by offering features on the Hector that have not been offered previously. Here’s a list of features the SUV debuts in its class. 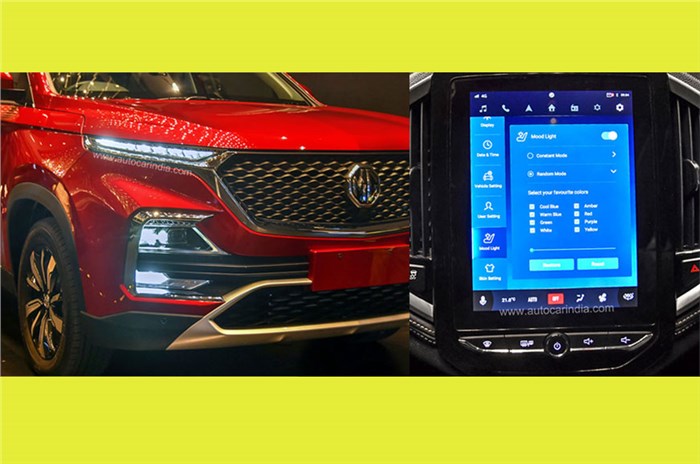 MG has officially revealed its Hector SUV for our market and detailed the features it will come equipped with at launch. Among the items on its extensive list of equipment, the MG Hector will also debut some segment-first technology and features. Considering the competitive segment that the Hector is entering – with rivals like the aggressively priced Tata Harrier, the feature-rich Jeep Compass and the practical Mahindra XUV500 – the MG SUV’s unique kit should help to bring in buyers.

Here’s a compilation of the most important segment-first features that the MG Hector will come with:

The Hector will be the first car in its segment to sport in-car internet connectivity via a SIM card and over fifty features. Internet connectivity also makes it possible for MG to provide over-the-air (OTA) software updates for the Hector, as well as provide Geofencing, which sends out an alert if a car leaves an area pre-assigned by the owner. The Hector also comes with a mobile application through which the vehicle's basic functions can be remotely controlled, such as the AC, sunroof, doors, and so on. Some of these functions can also be contorlled via voice commands.

The 48V mild-hybrid system is only available with the Hector petrol variant – MG claims a 12 percent improvement in mileage and an 11 percent reduction in emissions when compared to the standard petrol model. The mild-hybrid system also provides up to 20Nm of additional torque at low speeds to help counter turbo lag and provide better acceleration in stop-start city traffic.

The 10.4-inch HD touchscreen is a vertically oriented unit (similar to the layout seen on many a Volvo) and is the largest infotainment screen available in the segment. The screen displays the feed from the 360-degree parking camera and the built-in satellite navigation system, along with other pre-installed applications such as AccuWeather, Gaana and more.

The MG Hector is the first car in the segment to feature LED headlights, tail-lights and rear fog lights. Even the turn indicators integrated in the ORVMs are LED lights. The headlights also sport a split-headlight layout – which means the LED DRLs are positioned on either side of the grille while the main headlights are lower down on the bumper. The LED DRLs also double as dynamic turn indicators. The taillight design features a light bar that runs across the boot and connects the taillight units.

All cars nowadays come fitted with rear parking sensors in order to comply with the upcoming safety norms. The Hector however, gets front parking sensors as well, which makes the job of parking the large SUV that much easier.

The exterior rear-view mirrors on the Hector are heated; and due to this feature they aid visibility in rainy and cold weather conditions. None of the Hector’s rivals currently offer this feature. The ORVMs are also electronically adjustable and foldable.

The Hector also gets a powered co-driver seat, which is four-way adjustable. The driver seat is also powered but it offers six-way adjustability. This ensures that both the driver and co-driver can find their ideal seating position with minimal effort.

The tailgate on the Hector is fairly large. To circumvent this, MG has equipped a powered tailgate on the car which can be opened and closed with the touch of a button. This is not to be confused with a hands-free tailgate, as those open automatically when the key is within certain proximity of the tailgate.

The cabin of the Hector comes with ambient/mood lighting that can be set to display any of the eight preset colours. This gives the interior an upmarket feel and also makes the Hector the only car in the segment to offer this number of lighting options.